Revisiting the Nizams of Hyderabad

The photographs that will be presented are a result of Deepthi’s 15 plus years of research on the Nizams of Hyderabad. 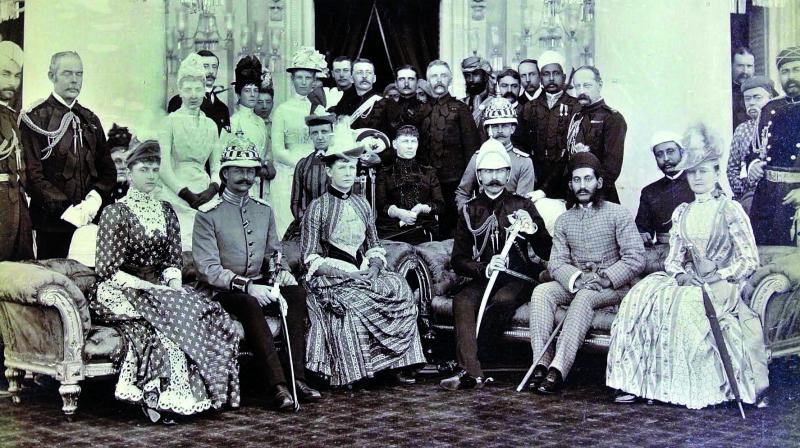 Art historian Deepthi Sasidharan talks about her upcoming lecture in Mumbai, the joys of studying 19th-century photography and the current state of heritage conservation in India.

If you were unable to visit the ongoing Jewels of India: The Nizam’s Jewellery Collection exhibition at the National Museum, Delhi, fret not, for veteran art historian and curator, Deepthi Sasidharan will present 19th century photographic representations of these very jewels and lots more during her upcoming lecture at Dr. Bhau Daji Lad Museum. Titled Hyderabad of the Nizams: Visual splendor through 19th-century photographs, Deepthi’s lecture will take us back in time to when the rich and powerful Asafjahi Nizams (the seven Nizams who belonged to the Asaf Jah dynasty), ruled Hyderabad. These photographs, which have been sourced from various archival collections, capture the sartorial finery of the Nizams, their palatial abodes and richly studded crown jewels, courtly life, and royal relationships.

Talking about the lecture’s connection to the Delhi-based exhibition, Deepthi says, “The Government has its own collection of Nizam’s jewels and they are on display after more than a decade. The phenomenal collection is home to one of the world’s largest diamonds – the Jacob Diamond, and other extraordinary precious stones and jewellery items. Along with presenting photographs of these jewels, my talk will reveal how the Government came to acquire them from the Nizam. The photographs will also help you understand what Hyderabad was like under these rulers.”

The photographs that will be presented are a result of Deepthi’s 15 plus years of research on the Nizams of Hyderabad.  She recollects how in the early 2000s, the Chowmahalla Palace in Hyderabad underwent massive restoration work, and a young Deepthi found herself on the team of experts that put together the Palace Project at Chowmahalla. “We lived and worked in the Palace for about 15 years,” she says and during this time, Deepthi documented photographs of the Hyderabad of the Nizams. During the course of her work, she sourced photographs from rare books, Government of India, Palace and private collections scattered over several states and countries. These photographs eventually culminated into a book published last year, Treasures of the Deccan: Jewels of the Nizams, which was co-authored by Deepthi. “It’s a coming together of larger studies. I can’t really say there were exciting stories; it was quite boring,” jokes Deepthi when asked about the painstaking work involved in sourcing these photographs.

It was during her time at the Chowmahalla palace that Deepthi fell in love with photography and the process of documenting photographs. When asked what she loves about it, the art historian says, “When I started studying photography, I was immediately drawn to it because there was nobody to tell me enough about it. So it became one of those things where you keep learning on your own. Secondly, it’s visual and, unlike reading a book, when you look at a photograph, information stares you right in the face. Also, there are so many photographic processes that are no longer used, and I get to preserve images made using them. I think I’ll continue working on photographs my entire life because it’s just so captivating.”

And the photographs presented during Deepthi’s lecture will be captivating for us too because the art historian says that apart from getting a peek at the Nizams’ larger than life lifestyle, we will also get to see the not so glamorous parts. “The Nizams were real people. The seventh Nizam lived to see the independent princely state of Hyderabad be incorporated into the Union of India.  And the fact that the Nizams jewels are on display at the National Museum tells us so much about how fortunes can change in one generation. Today, these jewels belong to the people of India,” Deepthi points out.

But for these learnings to reach us, heritage must be conserved and documented. Deepthi, who is the Co-founder of the cultural advisory Eka Cultural Resources and Research and has worked on several heritage and museum projects like Kalakshetra in Chennai, City Palace, Udaipur and is currently working on the Moda Goa Museum, the redevelopment of the Bastion Bungalow in Fort Kochi and a heritage project for the Mumbai Police, says that while a lot needs to be done on the conservation front, architects and conservators are doing their best with the means available. “There’s definitely room for more, but conversely, we are doing enough given the kind of funding we receive. Architects and conservators work very hard putting together the meager resources they have to conserve the enormous heritage we have begotten. But help and awareness are welcome because it’s a cyclical thing. When I talk about the Nizams of Hyderabad, people want to know more about them. Interest in a subject makes you want to preserve it. So, a lot is being done, but a lot more can be done, not only for building conservation but material conservation too, like textiles and books,” she concludes.