The artist is now collecting stories which revolve around the moon and comparing how they are similar or different from one culture to another. 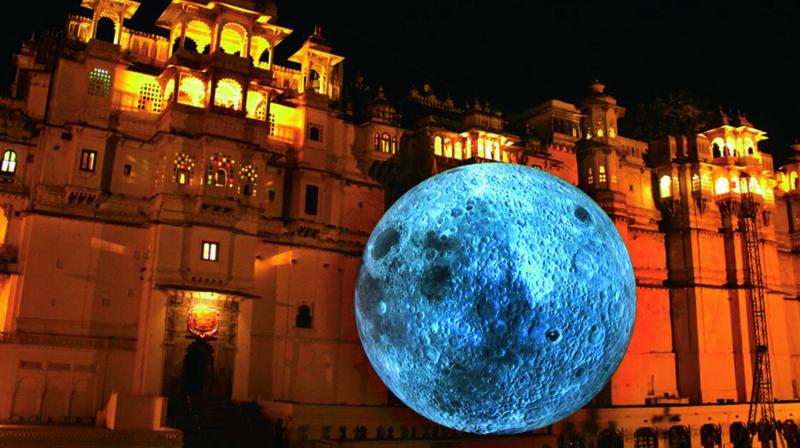 The 23-feet wide replica of the moon features details of the surface of the moon using imagery from Nasa’s Lunar Reconnaissance Orbiter Camera.

There’s a lovely big moon in the inky spring sky. And another beautiful moon was drawing large crowds in the capital last week.

A 23-feet replica of the moon, titled Museum of the Moon, created by British artist Luke Jerram, was installed at The British Council to mark the end of the India-UK Year of Culture.

“About 15 years ago I had an idea to make a replica of the moon. Before gas lamps and electricity, the moon was the only source of light at night, plus it was used for navigation. But living in cities now illuminated heavily by electricity, we have become disconnected with the moon. I hope this project restores a sense of wonder, inspires questions and reconnects people with the night sky,” says Luke, who has been creating sculptures, installations and live arts projects for 20 years. He has created a number of extraordinary art projects which have inspired people around the globe.

“I like the idea that we’re all creative and through collaboration anything is possible,” says Luke. He has specialist teams of engineers, craftsmen and technicians help him realise his works. This, he says, ensures “I’m only limited by my imagination in what can be produced.”

The artist is now collecting stories which revolve around the moon and comparing how they are similar or different from one culture to another. He says, “For eons, the moon has impacted society and culture, it’s been worshipped as a deity, used as a timekeeper, inspired artists, poets, scientists, writers and musicians worldwide, every culture and country. The moon has inspired so much music, mythologies and literature. The moon gets interpreted in all these different ways. It is obviously very important for different religions as well.”

The artwork was created using Nasa’s Lunar Reconnaissance Orbiter Camera and with the UK Space Agency. But the initial process of research wasn’t easy, nor was raising funds. “Originally I presented it in Hong Kong and they said no. Then I thought I would do it anyway. We got funding and support from different places for this project,” shares Luke.

Initially, there was no technology to make a perfect replica. It was possible only after 2010 when Nasa sent a satellite to orbit the moon thousands of times to create an imagery, which was then printed on the surface of the balloon. “The nice thing about the artwork is that when it is in a dark space, it doesn’t look like a balloon, it looks like the moon. Sometimes people even ask if it is made from concrete or fiber glass. At times it creates an optical illusion, where each detail is defined so beautifully.”

The exhibit had its own soundtrack by Dan Jones, giving the audience a wholesome experience. Talking about the soundtrack Luke says, “I gave Dan a brief, expressing my ideas about the moon. He created a 23-minute long musical composition, and in there are recordings from Nasa and space machines, and also sounds of the sea and of moths. It’s a beautiful soundtrack.”

Museum of the Moon has travelled across several countries and been met with a mix of amazement, enjoyment and pleasure. “In this tour we had four people dressed as astronauts in Bengaluru and they rode in slow motion to the gallery. Last year we presented the artwork above a river, 30,000 people came and it was so crowded that two people fell in the river. The responses have been wonderful. A seven-year-old girl asked me if I was going to put the moon back afterwards, she thought I was still in the moon and she was a bit worried whether it was going to be put back in time!” he laughs.

Signing off Alan Gemmell, OBE, director, British Council India, says, “2018 marks 70 years of the British Council in India. We’ve been inspired every day of the last 70 years by the artists, students, scientists and policy makers we’ve worked with across India. This year, we want to share the stories of the great things we’ve done together, tell new stories, and inspire millions of young people to develop connections for the next 70 years. We hope our own moon landing at our home on Kasturba Gandhi Marg will be talked about for years to come.”