The idea of the book germinated while he was having a cup of tea from a roadside vendor and it was ‘delicious because of the extra sugar in it’. 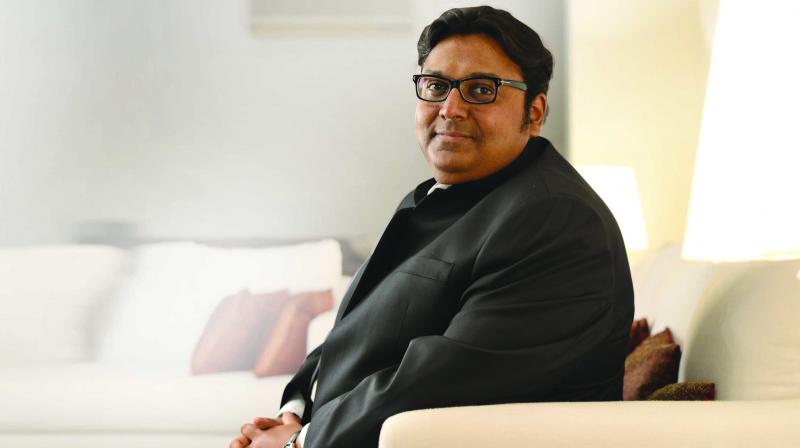 Author Ashwin Sanghi in a freewheeling chat talks about his new book, his love for mythology and how he ensures a balance between the mythological aspect and the thrilling aspect in his books.

India and China, two distinct countries yet they both have threads of culture and history connect the two with each other.

And in order to explore that thread of commonality, recently, author Ashwin Sanghi launched his book at the Jaipur Literature Fest titled, The Vault of Vishnu. The novel is Sanghi’s sixth in the Bharat series, which included other books under the Bharat series— The Rozabal Line and Chanakya’s Chant.

The novel explores the journey of four characters; a Pallava prince travelling to Cambodia in order to be a king; a Buddhist monk trekking to South India in order to make his emperor powerful; a scientist who decodes ancient texts; and caught in all the mess is a young investigator, who is racing against time to ensure balance of power in the world is maintained.

The idea of the book germinated while he was having a cup of tea from a roadside vendor and it was ‘delicious because of the extra sugar in it’. “He (the tea seller) kept saying ‘Cheenee maar ke’—an expression, which indicates that he had been generous with the (amount of) sugar. It struck me that we call ‘sugar’ by the name ‘cheenee’ meaning ‘from China’,” he adds.

Why was the book titled, The Vault of Vishnu?
There is simply no way that I could answer this question without spoiling the story for readers. Suffice it to say that vaults are used to store valuables and, sometimes, secrets. The novel is about an ancient secret contained in that particular vault.

What was the level of research done for the book?
I invested almost a year in my research: reading books, articles and papers that would enable me to build the historical narrative around this ancient relationship. I had never been to China before. The research was more difficult than usual because of China’s dimensions.

What were the challenges you faced while coming up with the book?
The primary challenge was to figure out how to tie the stories of the three great travellers—Bodhidharma, Faxian and Xuanzang. I used a fictional premise to achieve that objective. The second challenge was deciding which of those three travellers would constitute the parallel track to the modern fictional narrative. The final challenge was how to keep the pace brisk in spite of historical and mythological material.

Out of the three characters — the monk, the prince and the scientist — who was your favourite character among the three while writing the book and why?
It would have to be the prince, Bodhidharma, as he combined the physical workouts with combat moves that he had brought with him from his homeland (India) into the martial art that Shaolin eventually became famous for.

How is this book a testament to your love for mythology?
The delicious (interesting) question is “What if?” What if Rama, Krishna, Shiva or Ganesha were real people—historical characters—who began to be worshipped because of their great deeds?  Some people ask me why mythology fascinates me. The truth is that it doesn’t. It is the overlap of two words “myth” + “history” that results in a new word, “mystery”. That’s what fascinates me.

How does your book spans two great civilizations—India and China. What attracts you about the two civilizations?
In the early fifteenth century, Chinese Emperor Yongle had commissioned the construction of 3,500 ships. Some of these were the largest ships the world had ever known. If subsequent Chinese emperors had kept the maritime tradition alive, the Chinese would have been the greatest seafaring nation of the world. Instead, China turned inwards. Even today, China is not an easy destination. Sure, the pace of development and modernization is breathtaking but the language and cuisine can be challenging. But there is so much history, myth, culture, tradition, religion and philosophy that connects India and China. And that is precisely why we need to understand that there is more that unites than divides us.

How do you handle the mythological aspect and the thrilling aspect of the book?
The biggest challenge in these types of novels is the trade-off between story and research and also the trade-off between pace and information. On one hand, because this is often uncharted territory, there is simply no way to make the story believable without bringing forth that information through the pages. But that often compromise storytelling and pace.  Multiple rewrites and edits were involved in trying to ensure that both research and pace were given due importance.

Your advice for authors.
One: don’t think about being a writer... just start writing. Two: don’t quit your day job… it could be a while before royalties can sustain you. Three: don’t think of yourself as a writer but as a storyteller… words become irrelevant if your story is great.