The joy of being a girl-dad

Fathers are taking to social media with the hashtag #girldad to honour Kobe Bryant by rejoicing the fact that they have daughters. 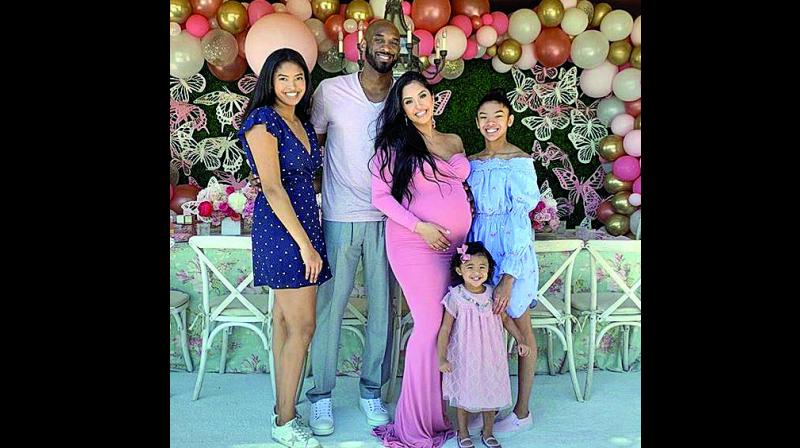 l Kobe Bryant and his family

NBA legend Kobe Bryant, who tragically died recently in a helicopter crash with his daughter Gianna, is being honoured not only for his brilliance on court, but also for being the father of four girls, who never felt the need to have a son to carry his legacy forward. He proudly called himself a “girl dad”.

The hashtag #girldad started trending after the news of Kobe’s death broke out, with fathers around the world sharing pictures of them with their daughters, agreeing that girls are indeed a blessing.

Rudra Dalmia, executive director at Paytm, feels this is a great way of celebrating the legend. In a tweet, he wrote, “As a father of two girls and a huge fan of Kobe and the life he lived, I believe the world has lost a sporting icon and a super-dad who inspired us all. Kobe, my girls are going to make you and Gigi proud .... #babygirlsarethebest ! RIP”

Girls, where they belong

Kobe had revealed in interviews that when he was teased for being outnumbered by women at home and when friends made comments like, “It takes a real man to make a boy,” he would simply say, “Dude, it takes a king to make a princess... get in line.”

Kobe had also always pointed out his thrill at his daughter Gianna ‘living’ basketball and taking it up professionally. He had considered that his professional “legacy”.

Though many dads in India even today battle the guilt of secretly longing for a son to “take their name forward” or “complete the family”, there are many others who consider daughters precious. In fact, dads have gone on record across various platforms that they want a girl child because of the love and warmth they believe only women are capable of giving.

In terms of capability, it is clear that there is really no difference between the sexes. Take, for instance, NCP leader Sharad Pawar, who has only one child, his daughter Supriya Sule. But she is a capable woman who is carrying on her father’s legacy.

Another case is of Dr Vijay Kumar Darla, who established Biological E limited in 1953. The company was the first pharmaceuticals company in South India and the first private sector biological products’ company in India. Dr Vijay has three daughters, the youngest of whom, Mahima, heads the company today. Yet another doctor and entrepreneur Dr P.C. Reddy, who founded the Apollo Hospitals, has four daughters — all of whom are successfully involved in his business.

While it is a joy to have any child, here is what #girldads have to say about their blessings.

Dr Hemanth Nandigala, Managing Director Virchow Biotech, has one daughter. “I have always felt that a daughter can achieve all that a son can. And the best part about having a daughter is that they are emotionally closer and I feel it stays that way even when they grow up!” says Dr Hemanth.

Anirudh Khaitan, Vice Chairman, Khaitan Education Centre,who has mostly been surrounded by women all his life, has no complaints. “For one, the love I get from them is incredible,’ says Anirudh. “I have four daughters who are aged between 2 and 21 years. My mum has nine sisters and I have two!”

Then joking that he wouldn’t know what to do if he had a son, Anirudh reveals that he is excited about having his eldest daughter join him at work soon. Carrying the example from home, Anirudh, who has mostly women in the top management of his companies, insists that he cannot see any differences between men and women.

“The idea that women are the weaker sex is just a label given by society, but research proves there is no difference between how men and women think,” he explains.

Even if it is a hashtag that’s reminded men to go out and praise their daughter(s) on social media, it is heartening to see fathers wear their love for their daughters on their sleeve especially in a country with a very high number of female infanticide cases.