40 years of setting the stage

As the iconic Mumbai institution clocks in four decades, those associated with it walk down the memory lane. 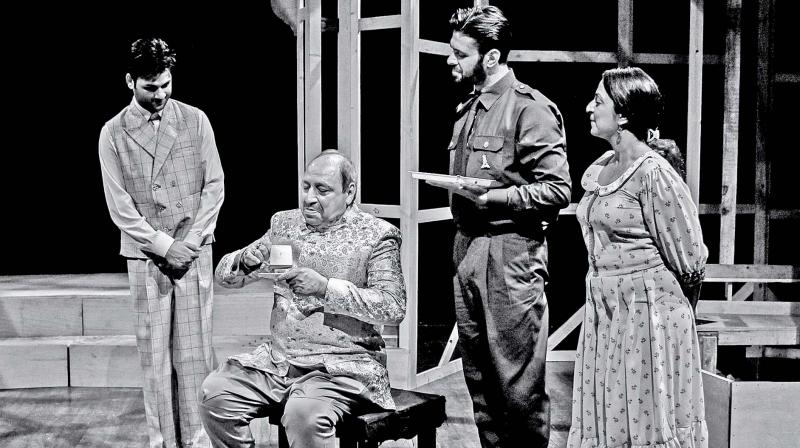 Right after wrapping up the filming of Junoon, Jennifer Kapoor invited a young Naseeruddin Shah to Prithvi Theatre Workshop that was being constructed at Janki Kutir in Juhu. Aware of Nasser’s love for the art, she encouraged him to rehearse in the auditorium. “Only the stage was built by then and Jennifer was kind to let me utilise the space,” reminisces the veteran actor who was a part of the first play to be staged at the theatre, along with late actor Om Puri. “I was not even supposed to be a part of Udhwastha Dharmashala. I was there helping Om in odd jobs. But ended up playing a small role of the man interrogating Om, who was the lead.” Forty years later, the 68-year-old thespian’s Motley will be performing their new play The Truth by Florian Zeller at the same venue.

This year’s annual Prithvi Theatre Festival not only marks Prithviraj Kapoor’s birth anniversary but the continuance of Prithvi Theatre’s glorious four decades of nurturing performing arts. To commemorate the day, Prithviraj Kapoor’s iconic play Dewaar will open the weeklong festival. “This play addresses a social issue which was made at a time when we’re at the verge of partition. And if you compare this play to today’s time, it’s still very relevant,” says Kunal Kapoor who wanted to include many of his grandfather’s play for the festival but settled for Dewaar. Revived by theatre director Sunil Shanbag, not much has been changed from the original script. “It was originally written 75 years ago and is around four hours long. The story of two brothers is his way of addressing the issue of partition. We haven’t touched the script much but composed it,” says Sunil who has been a part of the theatre since its inception and has spent nights rehearsing and performing at the venue.

Naseer remembers the first few months since its inception. “They didn’t have a ticket-selling license in the beginning. So Jennifer suggested sending a hat around but we got chavanis in return. The idea was dismissed right away,” laughs the actor who has great regards for Jennifer as he has seen her closely on and off the stage. “I have seen her on stage since I was in the seven or eighth standard. Their company used to perform plays and Kunal was a baby in arms then.

I requested her to come back on stage several times but she never did. I think she really should have,” he adds.

Sunil who practically lived there, recalls how encouraging Jennifer always was of the young talent and let them use any corner of the space available. “In those days, there weren’t many performances so we would get extra days to perform. We performed, stayed overnight, and did another play, stayed back and so on. The foyer outside where tickets are sold, use to be where we’d sleep,” he says.

At a time when Marathi and Gujarati plays were much loved in Bombay, Prithvi Theatre gave space to Hindi theatre with the aim of encouraging artists, directors and writes to nurture their skills. Kunal shares that the main aim behind building the Prithvi Theatres was to have a performer-friendly space.

“I remember conversations when I was 13 about how a road is to be named after Prithviraj Kapoor or a statue of him will be erected. But my father worked on his father’s dream of having a theatre and built one. The idea was to have a place without any distance between the performer and the audience. With low rentals and a fully equipped space, the aim was to encourage people to perform. And we don’t have a gate, there’s always an open access. The place has always been for the audience and for the performer. It is not about us or the name,” he asserts.

And over the years, the veterans have hardly seen any change in the functionalities of the theatre. “They hardly charged any rent then. I think one rupee per ticket sold which was taken as a token rent just to encourage people to use the space,” says Sunil. A trend started by Jennifer of keeping ticket rates low on Tuesdays and Wednesday to encourage young talent still continues. “If you wanted something sorted, she was always there. She invested a lot of time in the theatre making sure it is established in the right way. Especially to the younger people, she was extremely encouraging,” he adds.

Actor-writer-director Makarand Deshpande who has been performing at the theatre since the 90s remembers paying seven or 10 rupees per ticket sold. “We use to enter secretively into the theatre for rehearsals. We were caught only because one of my members was seen brushing his teeth one morning,” he laughs. “Prithvi theatre has been absolutely wonderful for the companies and audience and there can’t be a better place to perform. The audience is seated so close that they can almost hear you think and pause,” he adds.

Makarand recalls a nervous moment when he was directing Sanjana Kapoor in Tagore’s Chitra and his audience comprised Shashi Kapoor. “Sanjana was to be hanging upside down from a rope. The play went well and he liked Sanjana’s acting. He liked the design of the play and said that my actors were fabulous,” he smiles remembering the time he faced his ire for using too many colours in a play.

Another of Jennifer’s rule of disbarring latecomers from entering is still applicable. Naseeruddin remembers facing the wrath of the audience for the rule and reveals,  “On two or three occasions we had latecomers banging on the door. In one incident there were two girls who barged backstage while the play was on. I was waiting for my entrance and they started squabbling with me as to why they were not allowed. I told her it is your rule so help us enforce it,” he smiles

Over the years
Being a space that witnesses the evolution of theatre over the last 40 years, Kunal has seen a growth in the number of shows and audience. “We used to have 30-35 odd shows in a month but now, we have around 50-55 shows a month. But over the last seven-eight years, particularly, I found the audience getting younger. A theatre is not everybody’s cup of tea as you need to really concentrate,” he says.

According to Sunil, the theatre has always pushed performers out of their comfort zone, creating great work. “The thing about Prithvi is that they have always seen themselves as part of the theatre community and not just as space. A lot of festivals that were theme based pushed us to do a lot. The best example is the Musical Theatre Festival, that particularly challenged many to use live music that was not so common,” he says.

Makarand who has written over 50 plays sitting at Prithvi owes one of his biggest collaboration to his place. “In my journey whatever questions have occurred, I found it through the plays I wrote there. If Prithvi weren’t there, my journey wouldn’t have happened. Prithvi made me a theatrewala,” he says.

The only thing Naseer misses about his early days from Prithvi is hanging out at the café as he gets mobbed by aspiring young actors who want to know all about acting in five minutes. “I enjoy the atmosphere of Prithvi and miss hanging out there. I love it. I wish it continues to flourish,” he concludes.