Looking for the bond of trust

When Vibhishana became the outcast in the kingdom of his dicatatorial brother, he sought refuge with Rama much to the chagrin of his trusted vassals. 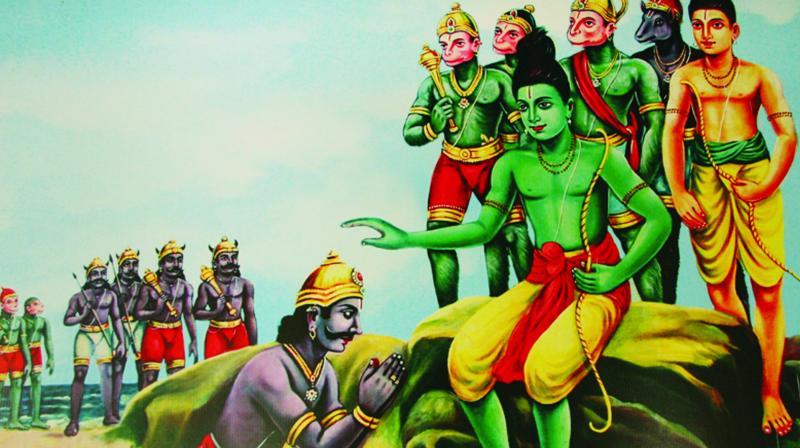 Once again a festival arrives to stir my inspiration. Raksha Bandhan is recognised as the festival of love for the brother and the seeking of protection. While sibling affection is exalted and celebrated on this day, one cannot also underscore the value of relationships in general.

Be it between siblings or otherwise, the festival at a larger level, calls for one to vouchsafe for the well-being and support towards another. And quite often, it is neither the brother or the sister, but a third person that stands up for these values.

So Carnatic music gives us some divine gems in this order of things, mostly fro-m the Ramayana. Yaarendru Raghavanai in Yadukula-kambodhi, was one of the pieces I learnt in dance. As my guru would leave us in open-mouthed admiration for his grace and stupendous expressions, it also left me mulling over the lyrics. Is there a doubt as to who my Raghava is?

Thus exclaims the faithful brother Lakshmana in defence of Rama.  When Sita thinking her consort was in peril and urges Lakshmana to rush to his aid, the loyal younger sibling takes up his “case” and says even thinking of it would be belittling.

When Vibhishana became the outcast in the kingdom of his dicatatorial brother, he sought refuge with Rama much to the chagrin of his trusted vassals. But Rama counsels them all towards wisdom, saying — if I dont grant him asylum then who will? Sharanam Sharanam Enrane in powerful Sauras-htram.

Thus, a foster brother comes to the rescue, and the god to the help of the dem-on. Not just offering shelter and protection but restoring him back to glory with his kingdom as in the song Indha Vibhishana Lanka Puri Rajyam. This Raman-ataka Kriti of Arunachala Kavi in the golden voice of the late D.K. Jayaraman rings in my ears even today decades later.

Meragadu lechi rara, a sprightly javali, sees a confidante exhorting the hero to come to his beloved who remains wilting for him in clear terms. She may not be her biological sister but performs her role of messenger, caretaker, mentor and bosom friend to perfection. In the lilting Aliveni Endu Chaivu, the distressed dam-sel in the throes of viraha or separation, entreats her confidante. She cajoles her with endearing terms of adulation such as Aliveni, one of tresses like the dark bee, Manini, the respected one, Komalangi, the one with the charming form, to carry her message to her long-awaited Lord. How can one ever forget the mesmerising rendition of this by the late legend K.V. Narayanswamy? In my years of listening to music, no one else has been able to replicate the emotions and sensitivity of this song and the elusive beauty of the raga Kurunji, the way the late maestro did.

Many songs such as these portray this unwritten bond that is not always defined by blood. There are some exceptions though like in the padam Unnai Thoodu Anuppinen. This one sees the messenger engaging in a dalliance with the hero when she goes to carry the nayika’s message of love and returns back brazenly to her mistress.

Betrayals are part of relationships, but beyond the occasional Brutus, lies the immeasurable bond of trust, confidence, faith that manifest often outside of the immediate family relationships. Many Carnatic songs remind us of this of which I have listed a few personal favourites.

While much debate is now rocking the world of music over gods and songs, perhaps we can turn our attention to the message within music that soars across time.

Dr. Vasumathi Badrinathan is an eminent Carnatic vocalist based in Mumbai. She can be contacted on vasu@vasumathi.net