A tale of two buddies

Sikkandhar Dulkarnain’s film Ali, on his friend Abdul Gafoor, a differently-abled footballer, is sure to tug at the heartstrings. 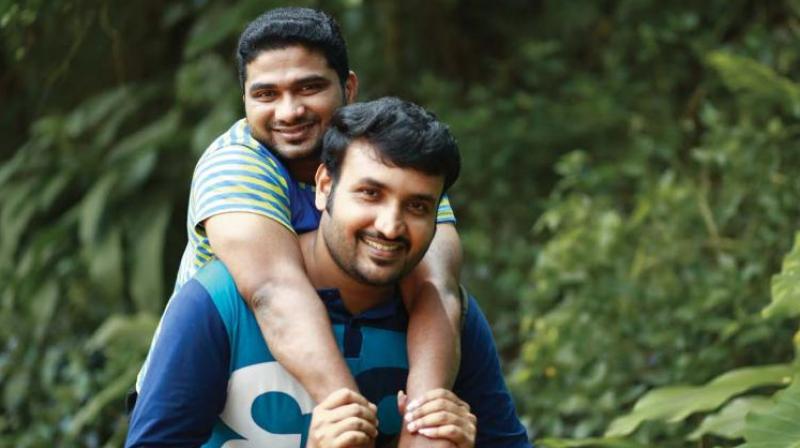 Dribbling across the ground, Abdul Gafoor strikes a goal and the whole gallery erupts with the loud cheer — “Maradonaaa….” A contagious smile brightens up his face as his co-players run toward him and stoop down for a tight group hug. The latter had done it famously once, but for Gafoor, it’s a daily affair for he plays, walks, swims and drives using his hands alone.

Gafoor’s lower limbs have been dysfunctional since he was two, but his family and friends have never  let him feel any challenge. Gafoor is glad about that.

“I have always been playing with my friends. Never have my parents tried to confine me to the four walls and never have I felt that I have a ‘defect’,” he stresses on the last word. Hardly two kilometres away from Gafoor’s place lived Sikkandhar Dulkarnain — both unknown to each other. Who’d have known the duo would become best friends in the future! Sikkandhar, a filmmaker, was sitting at a local tea shop when he chanced upon Gafoor’s story.

Recalling that day in 2007, Sikkandhar says, “I came across the story of Gafoor featured in a newspaper and I was taken aback. I have never seen a differently-abled youngster with so much positivity. Any other person I knew was either begging on the streets or waiting for someone’s assistance. Here was a guy who could do anything. I immediately went and met him.”

That was the start of a great bonding. The two soon became besties. Sikkandhar was chasing after his filmy dreams; he had very few supporters — his brother, uncle and a few friends.  He named the project Anwar-Ali, the story of two brothers, one of them Prithviraj and the other, a physically-challenged footballer. But it took some time for him to understand that making a film is not as easy as the dream. He shuttled between producers. For the commercial aspects, they asked him to make it a tear-jerker, highlighting the plights of Gafoor’s life. Sikkandhar couldn’t do that. “It had to be a film about an optimist and Gafoor’s is not a sob story. Finally, I decided to do it myself. With my short film experience, rented camera and crowd-funded production, I decided to make the movie, now named Ali.”

He approached Gafoor asking if he could act in the title role. Gafoor smiled, he could never say no. “I haven’t felt that I couldn’t do anything. The only time I was reminded of being a ‘cripple’ was while looking for a life partner. But Fathima came into my life and we are happily married; we now have a two-year-old daughter,” says Gafoor, who calls himself a content man.

“A handicap is not about one’s physical strength; it’s about your mind. If one decides that he can do anything, nothing will come in his way.” No, Gafoor hasn’t read Paulo Coelho.

Sikkandhar’s friends, villagers and theatre artistes in the locality helping with the making of Ali. To train his fresher cast and crew, Sikkandhar organised a six-month rehearsal camp by the end of which he started shooting and canned it in 36 days. “This is something I learned from Gafoor – if you have the confidence and will, you can cross any hurdle on your path,” Sikkandhar smiles, awaiting his dream moment – the release of Ali which is bound to happen in October.