The Chairman Cow decides whose answer is the funniest, and the winner becomes the next Chairman Cow and the round goes on. 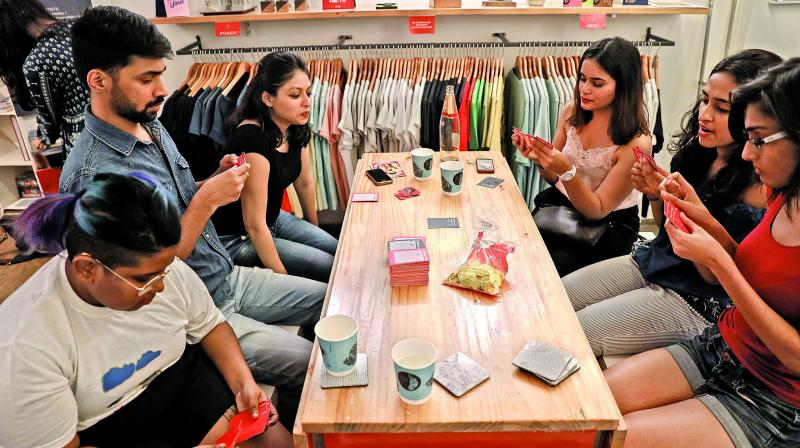 A group of youngster play the game during a playtest

Two city-based graphic designers have come up with a unique card game that encourages us to take a closer look at our ‘Indianness’ and obsession with ‘sanskaar’.

Although we live in an age where gaming apps reign supreme, there are still those who enjoy gaming the old-school way, via playing cards and board games. Adrita Das and Karan Dilip Wohra, the minds behind Cards vs. Sanskaar, a unique card game bubbling with humorous references drawn from the Indian experience, are fine examples of this passion. This crowd-funded card game, which saw the light of day this April, is modelled after the popular party game, Cards Against Humanity, which originated in Chicago. And just like the latter, Cards vs. Sanskaar too embraces topics that are otherwise considered to be risqué or taboo, thereby catalysing discussions around them.

But to appreciate the genius of this card game, you have to first understand how it is played.  A Cards vs. Sanskaar deck contains two kinds of cards – orange cards, which have funny responses on them, and black cards, which have prompts or questions. After a small competition that requires players to ‘moo’, the one who moos the longest becomes the ‘Chairman Cow’, who is tasked with reading a prompt from a black card. Each of the other players in the group is handed seven orange answer cards, and each player has to pick the funniest answer that best suits the prompt. The Chairman Cow decides whose answer is the funniest, and the winner becomes the next Chairman Cow and the round goes on. The goal of the game is not to eliminate players or accumulate high scores, but to rake up laughs, brush up your knowledge about current affairs, and reward the more ‘woke’ ones amongst us. 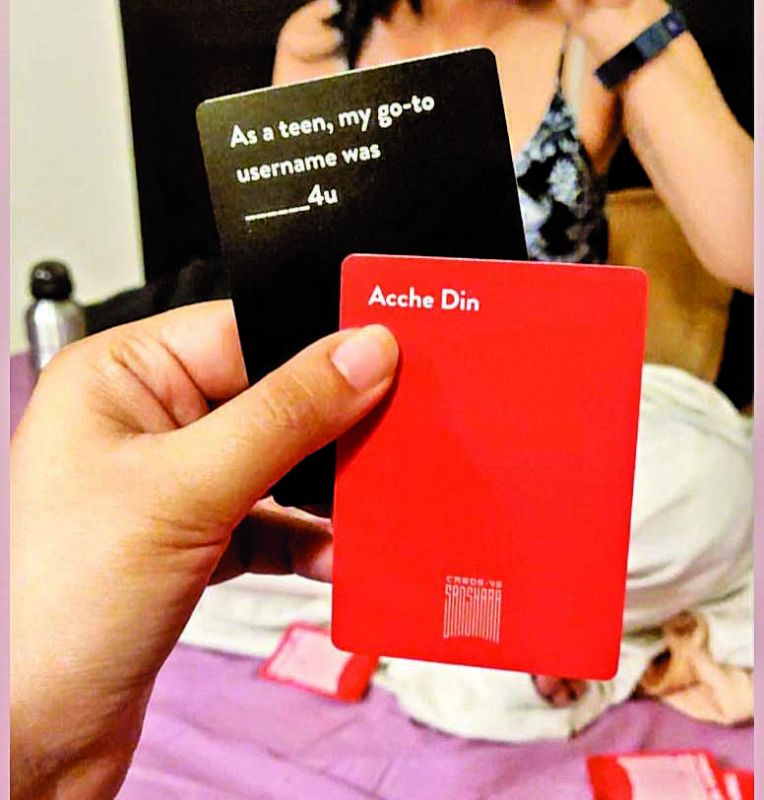 Combination created by a player

Here’s a taste of what you could find on the cards; a black card poses a fill-in-the-blank question — ‘Grooms wanted: Tall, fair and into (dash)’. The possible answers — ‘Palika bazaar dildos, Tantric fantasies, a cup of watery chai, the Kohinoor, unintended incest’; what would you pick? “The responses are inspired by situations, incidents, and experiences that transpire in India and are unique to the Indian experience. The cards touch upon elections, the political climate in India, our fixation with sanskaar, adult humour and things only Indians say and do,” says Adrita. But thinking up these various contexts and responses wasn’t a walk in the park. Adrita tells us how she and fellow inventor, Karan, decided to rope in content writer for Vice, Adhiraj Singh and conduct frequent playtests to increase both subjectivity and humour. Additionally, the creators went the extra mile to ensure that the cards do not denigrate any community, political party or religion. “While the cards do poke fun at a lot of things, we’ve made a conscious effort to not bring down or be biased towards any community or gender. There’s no right-wing or liberal bashing. The content merely inspires you to think about things,” avers Adrita. The 27-year-old also recalls how brands and well-wishers advised them to steer clear of political topics, but the duo decided to stick to their guns and this is what, she believes, sets Cards vs. Sanskaar apart from other games in the market.

But the makers didn’t start off knowing this was what they were going to do. In fact, it all started off as a prank, when the two inventors launched their design studio, ‘Smarter Than a Waffle’. To popularise the studio’s Instagram handle, the duo announced that they would be creating Cards Against Sanskaar and asked people to sign up for pre-orders. In return, the people who had signed up received a fake visa to Pakistan. “This started off as a joke because, at that time, there were a lot of discussions about sanskaar and who is “sanskaari”. We never expected the cards to garner so many requests, but that’s what happened and so, we decided to actually create Cards vs. Sanskaar. When we launched our crowdfunding campaign for the cards in December last year, we collected about five and a half lakhs in a span of two months,” shares Adrita. The response convinced her that there are people who were interested in playing with tangible games and that youngsters especially, were looking out for fun things to do with friends other than hitting bars or restaurants. “People like the human interaction that comes about while playing in a group. Also, for people today, receiving a neatly packaged box of cards is a novel experience,” opines Adrita, but adds that an app version of the game isn’t off limits for them.