Lori Lightfoot achieved the victory by assuring the voters of a city government cleanup and reduce economic inequality. 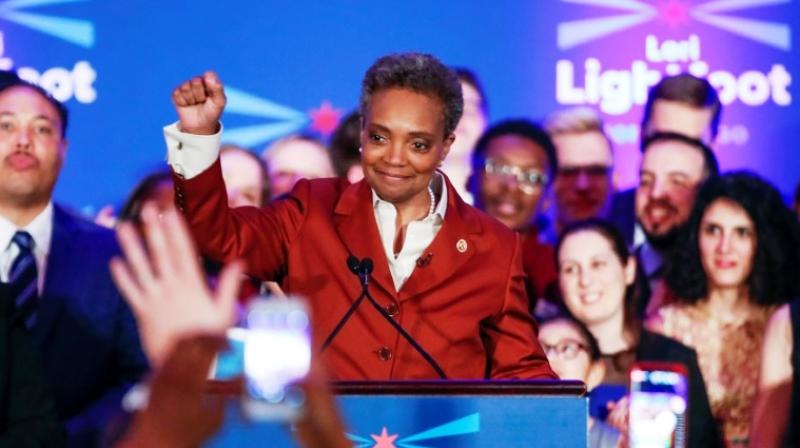 Chicago: On Tuesday Chicago became the biggest US city to elect a black woman its mayor, as voters put their faith in an openly-gay political novice to tackle difficult problems of economic inequality and gun violence.

Lori Lightfoot, a 56-year-old former federal prosecutor and practicing lawyer who has never before held elected office, won the Midwestern city's mayoral race in a lopsided victory. She beat out Toni Preckwinkle, a career politician who is also black, by a wide margin of 74 to 26 per cent with most ballots counted.

"We were up against powerful interests," Lightfoot said in a victory speech, with her wife and young daughter by her side. "Today, you did more than make history, you created a movement for change," she told a cheering crowd.

Lightfoot will become Chicago's first openly gay mayor as well as the first African America woman to hold the post. Since 1837, Chicago voters have elected only one black mayor and one female mayor. Her ascendancy to the top of Chicago government was a stunning development in a city where insider deals and entrenched party politics held sway for decades.

"It is a city-wide rejection of the Chicago political establishment at the mayoral level," Evan McKenzie, political science professor at the University of Illinois in Chicago, told AFP. Preckwinkle, the chief executive of Cook County in which Chicago is located, has for decades held various local elected offices, which analysts said hurt her in an election in which voters were looking to shake up city hall.

Among the top issues were high levels of gun violence that claims more lives than in other major American cities and years of political corruption in the Democratic stronghold. The initial field in the mayoral race consisted of 14 contenders, but Lightfoot managed an upset, sidelining moderates and establishment figures by promising to clean up city government and reduce economic inequality.

She and Preckwinkle were the final two left competing in Tuesday's run-off election. Voters left little doubt they wanted the next mayor to tackle the major issues vexing the city of 2.7 million people, including economic disparities and gun violence. "The message is that (voters) want new ideas and cleaner government," McKenzie said.

Community groups have for years complained about disparities in living conditions among the sprawling city's diverse communities. Gun violence, fuelled by gangs and the drug trade, plagues economically-depressed neighbourhoods in the South and West, which are majority African American.

The downtown business district and areas to the north and along the city's famed lake shore, have enjoyed an economic boom even as more than 550 people were murdered last year alone. Reforming the police department, which has a sordid history of abusive tactics and city hall, which is mired in a federal corruption probe of one of its members, were priorities for voters, McKenzie said.

Lightfoot headed a panel investigating the city's policing problems and held a number of appointed positions in city government. She has promised to increase affordable housing, fight homelessness and crime, and boost oversight of the police department. "We can and will finally put the interests of our people, all of our people, ahead of the interests of a powerful few," Lightfoot said Tuesday night.