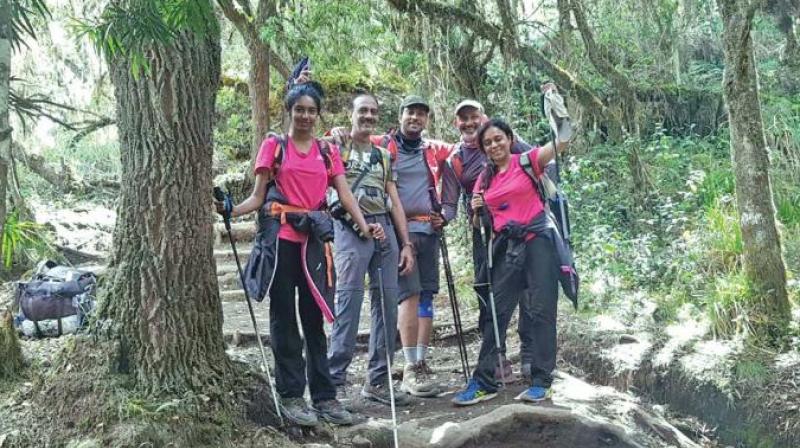 Anjali (left) with her family during the climb

Even mountaineering experts have often spoken about how gruelling a task it is to stay determined while climbing the rugged peaks. From braving extreme temperatures to nauseating altitudes, and gradually weakening bodies — there’s a lot more needed than just courage to reach the mountaintops.

Recently, 16-year-old Chennai girl, Anjali Nagaraj has shown her grit by conquering Mount Kilimanjaro, the highest mountain in Africa — and the tallest freestanding mountain in the world — joining the list of one of the youngest to have ascended it.

With her parents being huge trekking enthusiasts, it was only natural for Anjali to find herself attracted to being amidst nature and climbing mountains, she says. “While growing up, I always saw my father going on a number of treks and sharing his experiences from the journeys. My mother would also join him on some Himalayan treks and their stories from these trips about the kind of people they meet on the journeys, their experiences got me intrigued. When they told me about Mount Kilimanjaro, I was excited and I wanted to join them this time around and wanted to summit it,” the teenager shares.

A class 11 student at Abacus in Chennai, Anjali also took to several treks in the country before she got to the foot of the Tanzanian peak. “I used to go to Nagalapuram mountain range in Andhra Pradesh and also to the Chola forests to practice trekking before I could attempt Kilimanjaro. Still, trekking in forests and climbing mountains is an entire different game with the kind of altitude differences, and it requires a different gear too, but nevertheless, it all helped me gain experience,” the young mountaineer adds.

It took her and her family about seven days to get to the base camp (16,000 feet above sea level) of Mount Kilimanjaro and then an ardous overnight climb  to get to the peak, located at around 20,000 feet.

“We took the longest route as it was the easiest to get acclimatised to. It was not just the altitude, but an entire range of temperatures we had to get through — there were lush green forests, deserts, arctic zones and then a snow-filled mountaintop. While we were at the base camp, we had heard the news of a man dying and I kept thinking if the trek was worth my life and was a little worried. On the last day, I started having a pounding headache, and was feeling nauseous. But at such treks, one thrives on the will power of others around, as well!”

Anjali is now eyeing the Everest Base Camp, and says the experiences are all about pushing oneself to the extremes and learning from the nature.