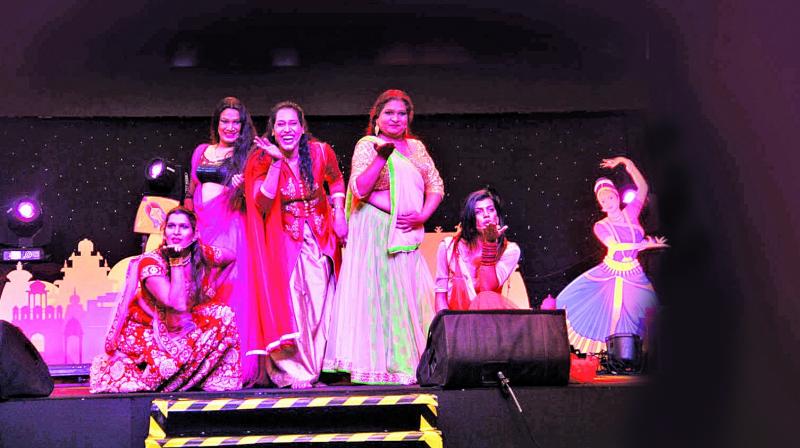 Meet India’s first transgender band — the 6 Pack Band, which is making waves with over 30 million views on YouTube.

They call themselves 6 Pack Band, but surprisingly it has nothing to do with fitness but all about music and gender sensitization. Meet India’s first transgender band — the 6 Pack Band, which is making waves with over 30 million views on YouTube. The music group comprises of Fida Khan, Ravina Jagtap, Asha Jagtap, Chandni Suvarnakar, Komal Jagtap, and Bhavika Patil, and their songs have featured celebrities like Hrithik Roshan, Sonu Nigam, Arjun Kapoor, Rahat Fateh Ali Khan, and Zanai Bhosle.

The band’s Aye Raju (music video featuring Hrithik Roshan) is a fun song with quirky lyrics, whereas, Hum Hain Happy is a rendition of Pharrell Williams’s Happy and the lyrics talk about the undying spirit of transgender community. Another popular song called Sab Rab De Bande is a soulful collaboration with Sonu Nigam and comes with a social message about equal treatment for all. The 6 Pack Band received international recognition with the only Indian performance at the Cannes festival in 2017 and won the Cannes Grand Prix Glass Lions Award and nine Emvies Awards. The promoter of the band, Shamir Tandon, who is also the curator and composer at JetSynthesys’ Music Boutique, speaks about the journey of the band so far.

When 6 Pack Band was started, the objective was to change the attitude of the people towards this community, which is misunderstood, ignored and neglected, mentions Tandon, adding, “We wanted to achieve equality through entertainment. It has been a life changing experience for the band, their journey from the streets to global recognition has been overwhelming. Today, we have reached over 30 million views on YouTube, winning the Cannes Grand Prix Glass Lion Award and even performing at the Cannes main stage, performing at the Mirchi Music Awards and still counting. Our band members have become celebrities today and every-time they perform, the love showered on them is immense. After the successful run of 6 Pack Band, we launched the 6 Pack Band 2.0 which focuses on a group and community that faces a social stigma - primarily driven by lack of awareness, understanding and therefore, acceptance - the theme of mental health and disability. The ‘Isspeshal’ 6-Pack Band showed the world that no disability can hold you back if given the right kind of love and support.”

Speaking about the origin of this unique band and bringing all the artists together under one roof, Tandon reveals, “Our team scouted the streets of India, went in local trains, slums and various places to talk to transgenders about this initiative. Most of the times we were not taken seriously or a few of my team members got a beating from them. It was hard for them to believe/take us seriously on the fact that we wanted to give them a voice, platform to showcase their talent, nurture them, show them a better life, make them a part of something so big as the majority of the society looks down on the community and is mistreated. It was a challenge to make them believe that we want to do good to their community. After months of search and auditions, we narrowed down the 6 members of the band. We are now invited to various platforms like literary festivals, women empowerment programs, and motivation and leadership forums to perform.”

The band was formed in 2016 and the journey is still on, says artist Fida Khan, who believes that the entire journey of 6 Pack Band so far is a dream come true. Fida says, “We are always referred in India as ‘Chakaas’ and we are a band of 6 members hence the name is coined as 6 Pack Band by Yashraj Films and Shamir Tandon. When the auditions were happening, we got to know about this through the industry middlemen and NGO’s. I was working with an NGO and our 1st round of auditions was taken with video clips of us singing. Out of 200 transgenders that auditioned, six of us were selected. We were then called to meet the team in a studio and the rest is history. All six of us are now great friends and our association and the bond is very strong. We often meet together and we also have a common WhatsApp group where we have a lot of fun. There is no specific genre we follow, our aim is to create, sing what comes from the heart. It has been a surreal experience for us.”

Enough has been said towards this community, which is misunderstood, disregarded and mistreated. After the Supreme Court decriminalised homosexuality last year, the band gained more impetus and took the centre stage to talk about how the economy is losing billions of dollars by stigmatising LBTQ community. Speaking about the success of the band, Fida reveals, “We are recognised everywhere we go, mobbed to take selfies, we have seen a change in perspective from our own families let alone the society. We are on the right path, as a society we are evolving and taking baby steps towards inclusivity. We have been fortunate to have this opportunity to spread the message of gender equality and try to diminish the stigma towards our community with the aid of HUL’s Brooke Bond Red Label tea, who came on board as a brand sponsor. At various performances or as motivational speakers at the conference we have seen our story inspiring every individual. The adulation and thunderous claps at each platform make us feel welcomed.”