Jeffery Archer reveals his favourite Indian author and tells why he has to leave his house everytime writes a book. 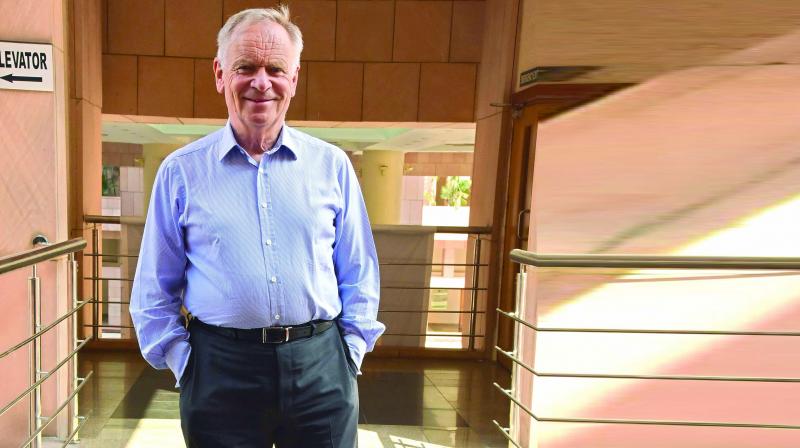 Jeffrey Archer, a best-seller author for the past 30 years and quite a heartthrob among the readers even at the age of 78, meets his Delhi-based fans on Monday at Sirifort Auditorium. His audience was comprised of a fan base ranging from young children to senior citizens and all were equally delighted to meet their all-time favourite author.

From the first moment of the interactive session, humour was the key element. He joked about India, his own publisher Jeremy (who was also present at the event) and didn’t even spare his wife Dame Mary Archer. He, staying away from all the modern technology and hand-writing all the drafts of his books, feels that the apple gadgets lying around in his house mock him and it is the reason why he has to leave his house every year and write his books in a complete serene place in Majorca.

While the author is favourite of a whole lot, it is obviously of interest to everyone to know his favourite author and when Jeffrey was asked this question, he called his first visit to India three decades ago. During an interview by an Indian journalist, he had asked who he should read and keeping her suggestion in mind, he read RK Narayan and was moved by the Indian writer. “I think he’s wonderful. I think Malgudi Days is the greatest book ever written. He has a genuine gift, he is both - a storyteller and a writer. Graham Greene has said publicly RK Narayan should have won the Nobel Prize. I agree. He is my favourite,” says Archer.

In his entire writing career, his biggest success has been Kane and Abel (1979). When asked about how the idea or the plot of a book with similar name to the Biblical book of Genesis came to his mind, the author says, “My first book Not a Penny More, Not a Penny Less was turned down by 16 publishers and the seventeenth published about 3000 copies and just about got rid of them in a year. Now before you people get depressed, 18 publishers turned down JK Rowling. So, don’t be dejected if the first, second, third or the fourth person turns you down, they are often wrong. It’s the public who make the decision. And, thankfully the public was with me. After the paperback was published, Not a Penny More, Not a Penny Less sold 25,000 copies in a month.” And, though the success of the book was not quite huge, it gave Jeffrey the inspiration that he was longing for all these months. He jokes about his success as well, “Even after being published for 22 million copies, I still have to call Jeremy every month to make him publish another 25,000 copies of my book.”

After the session, the author signed books and met each his fan with patience. He even encouraged the little ones who had an interest in writing books and also gave pretty good suggestions on what books they should read considering their age. The Clifton Chronicle author made the audience cheer, laugh, shared his professional as well as personal experience and the audience had no other choice but to feel that they were now a part of the author’s life and knew the best-selling author a lot better than before.