Looking ahead with pride

At the first pride parade after the decriminalisation of Section 377, members of the LGBTQIA+ community reveal what’s next on the agenda. 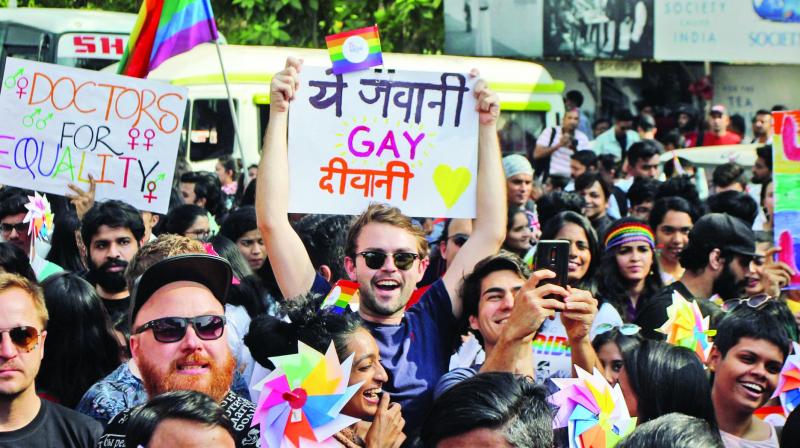 The colours were brighter, the costumes were bolder, the numbers were greater and the smiles were wider as thousands from the LGBTQIA+ community and its allies marched together at the recent annual Queer Azaadi March. This was the city’s first pride parade after a historic judgement decriminalized the draconian Section 377 of the Indian Penal Code and it witnessed the participation of over 15,000 jubilant people. However, along with celebrating the Supreme Court’s landmark judgement, the parade also functioned as a platform for the community members to discuss the agenda for ensuring equality, freedom and peace for the community. As Harish Iyer, the LGBTQIA+ activist says, “While we celebrate, we need to keep fighting, because we are not going to rest until we have equal rights for everybody.”

Apart from Harish, several other prominent rights activists also attended the parade, like Krishna Medikonda, one of the 20 petitioners from Pravritti, a LGBTQIA+ community group of IIT students, professors and alumni, who knocked on the doors of the SC in May last year to ask for the now obsolete section to be struck down. Also present was Anand Vasudevan, another signatory of the petition. He reminisces fondly, “It was just two weeks before the SC closes for summer, so we were not sure whether we will be able to get everything done on time. But, I was able to contact Menaka Guruswamy and she told us to get 10 petitions because there was no time, but we all rallied together like a team and were able to get 20 petitions. It was amazing!”

While the hallmark decision has legalized same sex relationships, same sex marriages are still illegal in India. For Sameer Samudra who was accompanied by his colleagues from Cummins India, his personal agenda for the pride march was to demand equal marriage rights, so that his marriage to his partner Amit Gokhale, who he wed in the United States, would be valid in India too. Gokhale, says, “The removal of Section 377 is just a step in the LGBT journey. Now, the real journey starts. We are equal citizens, but now we have to achieve real equality, which is having the right to marry whoever you like, having same hospitalisation rights, adoption rights, all of that.” Winnie Chopra who identifies as a lesbian is content with the court’s decision, but is also ready to fight for the legalisation of same sex marriages. As she says, “A lot of us want to get married, which is still not legal, so the fight is still going to be on, and it’s going to be a long way.”

The march that started from and ended at August Kranti Maidan saw hordes of students, parents, teachers, celebrities, and activists spread cheer throughout the old neighbourhoods of Grant Road. Among the queer activists present, Ankit Bhuptani from NGO Vidya, which focuses on bringing quality education to the marginalised, low-income sections of the society, finds an anti-discrimination bill to be the need of the hour.

“A queer individual can still be discriminated against at a place of education or work or any public place, just on the basis of their sexual orientation and gender identity. We see so many transgenders thrown out of educational institutions, not because of policies, but just by mere bullying,” he illuminates. He demands a legal framework in the form of an anti-discrimination bill to protect the minority community from the discrimination they continue to face.

Among the quirky slogans and placards, the ‘Anti-Transgender Bill’ ones were ubiquitous. In December, last year the controversial Transgender Persons (Protection of Rights) Bill, 2016, which sought to define transgender and prevent discrimination against the members, was passed by the Lok Sabha and is currently waiting to be passed by the Rajya Sabha. Although, the bill in its current form has been criticised by the transgender community for going against the NALSA verdict of 2014, not attributing the right of gender determination to individuals from the community, not providing reservation in education and employment and for not providing safeguards against violence from the biological families.  Christie, who identifies as an adivasi gender queer, explains that the law focuses on the majoritarian views of the family and ignores individual’s rights. She explains, “Even in the trafficking bill, a transgender individual is supposed to stay with their biological family, and if the biological family is unable to
take care of them, then they will be put into rehabilitation centres. You are not talking about counselling and intervention, but saying that this child is defected and should be put into rehab centres.” Nishtha Nishant, a transgender woman, who was expecting the law to provide relief to the community members, is shocked by the discriminatory clauses of the bill and wants the it to be re-drafted. “We are looking for the betterment of the community and want them (government) to consider the trans community and work with them at the ground level,” she elucidates.

As thousands waved rainbow flags on the streets, it’s clear that the resolve of the community is indomitable. As Suresh Ramdas, Mr. Gay 2019, envisioning about the future says, “The first step towards equality has started with the Section 377 going away, but now there is a lot more to fight for. So let’s not lose the momentum, energy and the force to go on and make sure to push for more agendas that we really need.”