India’s biggest cultural street festival that opened yesterday, has an eclectic line-up of arts, crafts and literature events, among others. 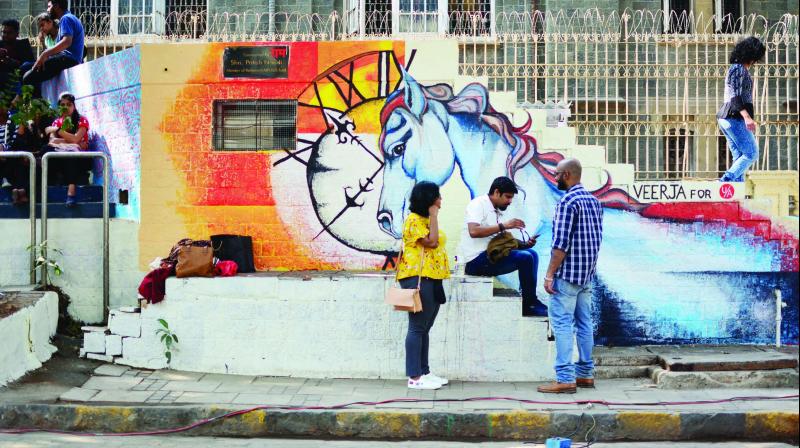 The Kala Ghoda and symbols of time are ubiquitous.

As you enter the familiar confines of the city’s most popular open-air exhibition, Kala Ghoda Arts Festival 2019 (KGAF) you are greeted with a life-sized Pegasus, frozen in his iconic rearing stance. But the Kala Ghoda twin of this mythical, winged stallion is markedly different because, for one, this Pegasus has seven heads, which a plaque tells us stands for the seven islands of Mumbai. His taut, rippling hide is covered with symbols associated with Gandhi’s principles and the colour of his skin changes from black to white as our gaze moves from hoof to head. This Se7en Headed Pegasus stands for ‘Kala’ Ghoda’s promise to embrace change and novelty as it completes 20 years and gallops into the future.

To underscore KGAF’s two-decade run, the theme for this year is A Measure of Time – a theme that invites visitors to take a retrospective peek at the festival’s existence. Along with celebrating its 20-year long run, the art festival also tips its hat to Mahatma Gandhi, whose 150th birth anniversary coincided with the festival’s opening day. “We started in 1919, so this is the 20th year and we are very excited about it. So it’s a bit of a retrospective. We are also celebrating 150 years of Gandhi and so we will have talks, book readings, film screenings and exhibits dedicated to him,” says Nicole Mody, festival director of KGAF 2019. “We also have a very cool visual arts exhibition on the 20 years of Kala Ghoda at the Jehangir Art Gallery. One of the installations here is a map of the festival, where festival brochures from 1919 onwards are on display. The maps in these brochures show how the festival has grown, from the number of venues to the size and scope,” she adds.

Each of the exhibits at the other venues too embodies the festival’s theme. The Kala Ghoda and symbols of time are ubiquitous. Several larger-than-life installations of the iconic horse are fitted with coloured glass panels, the idea being to capture the vivacity of the city and the multiplicity of perspectives. One sees several markers of time too, like hourglasses, both miniscule and mammoth, a giant naval bell, wheels and clocks. Another recurring motif is colourful yarn, which symbolizes both unity and diversity. The exhibitions also pay tribute to institutions in the city that have supported the festival, like Jehangir Art Gallery, Watson’s Hotel, NGMA and several others.

Interactive exhibits encourage visitors to leave behind a thought or take and make their mark on the exhibition. As always, the exhibition is lined with a stream of stalls, each selling wares that capture curiosity and imagination. Another staple is the variety of concerts, workshops and activities lined up at venues all over South Mumbai, right up to the 10th of February.

Though a KGAF regular might feel that the installations this year are slightly repetitive and lack the grandeur and scale the festival is known to showcase, the hemming in of creativity could perhaps be because of the nostalgic nature of the theme. But even if the installations fail to evoke jaw-drops and gasps, the exhibition is still worth a visit, even if just to be jostled around by enthusiastic, camera-toting visitors who invariably rub off some their enthusiasm on to you.