Rafique Baghdadi is a veteran film journalist, lifelong walker of Bombay streets, and authority on Manto. 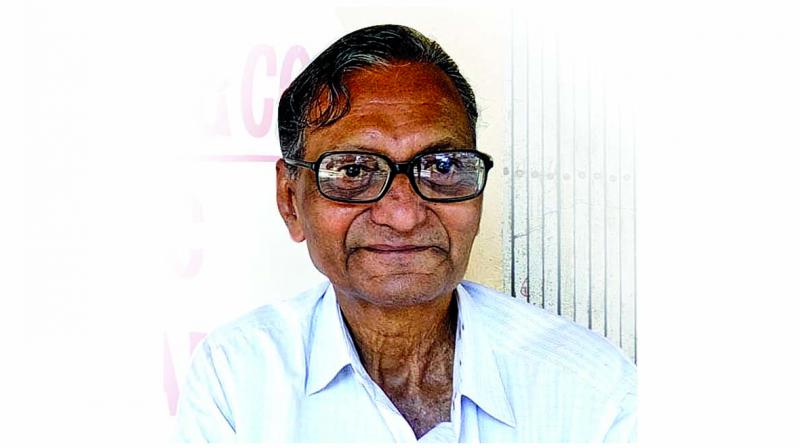 Rafique Baghdadi is a veteran film journalist, lifelong walker of Bombay streets, and authority on Manto. The septuagenarian has lived in Mazagaon’s Khan Building all his life in a room filled with towering stacks of old and rare books and magazines that are still inching toward the ceiling. An excellent raconteur, he is a treasure trove of Bombay history and passionate about connecting the present to past but pragmatic about the inevitability of change and how heritage succumbs to modernisation. Mr. Baghdadi talks to Mrigank Warrier about the history of Mazagaon and Bollywood in the ’70s.

Early Life
I went to Rosary School nearby, then Xavier’s Technical College, then Siddharth College to do my BA (Hons), then spent some time in Government Law College but was a dropout there (chuckles). I went on changing my field. I started as an electrician, then did radio engineering, then law. I ran a bookshop called Jaico opposite Bombay University in the ’70s for a long time.

Call of the Siren
Bombay has layers of immigration. The people who came earlier stayed in one area only. They belonged to one native place and they worked together. If you look at Mazagaon, Scindia [Shipping] was there, Bombay Port Trust was there. At 7 o’clock – the siren – people went to work; 7.30 – the other company’s siren, at 4.30, it rang and people came home. The community stayed together in one place because koi mar gayaa toh mayyat pe log aayenge, shaadiyaan hongi, they had that sort of link. Now, people are staying so far apart, even if you call for a wedding, it is very difficult [for them to come].
You’re so busy in Bombay that you don’t miss anything. You miss it only when you are sick or lonely.

A Different Mazagaon
Because I have lived in this area, I can record the change that has happened here. When I was growing up, [Khan] building, which has a Muslim name, was completely Catholic: Mangalorean, East Indian, Goan. We were very influenced by Catholic society: dancing, eating, drinking, football, hockey. English also we spoke like them, Hindi also we spoke like them.
Once upon a time, I used to spend a lot of time standing downstairs, looking at people passing by. This area was 27 per cent Catholic and very cosmopolitan; now that has changed. It was a nice feeling, watching people coming, going, on Sunday, after Mass. The Christian community was very fun-loving. They had christenings, home-warmings, playing darts, some programme [or the other]. That sort of thing is not happening. I don’t spend much time here now.
A lot of people used to stay in Mazagaon: the boys working on the ships [they used to drink a lot], the girls as secretaries or typists or teachers. Their children grew up, they didn’t want to stay in one room, they shifted to IC colony in Borivali and Malad.
When I was growing up, in this whole area, there was one telephone [not in my house]. Everything was through telegraph. In the night if the telegraph guy came, you felt somebody had died. You have to understand the process of change. You have seen change in your lifetime. I have seen it in mine.
The whole geography of an area changes. Earlier, there was only one restaurant here: Pine, which was on the main road, run by Iranis. Used to make very good kebabs, mutton stew and cutlets. Everybody used to come from far away from 5 o’clock to buy. Now it sells Chinese food. Now no one comes. Food habits have changed, the new crowd has come. Once upon time, oyster was a poor man’s food. Nobody ate oysters. Now, it’s the most expensive thing.

Life In Cinema
My father was working for Bombay Talkies. I have a lot of memories of watching cinemas as a kid and made the best of friends because of cinema. I started meeting cinema people because I started writing about them. I could be with a director or writer, particularly of the New Wave, but not actors!
I am very interested in the history of cinema. When I look at it from the beginning to 1970-75, I think there are few people in Bombay today who might recognise those actors. After some time, no one will know who Ashok Kumar or Dilip Kumar is also.
I started writing about films in the ’70s. I would do a lot of research on one particular film. Conduct interviews with writers, directors and nostalgic older actors. I found them all very interesting people. They were very well read, they could articulate very well, some of them like Gulzar are very charming, you meet him and you always remember “I met Gulzar”.

The Navketans [actor Dev Anand’s production company] were the first people who started shooting Bombay, then Chalti Ka Naam Gaadi, so many others came. Now, the problem in cinema is that the icons of Bombay are not there anymore. Earlier, they showed VT station, Rajabai Tower, so you knew you were in Bombay. Now, [the characters] could be staying anywhere, even New Zealand!
The earlier books about Bombay or Mumbai or whatever you call it, were mostly diaries. From 1980 onwards, there were a lot of good books. The greatest contributions were by Gillian Tindall (City of Gold), Rahul (Mehrotra, architect) and Sharda (Dwivedi, historian) – their contribution is fantastic. Gyan Prakash has written a very good book – Mumbai Fables.

Any advice for us?
What advice can I give you? Walk and read! As simple as that. The more you read, the more you know. Millions of people cross VT station but they don’t look at it, they have no time to stand and stare. We have to create a sense of history.

— By arrangement with the citystory.com