Mother beats one in 5,00,00 odds, gives birth to twins thrice

A mum has beaten one in 500,000 odds after giving birth to twins - three separate times. 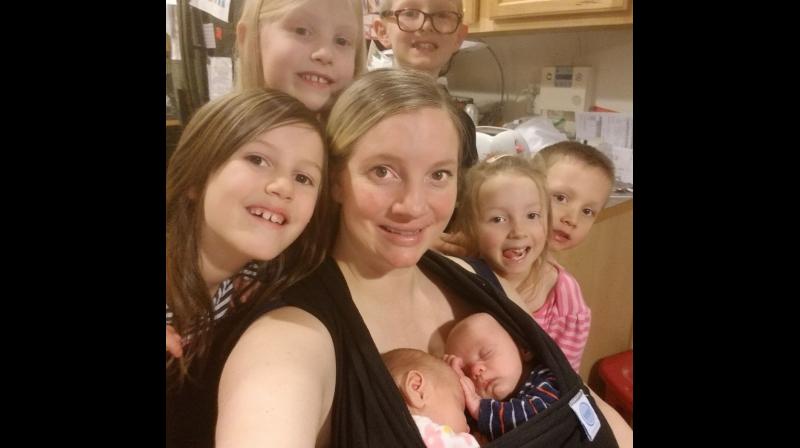 Misty Lang, 35, a twin herself, grew up in foster care and is not aware whether twins run in her family. (Facebook/ Misty Lang)

Growing up, Misty Lang, 35, imagined herself being a mother to one or two children - but instead, she has ended up with seven little ones, after hearing the words “It’s twins!” three different times.

Misty Lang, 35, a twin herself, grew up in foster care and is not aware whether twins run in her family.

But judging by the three sets of twins she’s given birth to, it seems likely.

Lang’s first set of twins, Alex and Lexie, are both nine, then she gave birth to a “singleton,” Calista, seven, then twins Lacie and Nash, who are five, and just recently Lang gave birth to Lana and Phoenix, who are just ten weeks old.

And it doesn’t appear Misty’s partners have had any influence on the likelihood of twins.

Misty’s first twin babies were born while she was still with her ex, and the second and third set of twins are her husband Peter Lang’s.

According to Misty, “Peter is an only child, so was very eager to have children.”

Finding out she was pregnant a week before their wedding in March 2010, Misty recognised the same extreme fatigue she had felt while pregnant with her previous twins - and suspected it was twins again.

Seven years later, Misty became pregnant with twins again - this time while juggling life as a working mum in school.

And although the pregnancy was planned, the twins were a surprise.

According to Misty, “basically every time I’ve tried to get pregnant it has resulted in twins!”

However, Misty was able to finish school, despite being pregnant - but has had to postpone medical school for the time being.