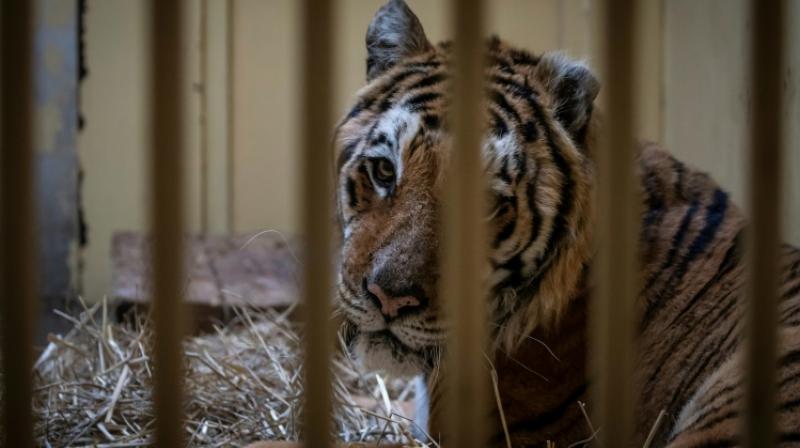 In late October, Polish border authorities found 10 emaciated and dehydrated big cats in the back of a truck taking them from Italy to a zoo in Russia. (Photo: AFP)

Five of nine tigers that narrowly survived a gruelling journey across Europe set off on Saturday for their new home at a Spanish animal refuge after weeks of recovery at a Polish zoo.

"The tigers have left. We're very happy that in just 24 to 30 hours they will arrive," said Malgorzata Chodyla, spokeswoman for the zoo in Poznan, western Poland.

Their destination is the Primadomus Wildlife Refuge in the southeastern Spanish town of Villena. Chodyla said there was a brief scare, as two of the tigers did not want to sleep, despite the sedatives they were given.

"When the whole team has to enter the enclosure to carry out the tiger and it suddenly lifts its head up, those are some tense moments. But everything happened safely," she told AFP. She added that the vehicle had heating and the tigers had enough room to switch positions.

In late October, Polish border authorities found 10 emaciated and dehydrated big cats in the back of a truck taking them from Italy to a zoo in Russia's Dagestan Republic.

Polish prosecutors charged two Italian truck drivers and a Russian man believed to have organised the journey with animal abuse after the truck got stuck for days on Poland's border with Belarus.

Prosecutors also charged a Polish border service veterinarian for failing to properly examine the tigers when they first arrived at the Koroszczyn crossing, where one of them died. The surviving nine tigers were taken to two Polish zoos.

The Poznan zoo described them as "emaciated, dehydrated, with sunken eyes, excrement stuck to their fur, urine burns, in a total state of stress, without the will or desire to live" when they were first discovered.

According to animal rights organisations, there are only between 3,200 and 3,900 tigers in the wild worldwide. Another 7,000 are held in captivity, mainly in Asia.