Life   More Features  02 Dec 2019  Iranians are a proud people and won’t be cowed down by threats
Life, More Features

Trump’s hopes that Iranians will rise against the government because of economic hardships are misplaced. 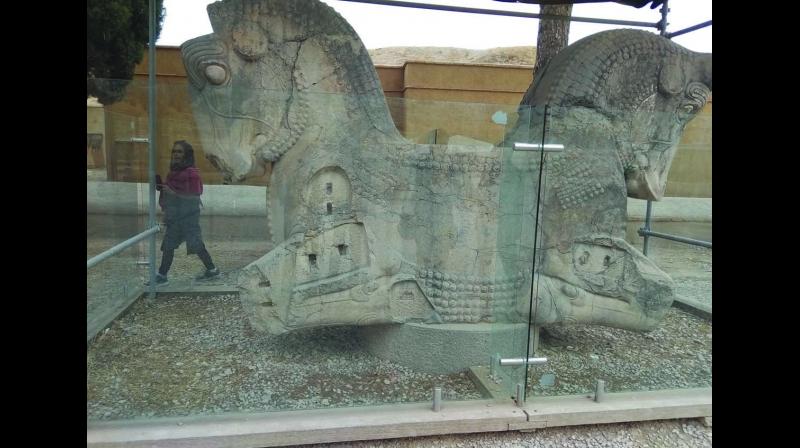 Unlike its Arab neighbours, Iran has a pool of scientific talent, and women research assistants are aplenty.

Iran was a surprise. Should not have been, as everyone is familiar with the richness of Persian civilisation, the ruins of Persepolis (the city was set aflame by Alexander the Great after plundering the capital), its renowned poets Hafeez, Rumi, Omar Khayyam and Sadi. The mosque in Maashad is a must visit for Shias around the world.

The Iranian Revolution of 1979 pushed back much of the romantic aura about Iran. Front page pictures of Revolutionary Guards and supporters of the Islamic Revolution shouting death to America was a common sight. Though Indians did not share this perception of Iran, the powerful Western narrative influenced India’s mindspace. So there were usual questions such as: Is Iran safe? Can women drive? Are women in hijabs? The nuclear stand off between Iran and the US naturally dominated the news for decades. The fact that India was forced by the US, like other buyers, to stop lifting oil from Iran was a major point of discussion here.

Iran has been under sanctions for the last 40 years. The latest series of crippling sanctions kicked in this May. So when we, a group of journalists from the Indian Women’s Press Corps, landed in Tehran’s Imam Khomeini International airport on a balmy morning, expectations were of an austere country bogged down by economic woes and concerns of a possible attack by the US or its allies in the not too distant future.

What we saw was very different. It was a voyage of discovery. For one, Iran did not give the impression of a nation under siege. The people look happy. Young couples in love hold hands in the many gardens and parks that dot the urban landscape. Streets are tree-lined, wide and smooth. The country is clean. Isfahan more so. Music and poetry is very much a part of life. Yes, they are facing hardships, but shops are crowded though inflation has skyrocketed to nearly 40 per cent. The shop shelves are filled, food stocks plentiful, restaurants crammed and roadside eateries do brisk business. Import substitution is common. With Coke and Fanta no longer available, the local fizz drinks are  Zam Zam cola and Zam Zam Fanta. A favourite is a mint flavoured yogurt drink.

Women are beautiful, the older generation are in black hijabs, but not the young, though everybody wears a scarf. Hair is covered. Make up and false eyelashes are everywhere. And young women go in for a nose job. It is common in Tehran, Shiraz and Isfahan. Why the obsession for a perfect nose is not clear.

But yes, sanctions are hurting. The protests over the rise in oil prices happened soon after we returned. The government’s aim is to raise oil prices to make money available to the poorest sections that need help the most. That possibly misfired.

While President Rouhani has tried to hike up salaries for government employees, up 25-30 per cent two years ago, its clearly not enough. Most people are finding it hard to make ends meet. Many are taking two jobs, especially those in private jobs. But no one is pointing a finger at the government. “We are not against the government. It is not Iran’s fault. We did not break any rules, it is President Donald Trump who did so. He walked out of the nuclear deal negotiated under Obama,” Abdollah, a carpet merchant in Vakil Mosque at Shiraz said. He admitted that his business has been hit. “The US can do its best, but we are resilient. We can stomach this. I am not the only one who is facing problems everybody is, so its okay,” he added quite cheerfully.

“Prices have gone up by nearly 300 per cent. Buying a home is becoming almost impossible,” said Darius, who gave only his first name. “I wanted to have a home before getting married, but wait for that… I will miss both a wife and a house,” he added with a twinkle in his eye.

A common refrain is that sanctions have made Iran stronger. Foreign minister Javad Zarif said so, as did the head of a transplant unit we visited in the Fars province. Dr Sayed Ali Malik Hosseini runs a charity hospital called the Abu Ali Sina Hospital. He is known as the father of transplants in Iran. His institute performs 500 liver transplants a year. The first liver transplant performed in Iran was in June 1992 by Hosseini. Besides liver, pancrea, kidney as well as heart transplants are done at the centre. Patients come not just from every province in Iran, but from neighbouring countries as well. The hospital according to Hosseini is among the top ten in the world for organ transplants. Hosseini felt that “medicines should never be affected by sanctions… It is inhuman and a violation of human rights”.

But the doctor admitted that while over 70 per cent of medicines are manufactured and sourced locally, there are problems with high-end medicines. The institute substitutes, but sometimes these don’t work as well as the original.

“For renal replacement surgery, we would import fluids from Germany. That has now stopped. We are using filters with a little less efficiency,” Dr Reza Nikandish of the hospital’s intensive care unit said. “The sanctions have given us the opportunity to use our own resources better”.

Unlike its Arab neighbours, Iran has a pool of scientific talent, and women research assistants are aplenty. At the Royan Institute for Biotechnology in Isfahan, where a sheep was cloned in 2017, and stem cell research is on, women are all around poring into their microscopes. Over 60 per cent of students in the universities are women — except in engineering, girls outnumber boys in most other streams.

How has Iran managed to survive the severe sanctions so far? Much of it is because it is self sufficient in most things. Also, despite the sanctions, Iran continues to work around them. “The world wants Iranian oil,” said foreign minister Javad Zarif. Only difference is some people make a massive profit. They buy cheap and sell dear. Iran borders seven countries and open orders help trade. Donald Trump’s hopes that Iranians will rise against the government because of economic hardships are misplaced. Iranians may or may not like their government but will they are a proud people and will not be cowed down by threats.