We need to focus on education: Shabana Azmi

In the city for an award ceremony, Shabana Azmi speaks about what women’s empowerment means to her. 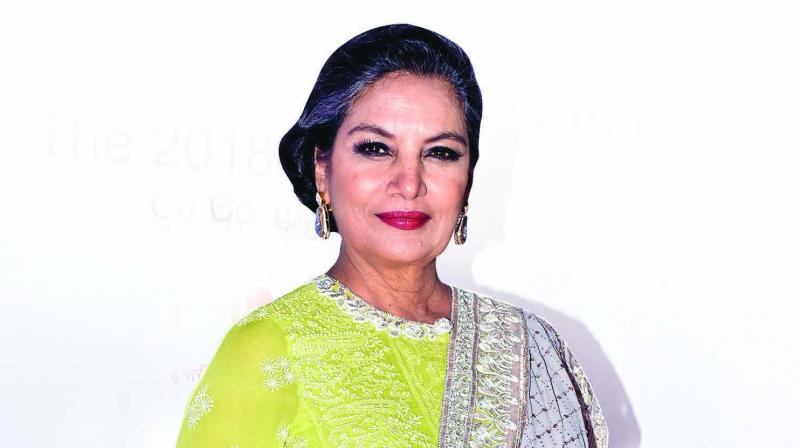 Actress Shabana Azmi has taken her journey from the reel to real and has been volunteering and championing many causes, including that of women empowerment for the past few years. In the city for a conclave, Shabana was speaking at “Asmita” — a conclave to recognise, realise and celebrate the power of women leadership, organised by Foundation for Management Research and Training (FMRT).

Talking about women’s empowerment and women’s leadership, Shabana says, “We have a central point of negotiation. It is now accepted that the GDP of a country is not the true yardstick of a nation. The true yardstick of a nation and success is its HDI — the human development index. It is in this that the access to health, access to education, and access to basic facilities are taken into consideration  and the most important of them is women’s empowerment.”

Speaking about her father, Kaifi Azmi, she says, “I take pride in the fact that 70 years ago when it was believed that women should stay at home while the man goes out and struggles for the family, my father was championing the rights for women through his words.”

She adds, “When we talk about women and leadership, it is important to know the various ways that this can be achieved. Education is one, of course there is financial independence. These things lead to women participating in the decision-making process at home. There is no disputing that women must be educated as any individual needs to be educated, but what kind of education is that? We don’t give enough attention to that.”

Shabana also works in a village called Mijwan in Azamgarh, Uttar Pradesh. “It is the village where my father was born. I have seen the transformation that is taking place in that village. Girls used to come to class with sindoor on their forehead because they were married off by the time they were twelve. It was something both my father and I worked against. We had tried to explain it to them several times that it is illegal and their parents could be imprisoned. It didn’t make any difference. But because of the kind of information that they are getting in college, they along with their vice principal wrote a play against dowry and travelled to Jaipur for an inter-state competition. They got the first prize. A 15-year-old said, ‘This is not just an award, it’s my passport to freedom. On the basis of this. I will negotiate more space for myself.’ She made everybody take a vow that if there is pressure on any girl to get married before the age of 18, they would all go and do a dharna outside their homes.”

Shabana shares that the village has now transformed and in and around 40 villages near Mijwan not a single girl gets married before the age of 18. “How does this come about? It comes about with a mindset change. As a nation, we are deeply embedded in a patriarchal structure, in which it is automatically assumed that a boy is privileged. We need to change that.”

But she stresses the role that women have to play as well. “We have to be cognizant of the fact that women who are considered leaders, who are in positions of power, take other women along with them. Men network a lot. We need to get women to network with each other. You as a woman have to create that space for other women to follow.”

Hoping for a future and workplaces that are more facilitating for women, she concluded, “It’s important that we start today.”