By 2020, the French capital will host more than 100 hectares of rooftop gardens and planted walls. 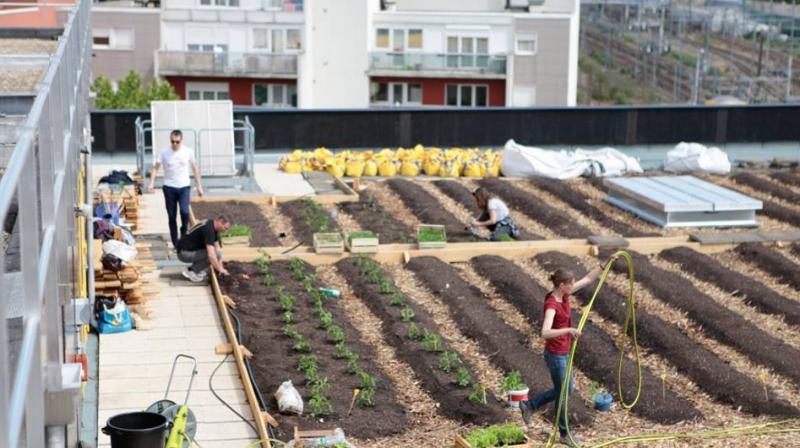 By 2020, the French capital will host more than 100 hectares of rooftop gardens and planted walls. (Photo: Facebook/Facteur Graine)

An urban agriculture initiative to make Paris more environmentally sustainable, mainly through farming on the capital’s rooftops, has been such a success that the mayor is unveiling a new round of projects this week.

Rooftop farming has boomed in the past years from New York to Tokyo via London and Paris.

By 2020, the French capital will host more than 100 hectares (0.39 square mile) of rooftop gardens and planted walls, the Paris City Hall said. Of this, one third will be devoted to urban farming.

The first wave of projects will lead to the cultivation on 32 sites of 425 tonnes of fruits and vegetables, 24 tonnes of mushrooms, 30,000 flowers, the production of 8,000 litres of beer and 95 kilograms of honey.

These include a 900 square metre rooftop farming project on top of a French Post Office building housing around 500 employees in northern Paris.

Surrounded by high towers, postal workers grow fruit and vegetables including lettuces, aubergines and tomatoes, and breed chickens on 90 tonnes of earth deposited on the roof.

“We are postal workers who thought it was nice to be able to fulfil our dream, which is to work for a more edible city,” said Sophie Jankowski, head of Facteur Graine (Seed Postman), which manages the Post Office’s rooftop garden, told Reuters TV.

One of the association’s commitments is to use old vegetable varieties, such as high quality tomatoes which do not travel well over long distances, she said.

“We want to give taste to life but also to plates.”

The project also changed the way employees see their workplace.

“It helps us connect with nature. We’re in front of computers, we live in a virtual world, so doing those little things help people reconnect with each other, with the living,” Corinne Lienhart, communications officer and volunteer, said.