In 2009, his official introduction to trainer and mentor Akbar Ebrahim (present president of FMSCI) got him into racing professionally. 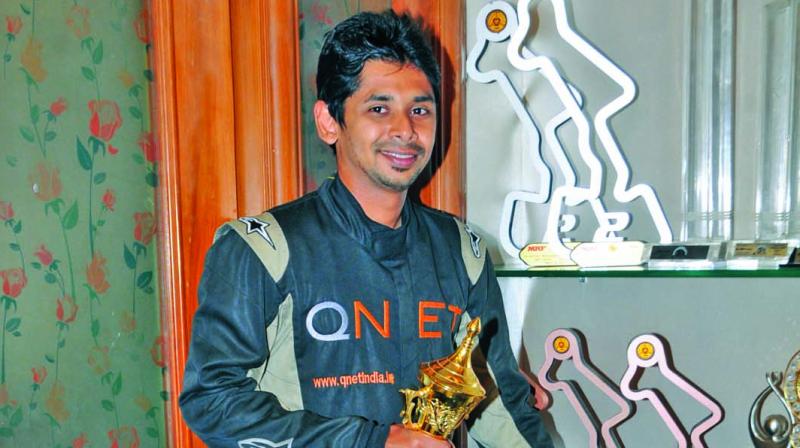 Champion racer Chetan Korada has proved that an amputation can be a hurdle but it cannot stop one’s willpower.

The 31-year old passionate racing driver had to overcome bone deformity in his legs as the bones below the knees were not formed in the right way when he was born. He made adaptation his weapon. He did not wish to spend the rest of his life in a wheelchair talking about other people’s success stories and took up the challenge by using synthetic limbs.

Like other kids, Chetan started walking with severe pain and bleeding. Being a sports lover, he liked athletics, basketball, and  tennis. His main source of inspiration was his mother Padma, who supported Chetan since he was a toddler. She was passionate about driving cars and noticed her son’s inclination towards toy cars.

She taught him to drive and nursed his racing ambitions too. Being a car racer was something beyond expectation for him. “My prosthetics were part of me, and when I sat in the racing car, I was a perfect fit,” Chetan shared cheerfully.

While talking about the high expenses that go into starting a career as a racer in go-karting, he said, “Initially I paid my way through motor sports. When I started, it was around Rs 1.5 lakh, but today it has gone up to around Rs 5 lakhs at least. However, I was lucky to get sponsors throughout my racing career.”

Since the age of 20, he began to focus on racing as his career option although he pursued audio engineering in college. Eventually, Chetan came in touch with the Madras Motor Sports Club and its race track. He debuted in national level racing in round 2 of JK Tyre national racing championship.

In 2009, his official introduction to trainer and mentor Akbar Ebrahim (present president of FMSCI) got him into racing professionally. Ebrahim  introduced him to the Formula BMW-series.  In 2009, he won five races and grabbed the second place in one of the six races during the MMSC Summer Cup Champion 2009 (Class-FISSME).

“The year 2011 was a memorable one.  It gave me a complete boost”, shared the racer as he finished in first place in Round 4 in the JK Tyre FMSCI national racing championship (Class-Formula LGB Swift 1300cc). Starting 12th in the grid of 23 competitors, he finished first. He also finished as the runner-up in the Senior category of the Kart 1 Racing series the same year and started dreaming big. In 2015, he got into Formula MRF 1600, adapting to its demands and in 2017 he finished as a runner-up in Formula MRF 1600 FMSCI National Racing Championship.

While the Italian ‘Formula One’ (F1) driver Alex Zanardi has proven his skill, Chetan was the only Asian and the second car racer in the world with prosthetic legs . However, Chetan is still the world’s only car racer who drives a regular racing car without any custom-made modifications, as he doesn’t like to depend on technology too much. Chetan is also going to make his debut in the international racing circuits in 2018 with support from QNet, starting with Formula Masters Testing Programme at Malaysia. He is also eying the MRF International Challenge to be held from November. The challenge will be held in Abu Dhabi, Dubai, Bahrain and the finals will take place in India (Chennai).