A cup of change 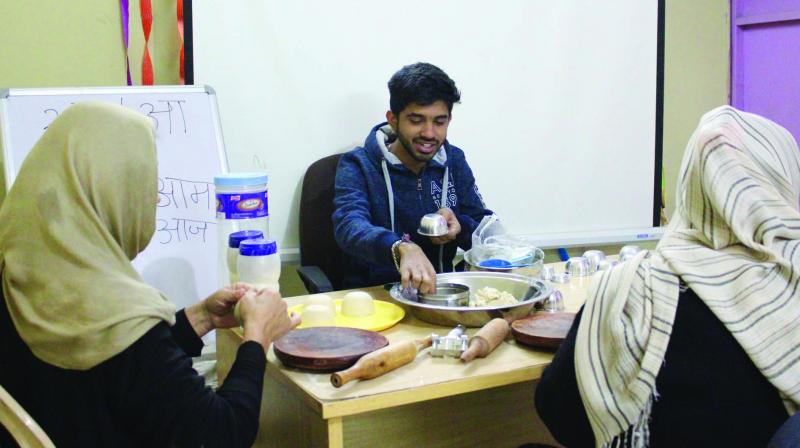 Having lost her husband recently, Najia (name changed) was struggling to cope with her daily life in Afghanistan. Since she belonged to a well-to-do family, she started getting extortion threats from Taliban. For days, Najia did not step out of her house, living off whatever food was in the house, till one night she escaped with her children to Delhi.

From being rich to struggling for survival, Najia saw her life turn upside down. While women in Afghanistan do not work, Najia had no choice now but to take up work to survive. But having no knowledge of Hindi or English, getting work too seemed next to impossible till students from Kirori Mal College got in touch with her. Running ‘Project Patradya’ along with NPO Enactus, the students have brought several such women together and helped them earn a living.

Besides helping women from the Afghan community, they are also solving a big environmental issue. “At our centre we make edible cutlery and utensils. They sell well as we tie up with catering businesses. There is a growing need for environment-friendly disposable utensils and what better way to tie up two noble causes. We also provide free basic Hindi lessons at the centre, so that these women can at least buy basic things and travel hassle-free here,” shares Shivam Shukla, a student from Kirori Mal college.

Home to over 2,00,000 refugees, this centre has not only come as a financial boon to war-affected Afghan women but has also helped them step out of their houses. “Initially, we only had those women in our centre who had lost their husbands and had no other source of income. But recently, two women who live with their husbands have joined us. They decided to come here so that they could contribute to their family income. It is a slow change within their community as well,” explains Shivam.

The inspiration for the project struck the Patradya team when they saw a lot of used disposable cutlery cluttering several sites in Delhi University’s north campus. “The amount of garbage generated merely because of plastic cutlery can damage the environment. Our cutlery, cups and bowls are made using rice, wheat and jowar flour and are safe to consume for 20 days,” says Shivam.

The cutlery has a mild salty taste so that it doesn’t overpower the taste of the dish one is enjoying. The team eventually plans to add other flavours and diversify their products in order to reach a wider customer base. “We eventually plan to sell these to several street-food vendors and set a positive trend,” he adds.

Once the project grows and becomes independent, it will be handed over to the women working at the centre, to be run independently.