Talking about when she felt the high in her career, she recalls she enjoys most hosting a big scale concert. 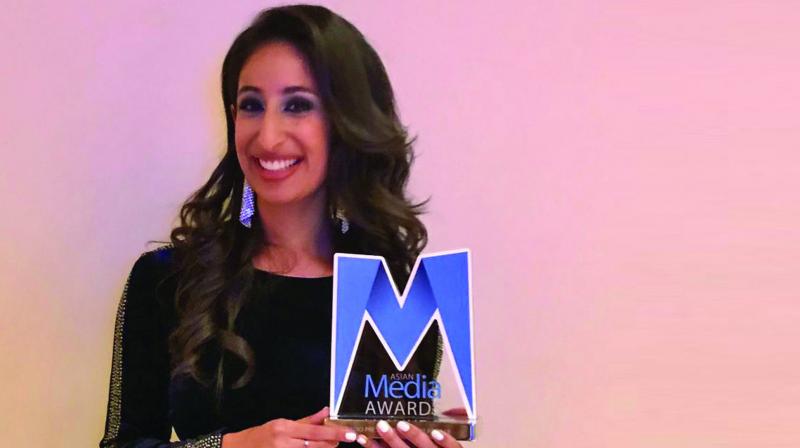 Anushka Arora, An Indo-British actor, radio presenter, producer & anchor, says a well SPENT MOMENT with family in front of the television and doing nothing is a perfect day.

Anushka Arora is one talented and versatile lady. She has many accolades under her belt and is obviously motivated to do much more. Anushka has proven her mettle and is a winner. After receiving a number of awards she seems to be going up the ladder of success at great speed. She is so much in love with Indian music and art which got her an opportunity to host and be an integral part of international tours with many artists from Lata Mangeshkar, Mika Singh, Shah Rukh Khan to Ranveer Singh and Alia Bhatt’s Gully Boy Premier.

Born and brought up in England but belongs to India – she has done and achieved magnificent things to make her nation proud with her skills and extraordinary work, globally. She was awarded the “Pride of India Award” for being an NRI Most Prestigious Journalist from the NRI Institute at the House of Lords, London paving her ever glorious work in the field of electronic and new media.

Upon being asked how she felt after ‘almost’ reaching the zenith of her career as she has an even brighter future ahead, she replied, “I would like to believe that this is the zenith of my career, after spending eleven years in radio, acting and hosting. Post one set of goals comes the other – hence I would like to focus on hosting weddings in the UK and internationally. Weddings give immense pleasure and emotional satisfaction, despite how tiring it gets by the moment, it is a pleasure to be amidst of happy people around”

Talking about when she felt the high in her career, she recalls she enjoys most hosting a big scale concert.

According to her, it is fun and gives a different buzz. The show provides an open space to talk with my audience one-on-one, and that is a different high in itself, a sort of validation for her excellent work.

Her real passion is dancing. It is joyous and liberating for her. She likes it when it is well choreographed, practised and performed hence, it doesn’t make her quit at any stage in between.

She feels like her guiding light has been her sister, “ She has been the one guiding and supporting all through the while. From choosing my career path to help me shop and ‘boys’ she helps me vent and encourage me to expand my horizon.”

“The field of work I have chosen for myself is enjoyable. Media is not all glamour; it is hard work, research and a lot of being-in-public moments. Thankfully never have I got worried about work, it is the way I live,” she adds.

To rejuvenate she needs good sound sleep. She feels sleep can get her over anything. It is her stress buster.

Being a radio presenter and producer for the longest time in her career, upon being asked how she thinks Indian music has transcended from where it was, say in the 80’s, she comments saying, “I don’t think it has moved up the ladder. Instead, it has become somewhat unswerving. Indian music has a charm like no other and even though there is much hustle and coming in of new talent – they are continually banking upon the old hits. There is a reason oldies worked back then, and there is a reason why they aren’t working as much now – the answer is remixing. Peppy is okay and fun but does not last long. There is a strong need of creating original, lasting content or else this shall too pass”

On a conclusive note her tip for the youth is a quote saying, “I know it is hard out there. Getting in the media isn’t as easy, but it needs planning and research. Before exploring different parts of your interest, it is essential to know what makes you feel elated and confident. I wish someone held my hand too, to guide my way in. Nevertheless, I would want to do that for anyone who aspires to get in.”