5 things you probably did not know about Holi

Holi not only celebrates arrival of spring but also celebrates the eternal love between the Blue God Krishna and Radha. 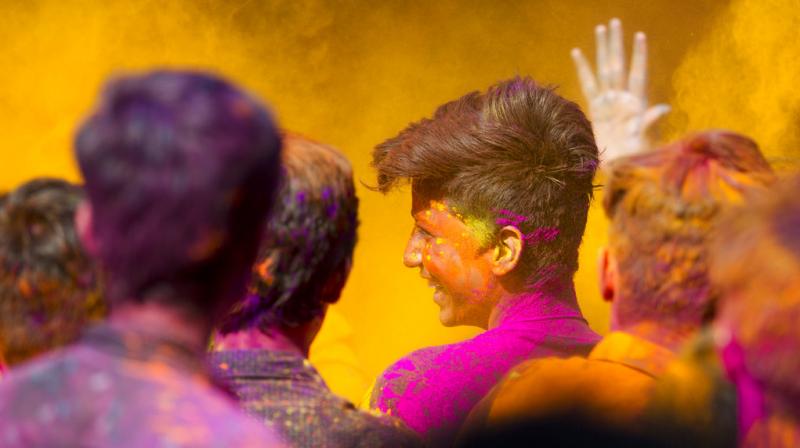 Holi is an ancient Hindu festival that celebrates the arrival of spring and the victory of good over evil. (Photo: AP)

Hindus mark the arrival of spring every year through the festival of colours. Yougsters and elderly alike smear each other with colour.

Here are five things you need to know about this colourful extravaganza.

Holi is an ancient Hindu festival that celebrates the arrival of spring and the victory of good over evil. The festival also celebrates the eternal love between the Blue God Krishna and Radha. During Holi, people hit the streets in their old white clothes and throw colored powder and spray colored water at each other.

Holi is celebrated for this long: Holi is two days long, which is quite short compared to other Hindu festivals. The actual day of Holi isn’t even on the full moon; it’s the day before. The second day is called Dhuleti, Fuldolotsav Purnimã, or Fuldol. And that’s when everyone gets real colorful.

Myth behind Holi: The story of Prahlad and his father Hiranyakashyap is one of the most popular versions out there. Hiranyakashyap was a king and the gods had granted him a boon that made him virtually indestructible. His son, Prahlad, wasn’t convinced and kept worshipping Lord Vishnu. The king enraged that his own son wasn’t recognizing him as God tried to kill him. After several failed attempts, Hiranyakashyap called his sister Holika for help. He told Holika to trick Prahlad into sitting on her lap while she was on a pyre, thereby burning Prahlad, but not Holika, since she had a boon.

Holika sat with Prahlad on the pyre. Prahlad, however, kept chanting Lord Vishnu’s name and, Holika burned to death instead of him.

On the first day of Holi a huge bonfire is lit to symbolize the burning of Holika and the victory of good over evil.

Here is how it is celebrated: In Punjab, Holi is celebrated a day early. In Manipur, Holi is six days long and is combined with the festival called Yaosang. In Bengal, various Vaishnav sects celebrate it differently. In Vrindavan and Mathura, celebrations go on for a week.

Timing is synchronised with moon: The date of the celebration varies every year in accordance with lunar cycles. This year Rangwali Holi takes place on 2 March, while the pyres of Holika Dahan will be burned the evening beforehand.