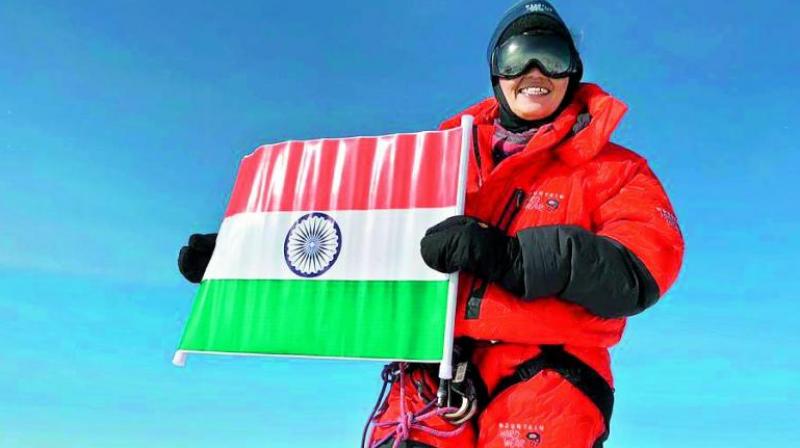 Radhika after climbing the Mt Vinson, the highest peak of Antarctica

Challenging herself and stepping out of her comfort zone comes easy to Radhika G.R., Superintendent of police, OCTOPUS (Organisation for Counter Terrorist Operations). The 43-year-old recently climbed Mt Vinson (4,892 metres), the highest peak of Antarctica.

Speaking on the experience, the mountaineer says, “Our Vinson expedition started on December 8 at Punta Arenas and was expected to be completed by December 18. Though we could successfully climb the peak, due to bad weather, we had to stay at base camp for 10 nights after scaling the summit for the flight to operate from Union Glacier. This was the rarest situation in last 20 years at Antarctica.” Climbing Mt Vinson is part of a greater challenge. This involves climbing the highest peak of each of the seven continents. In the all women’s team, three of them, including Radhika are in pursuit of the Seven Summits Challenge.

For Radhika, this goal is not far away. Having scaled six peaks in as many continents Asia, Africa, Australia, Europe, South America and Antarctica – to date, the only one remaining for her to complete the Seven-Summit Challenge is Mt Denali in Alaska, North America.

Talking about challenge she faced during the Mt Vinson expedition, Radhika says, “Being a vegetarian is the foremost challenge I have faced in all my climbs. They mostly serve food that contains meat, beef, pork or chicken in mountains. Since I am a pure vegetarian, I had to eat food like bread and pan cakes as other vegetarian food is not easily available. As a result, even to maintain minimum levels of energy, I had to struggle. I cope with this by carrying some ready to eat foods. There is also the extreme cold and rough weather in Antarctica.” There are many reasons why Radhika’s accomplishment is impressive, especially considering the effort, both physical and emotional, that she’s put forth over the years to make this happen.

Training regimen
An adventure loving, fitness-freak-turned-mountaineer, Radhika trains daily. “I run two miles daily. I do other workouts in gym. Apart from that, I practised pulling a lorry tyre with 20 kg weight in my backpack for 30 minutes everyday. This helped me in pulling the sledge at Antarctica where our duffel bag was put in a sledge and we had to pull it on snow from base camp to camp one which was a distance of about 14 km. We had to climb a vertical ice wall on 400 metres fixed rope.”

Encouragement and Inspiration
Radhika, who, out of enthusiasm, took the mountaineering course from Jawahar Institute of Mountaineering and winter sports, Pahalgam, Jammu & Kashmir in 2013. She says. “Principal secretary Rajiv Trivedi encouraged me to do the mountaineering course. Later I climbed  Mt Golep  Kangri,  Mt Menthosa and Mt KUN. Also the present L&O DGP Harish Kumar encouraged me and with the financial help from ONGC, I climbed Mt Elbrus, Europe in Sept 2017 and Mt Aconcagua in South America in Dec 2017. This year with financial support from the Andhra Pradesh Government, I climbed Mt Vinson of Antarctica.” What makes Radhika’s accomplishment all the more impressive is the fact that she did not start climbing mountains until 2012. Her only encounter with the Himalayas prior to that was a trip to Kailash and Manas Sarovar Yatra earlier in the same year. Hailing from Anantpur, she is the first Indian woman police officer to climb Mt Everest, and first Indian police officer to finish the Aussie 10 Peak Challenge.

Radhika’s mother, who is her inspiration, gets constantly motivated by the success stories of women in various fields. All of them make me feel more enthusiastic of life. “I get motivated by looking at my active 78-year-old mother. Apart from her, any woman who is actively pursuing her goal inspires me,” she concludes.