Apart from inviting people through newspapers, Gurudwara committees are sending refreshments outside ATMs 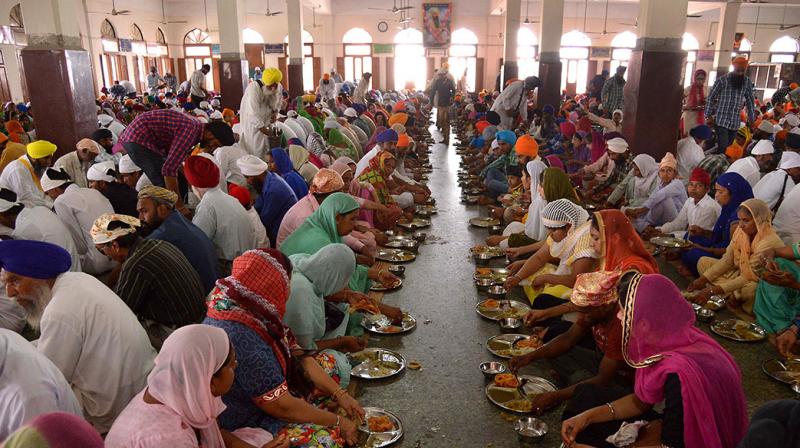 Pushkar: Diverse groups of people have been affected by the decision to demonetise high denomination notes which rendered Rs 500 and Rs 1000 currency notes as useless for transactions, as several around the nation were left cashless and lined up outside banks and ATMs, which also failed to meet the sudden rise in demand for cash.

Apart from several daily wage labourers who were left jobless, tourists were also the ones who were affected by the cash crunch, as a video of cash strapped tourists singing and dancing in streets of Rajasthan’s tourist hub Pushkar to make ends meet went viral. While the Sikh community came out to serve tea and ease difficulties for those waiting in lines, Gurudwaras seem to have become a refuge for many left cashless due to the crisis.

The lines of people coming for the langar at Gurudwaras in Pushkar have been getting longer each day, with labourers, locals and foreign tourists flocking outnumbering devotees, for getting a sumptuous meal due to a shortage of cash. The Gurudwara Prabandhak Committee also did its part by placing advertisements in local newspapers, calling on people in need to have meals at Gurudwaras.

A British duo were advised to visit the Gurudwara for free lunch and dinner when they were struggling with their expenses, and were all praises for the service by the Sikh community, as they expressed displeasure at the handling of distribution of new notes.

Meanwhile the Gurudwara committee is also planning to distribute pamphlets for reaching out to more people in need of a meal and volunteers have also been visiting ATMs and banks with refreshments for those waiting in lines.

There are several labourers around the area who are jobless due to the move and have been visiting the Gurudwara since several days, as they get the same warm reception each day, as one labourer said that he is doubtful about getting work in Pushkar at the start of the day, but is sure that he won’t go hungry.