A drop of sunshine

Kendy Zirdo from Arunachal Pradesh will make her debut in Mollywood through Android Kunjappan Version 5.25. 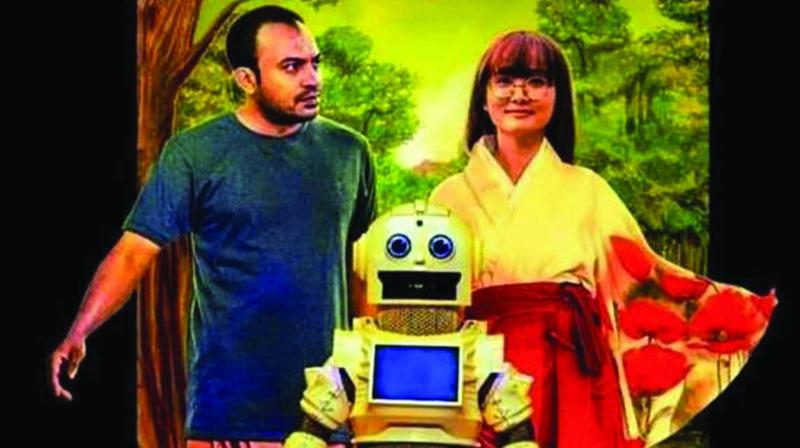 Mollywood is seeing an influx of heroines from other industries, either making their debut or doing repeat appearances.

‘She is love. She is laughter and oodles of sunshine all rolled into one. Presenting the very talented Kendy Zirdo, a gem we discovered from Arunachal, after travelling far and beyond,’ is how the makers of the Soubin Shahir starrer Android Kunjappan Version 5.25 let the cat out of the bag, while revealing their heroine. Kendy, sitting on a rock, dressed in a short green shift dress, sporting a fringe hair cut with a pleasant smile lighting her face, no doubt looks like a ray of sunshine.

Mollywood is seeing an influx of heroines from other industries, either making their debut or doing repeat appearances. Thanks to cinema turning pan-Indian and the emergence of  OTT platforms, barriers of language and culture seem to be increasingly immaterial to actors, as Kendy joins a long list. She, who hails from the beautiful land of Arunachal Pradesh, has travelled miles to make her debut performance in Android….

When we caught up with Kendy, she was at the airport, waiting to catch a flight back to Arunachal Pradesh. Shedding light on her professional background, Kendy informs that she has been active in theatre since her college days. “One day, I saw a poster of a theatre workshop. I immediately called up that number and enquired. That is how my initiation into the world of theatre began.” The lilt in her voice is evident when she says, “I have been on the theatre stage plenty of times, but never acted in front of a camera on the big screen. Android… is my debut appearance and this is my first interview.”

It was a junior of the director of Android… Ratheesh Balakrishnan Poduval, who informed Kendy of the opportunity to act in a Malayalam film. Kendy flew all the way to Kochi to give an audition for the part and the rest is destiny. “Ratheesh sir liked my acting and that is how I became a part of Android….” Admittedly, the language was alien as also the culture and the food, but dedicated actors have never let such obstacles deter them. “Yes, the language was difficult to grasp and Malayalam is not an easy language to understand. I took two days to completely learn the script,” she mentions. “There was even a time when I thought I may not be able to play my part. Then I learned my dialogues all through the night and practised my lines in front of the mirror and the next day was magical! I could utter the dialogues without a hitch! That was a proud moment for me,” she exults.

Kendy plays the role of a girl called Hitomi who is half Japanese and half Malayali. “My character is settled in Russia and Soubin is my love interest. I then travel to Kerala,” she briefly talks of her character. Kendy has words of high praise for Soubin, who she says was very helpful. “He is such a funny person, too,” she adds, mentioning that at no point did she ever feel that she was working with a celebrity. “He never had any superior airs about him. I never felt that I was working in a land of strangers and Soubin and the crew made me feel totally at home. Soubin would help me with the script and I had a fun time here.” Kendy is happy with the way her role as well as the film has shaped up. “I really worked hard on my dialogues and hope the audience likes me,” she says.

The 19-day-long schedule of Android… also necessitated that she get a taste of Kerala cuisine. Kendy surprises when she says, “Actually, the North-East part of India and the South of India partake food with an abundance of spices; so I did not have any difficulty adjusting to the food.” Kendy loved the cuisine of Kerala, especially the dry fish and chutneys. “I also like that the food is served in plantain leaves.”

Taking a break from films, what other passions does Kendy share? Again, she springs a surprise. “I love designing costumes. See, in theatre we have a lot of activities like set design, making props, lighting etc. My forte has always been acting and costumes!” So, will the future see Kendy, the costume designer making an appearance? The answer is peals of happy laughter from the other side.