From exclusive to inclusive

LMIFW SS’20 embraces inclusivity as modelling surpasses the barriers of skin colour or age in becoming a model. 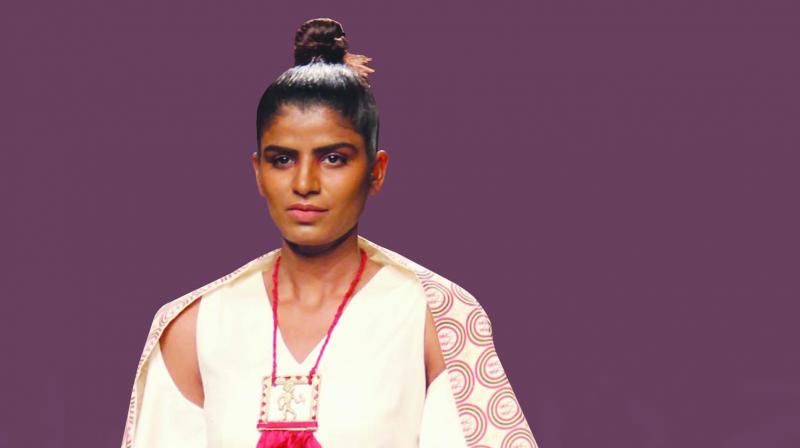 Her father is a cook in the Air Force mess and mom a homemaker. Hailing from a small town in Jodhpur, Sangeeta Gharu could never have imagined her dream of walking the ramp to come true one day. All her life, she was made fun of by her school friends and family for being “really dark”. “I really struggled with confidence issues and became reticent. It took me two years to get selected for a ramp show. I applied everywhere and was rejected by everyone even after giving multiple auditions and putting myself through rigorous grooming sessions, all of which was self-funded. Most selectors thought my skin colour was not appropriate for this,” says Gharu.

People’s remarks still ring in her head, “She is so ugly, who made her a model?” or “She must be delusional to think she is model material” or “Look at how she dresses; that colour looks awful on her” and “Why is she wearing red lipstick, she is so dark, it doesn’t suit her”.

According to Gharu, fair skin and light eyes are considered the gold standard of beauty in India, no matter how much we say we love “dusky girls”. Foreign models get preferred over Indian girls and bag the most lucrative deals. Whether it is in the jewellery industry or fashion, we as a nation suffer from a colonial hangover. “I am really glad that the Fashion Design Council of India has given me an opportunity to walk for the Lotus Makeup India Fashion Week, spring-summer’20 (LMIFW), their theme being inclusivity this year. They are redefining what beauty means and how it should be perceived, not based just on physicality, but on individuality, which is heartening,” says Gharu. This time, the FDCI has taken models not based on a particular height, weight or gender restrictions while holding auditions in three cities — Delhi, Mumbai and Kolkata.

The world has been shifting its perspective. Jeans brand Diesel has for years now taken Winnie Harlow, who has vitiligo as their muse along with Jillian Mercado, who was diagnosed with spastic muscular dystrophy as a teen. Signed on by IMG Models, Mercado became the first disabled model in the world to get this deal. Hijab-wearing model Halima Aden posing for Sports Illustrated’s cover wearing a burkini went on to become a sensation. But still, most foreign brands don’t have sizes beyond size 12, ignoring the fact that most Indian women wear a size 12 or above. J Crew has expanded its size to 24 now and wants to change how we look at “ideal” body type.

This year will also mark the presence of a mother of a 14-year-old, as a model at LMIFW. At an age when most models hang up their boots and throw in the towel, Runa Laha, 40, is ready to sparkle in the arch lights. Selected at the Kolkata auditions by FDCI, she wasn’t allowed to take up modelling due to her father’s insistence that she studies to become a professor. Her mom still thinks she is wasting her time.

“I gave up my dreams for my parents and focussed on an MA in political science and started teaching, till one day I met up with school friends and they commented on how much weight I had put on, 92 kilos, after my C-section, and how unhealthy I looked,” says Luna. A determined Luna lost all the weight in a year, saw an ad in a Bangla magazine for Ms Kolkata competition applied there and won it. Thus began her journey into modelling at the age of 32, eight years ago.

There are very few models who continue after becoming a mother. Most start at 18, and their careers are over by 30.

But Luna is a change away from this norm, and says, “Age is just a biological number and I never feel awkward modelling with girls half my age. You no longer need to fit the stereotype. My husband and son are my biggest supporters and they encourage me to take on assignments, which make me happy,” she concludes.