“I started visiting schools and taking classes for children studying in Class VI & above,” adds Anson hoping the activity will bear fruit in the end. 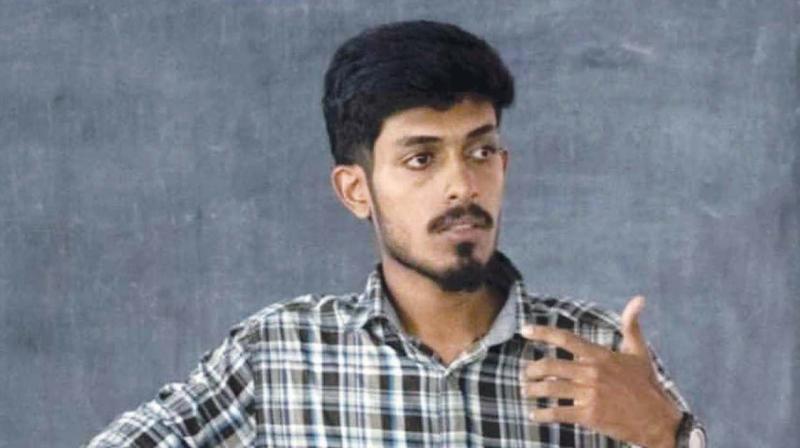 B. Arch student Anson Babu’s fight against cancer and plastic is rooted in the demise of his mother whom he lost to cancer.

Anson Babu is on a mission. His fight against plastic and cancer began after he lost his mother Jaya to cancer. He checked what causes this deadly disease and realised that plastic is one of the many villains. “Then I decided I should deal with both,” says Anson, a final year B.Arch student at KMEA College of Architecture, Edathala.

“As a first step, I stopped using plastic at home. Then I talked to local shop owners and asked if they could replace plastic carry bags with paper or cloth ones. However, they refused it citing cost issues,” says Anson, who then moved on to taking classes for children in schools.

“I started visiting schools and taking classes for children studying in Class VI and above,” adds Anson hoping the activity will bear fruit in the end.

He believes it is his duty to make the future generation aware of these aspects. “My mother passed away on May 20 after battling with cancer for two years. I started taking classes two weeks after her demise. If this had not happened to me, I wouldn’t have come up with an initiative like this,” confesses Anson.

“I take classes in the form of stories. I share my life experiences with them, which I find more effective than preaching theories about cancer. I talk about burning plastic too, as it causes cancer,” he adds.

His work is not just confined to classes. Recently, he started a campaign called Koode and as part of it, he distributed garbage kits to 250 families in Sreemoolanagaram Panchayath. “I told the residents to put all sorts of plastic waste in that large bag. The response was good. All they wanted to know was whether I would be able to take it forward successfully unlike local authorities. So, I need to prove that. I had plans to collect them after two or three months with the help of the Panchayath. But some families called me just after two weeks saying the bags became full. See the extent of plastic waste!” says Anson, who is thinking of a permanent solution to this.

“The panchayath authorities have told me they would dump it at Brahmapuram. But I am not very impressed with that as things are not yet running properly at Brahmapuram. Recently, I have come across a video ‘I challenge plastic’. I am trying to get in touch with the person in that video. I hope he can help me,” he says.

His friends are his backbone when it comes to this project. There are difficulties such as lack of capital; however, team Koode is determined.

They are even working on finding a permanent solution to this. Anson is in talks with a few groups that work towards eliminating plastic. And he is hopeful about a plastic-free future.