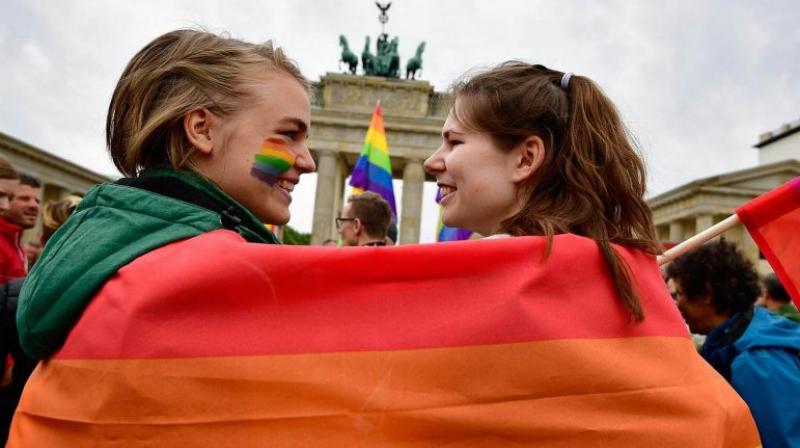 Germany celebrates its first gay marriages Sunday (Oct 1) as same-sex unions become legal after decades of struggle, but campaigners say the battle for equal rights isn't over yet.

Wedding bells will ring out in Berlin, Hamburg, Hanover and other German cities where local authorities will exceptionally open their doors on a Sunday to allow gay couple to say "I do" on the day the law comes into effect.

Bodo Mende, 60, and his partner Karl Kreile, 59, who have been together since 1979, will be the first to tie the knot in the German capital.

"It will be an emotional but also very symbolic moment," Kreile told reporters on Friday. "This shows that the state now considers us the same as other couples."

The dash to exchange vows comes three months after lawmakers voted to give Germany's roughly 94,000 same-sex couples the right to marry, following a shift in position by Chancellor Angela Merkel.

"Marriage for all is a milestone on the path to full legal and social equality," he said in a statement Friday, praising the gay and lesbian community and all those "who fought for many years" to get to this day.

The Netherlands led the way in 2000, followed piecemeal by other European neighbours including Spain, Sweden, Britain and France.

Same-sex relationships have become so normalised that polls show around 75 per cent of Germans are in favour of gay marriage.

Along with Germany's Greens party, the gay and lesbian rights organisation LSVD began its battle for equal marriage rights around the year 1990.

But progress was slow and since 2001 gay couples have had to make do with a civil partnership law, broadened over the years to remove more and more gaps between gay and straight couples' rights.

The final breakthrough came quite suddenly in the end, sparked by Merkel's unexpected announcement in June that she would allow her conservative MPs to vote their conscience on the issue.

Merkel said her thinking changed after a "memorable experience" when she met a lesbian couple who lovingly care for eight foster children in her Baltic coast constituency.

Her surprise shift in position - after 12 years of blockade by her Christian Democrats and their Bavarian allies - was seen by some as a cynical ploy to rob her challengers of a popular cause ahead of this month's general election.

The chancellor herself voted against the bill, arguing that the German constitution still defines marriage as "the union of a man and a woman".

"I still think it was indecent to delay for so many years, and the fact that she voted no," lawmaker Johannes Kahrs, gay and lesbian affairs commissioner for the Social Democratic Party, told AFP.

June was a memorable month for gay rights in Germany, as MPs also voted to quash the convictions of thousands of men convicted under a Nazi-era law against same-sex relationships which had remained on the statute book until 1994.

But there are still an array of issues familiar across western democracies, like blood donations or access to reproductive medicine, where homosexuals can be treated differently.

And the constitution must still be amended to fully protect against discrimination over gender or sexual orientation, Kahrs insisted.

"These are all things that we'll tackle bit by bit," he said.

"The important thing is that we've pushed through the opening of marriage, and that's the signal everyone needed."