At the forefront of change

Huge progress has been made over these decades and the environment is much cleaner in nearly all cities. 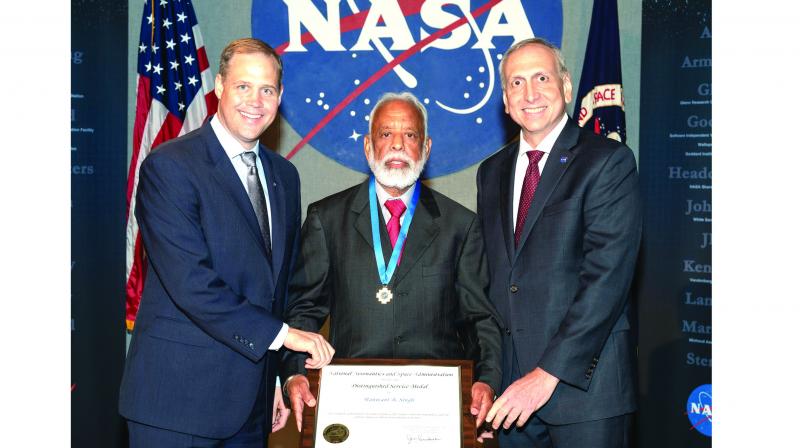 Dr Hanwant B. Singh receiving the NASA Medal of Honour

Earth science is the branch of science dealing with the physical constitution of the earth and its atmosphere. A branch that not many dare to venture into but Dr Hanwant B. Singh, an Indian-American Chemical Engineer, one of the pioneers in the study of the composition and chemistry of the atmosphere, has been selected as the recipient of the NASA Distinguished Service Medal.

During his 32-year career at NASA as an atmospheric scientist, he has contributed major theoretical and experimental ideas to the understanding of earth’s natural atmosphere and the global environmental change resulting from the impact of human activities.

Singh initially started his journey with Indian Institute of Technology, Delhi. But what was it that really triggered him to pursue a career in engineering and then turn towards environmental concerns and finally earth sciences? Singh, who looks back at his life as a series of random events, shares, “I joined IIT Delhi at a time when it was ‘the’ thing to do. In my final year, everyone around me was applying for foreign universities, mostly in US and Canada. Although I had no interest in going abroad, an uncle of mine suggested otherwise as this would be an opportunity for me to see the world, as travelling abroad in those days was very difficult. A friend of mine had two applications left, one of which I used. Because I was near the top end of my class I was given scholarship and admission in both places out of which I selected University of Pittsburgh.”

But that’s not all. While he was finishing his doctorate (1972), the US was in the midst of a major recession and Singh had other problems, such as a proper visa. “I was thinking of returning to India when a post-doctoral position opened up at Rutgers University in the Department of Environmental Sciences. My first foray in environmental sciences was to perform lab experiments to investigate the fate of chlorofluorocarbons that were in wide discussion at that time,” shares Singh, who was behind many firsts, including the demonstration of atmospheric carbon tetrachloride having a human origin, which was initially not a widely accepted view.

Singh believes that both industry and governmental institutions have been reluctant to act on environmental preservation as the focus has always been on short-term costs rather than long-term benefits, a situation that continues to persist. “This conflict also extends to global scales, making it very difficult on sensible progress, especially on problems that may surface on decadal scales. In the early years, there was an argument that chlorofluorocarbons, implicated in the destruction of the stratospheric ozone layer, could not be all that bad because very similar chemical already existed in nature and carbon tetrachloride (CT) was offered as the primary example.

Talking about the new instrumentation Singh has developed and the various field studies he has been through to demonstrate its crucial role in ozone chemistry, he says, “Nitrogen oxides are a principal component in ozone formation but are quite short-lived. We first theorised that reactive nitrogenous organic chemicals must exist in the upper atmosphere and if so can be carriers of nitrogen oxides around the globe. We developed techniques to measure these chemicals (e.g. PANs) and used models to demonstrate their role in ozone formation. We developed a number of other instruments to measure a large variety of species in the atmosphere like phosgene, nitriles and oxygenates for the first time.” Since most of these species were present in extremely low concentrations and required highly sensitive methods of detection and identification, a number of techniques were used to separate, identify and measure these species. Most campaigns were done on aircraft sampling and analysis techniques in changing atmospheric,

T and P conditions were developed. “We then organised several large airborne campaigns to investigate these and other important issues regarding gases, particles, and their long-distance transport.”

Talking about the current battle with environmental crisis, especially in India, with metro-cities being high on smog and air pollutants, Singh shares, “When I first started in this field in the early 1970’s, we lacked proper instrumentation and in the US there were major air pollution problems in large cities like Los Angeles. In the last 50 years, there have been a number of technical solutions (e.g. catalytic converters) with many laws and regulations that were strictly enforced with California leading the rest of the nation.

Huge progress has been made over these decades and the environment is much cleaner in nearly all cities. Use of lead has been eliminated through environmental protection laws.” These changes occurred slowly but successfully and required a societal consensus. “In many megacities around the world like Delhi and Beijing, large populations, rapid growth, and lack of enforceable regulations have been a big problem. Also, the unregulated use of fuels involving transportation, home cooking, agricultural burning is among prominent sources of pollutants in developing countries. The successful model of progress in the U.S. can be easily replicated in developing countries”, adds Singh who strongly feels that though the science of pollution is now well understood but the political courage to act is often lacking.

Singh believes that the climate problem is both local and global and requires local and global solutions as well. “We have also learnt that pollutants of all stripes can be moved around on inter-continental scales but there are no rules governing such situations where one country’s pollution is impacting another country downwind.”

The atmospheric scientist who is now approaching retirement has a cadre of young people to continue the process of understanding the changes taking place on earth and its atmosphere in terms of both science and policy level. “Everyone understands that human activities are beginning to compete with natural cycles and this is the only hope mankind has.  Science is moving forward with satellite-based instrumentation that can remotely and globally detect gases and particles from space.  So far the emphasis in understanding earth sciences has mainly focused on physical sciences, which can be mathematically modelled. There is a large influence of biology in earth sciences that is not well understood and should be an area of future research,” concludes Singh.