As for Rivera’s sexy walk by the sea, she laughed and said, “I tried.” Her goal now is to learn the song’s lyrics so she can sing it in karaoke. 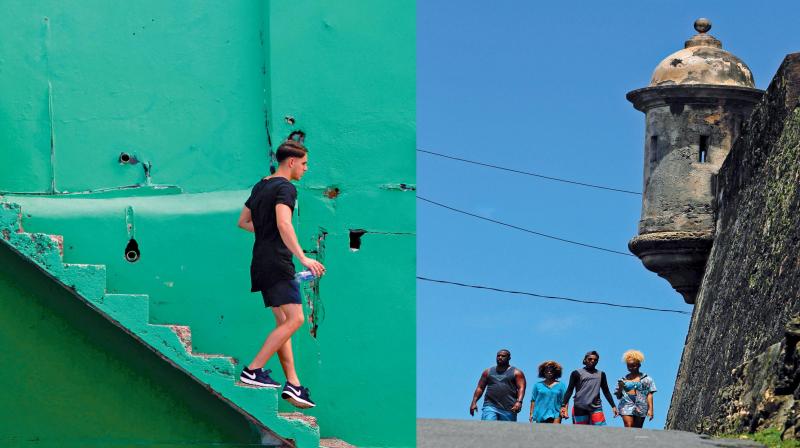 A man walks down the stairs in the neighbourhood of La Perla where the video Suavecito was recorded in San Juan on July 22. (Photo: AFP)

Something unusual is happening in La Perla, a poor barrio clinging to a steep hillside between Old San Juan and the sea where the video for the pop hit Despacito was filmed.

“The gringos are coming!” Outsiders were afraid to venture in before, but since Luis Fonsi and Daddy Yankee’s megahit, tourists from all over the world are descending on the narrow streets that wind among La Perla’s brightly coloured houses. “Despacito?” they inquire.

And the barrio’s residents obligingly point out the locations where the video was filmed: The rocks facing the sea where Fonsi sings the refrain, the sea wall where ex-Miss Universe Zuleyka Rivera strolls, the little plaza where men play dominoes the tables and chairs just as they were in the video.

With the video on the verge of becoming the most watched on YouTube (2.9 billion visits since January, fast approaching the 2.98 billion record held by Wiz Khalifa’s “See You Again”), a barrio once burdened with a bad reputation is now a tourist hot spot.

“I totally came for the tourist video,” said Jennifer Adams, a 28-year-old middle school teacher from North Carolina. “I’ve seen the music video many times and I knew where I needed to go, I got pictures, I tried to dance.”

As for Rivera’s sexy walk by the sea, she laughed and said, “I tried.” Her goal now is to learn the song’s lyrics so she can sing it in karaoke.

Meanwhile, a Swedish woman took pictures of herself in front of Luis’s rocks and a Moroccan tourist ambled along “Despacito coast” as the area around the sea wall has come to be known in tourist brochures.

In a recent interview, Fonsi marveled at the song’s impact on the non-Spanish speaking public.  “The language doesn’t matter,” he said. “What’s important is the flavor, the rhythm, the music.”

The video’s director, Carlos Perez, said Fonsi and Daddy Yankee “had a very clear vision of what they wanted.”

“The key words were culture, sensuality, colour, and dance. What we did, in essence, was to go film in a barrio that had the qualities that supported what we wanted to do,” said Perez.

“But the evolution of La Perla begins and ends in La Perla.”  In fact, residents’ efforts to improve their barrio are independent of ‘Despacito.’

The song’s success is a welcome coincidence that “fell from the sky,” said community board president Yashira Gomez.

Old San Juan, with its cobbled streets and colonial buildings, sits on a hill on a walled peninsula.

The little houses that make up La Perla are clustered on the other side of the wall, where the sea crashes against the rocks.

Its residents have fought tooth and nail to preserve it, and artists like Calle 13, Ismael Rivera and Ruben Blades have dedicated songs to it.  With 1,600 inhabitants, it is one of the poorest communities in San Juan.

Drug trafficking largely drives its economy, with the government trying in vain to clear it. On Yelp, reviewers comment on the dangers outsiders risks going there.

“Please don’t go there! It is NOT SAFE!” wrote user Gaby G in a three-year-old posting. But that is changing thanks to the efforts of the community, which set up a communal baker, cultivated two vegetable gardens and raised $80,000 from private donors to paint 402 houses in vivid colors this year.

“They always said it was a dangerous barrio because we’ve been saddled with a history that wasn’t the best,” said Gomez.

As she spoke, the community board’s vice president, Lourdes Lopez, showed a group of tourists around. Later, she explained that the community’s next project is to set up a small business offering guided tours.

“We take them through the whole community, showing them the most historic things because we have more history to offer,” Lopez said.

— Hotel occupancy in May rose nine percent compared to the same month last year, but there are still no overall figures to confirm the impression that tourist visits are up, said Jose Izquierdo, executive director of the government’s Puerto Rico Tourism Company.

Puerto Rico hosted 1.7 million tourists in 2015, six percent of it total GDP, according to the US Senate finance committee.

But even when official figures are available, statistics won’t say how many specifically came for the “Despacito” experience. A bump could also be attributable to the end of last year’s Zika crisis.  But Izquierdo is sure that “Despacito” enhanced the island’s brand recognition.

“All the elements are in place for Puerto Rico to top the list for travelers seeking a Caribbean destination,” he told AFP. And that is good news for the US territory, which has been hard hit by a financial crisis that resulted in bankruptcy in May.Marwan Badran, Hotels.com’s manager for Latin America, said online searches for hotel rooms in Puerto Rico shot up 45 percent this year.

“We often see spikes upwards for locations of hit movies or TV series and celebrity weddings,” he said.

“Puerto Rico is no different now that Despacito has become the world’s most streamed song in history.”