Lost in the rubble

The Ghatkopar building collapse has left several people shaken and homeless. One woman attempts to bring about a change. 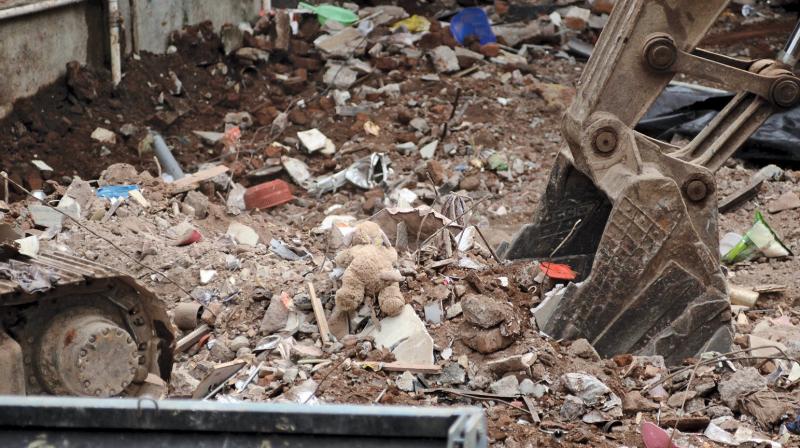 A teddy bear lies lost in the debris of the Ghatkopar building collapse.

It was supposed to be a regular working Tuesday for Binita Ramchandani when she received a few frantic messages from friends telling her about a disaster. At first, like any other well informed person knowing fake news from news, Binita didn’t think much about it. But when these messages wouldn’t stop, she knew something had gone askew.

It came as second-hand news — her parent’s house in Ghatkopar had collapsed. Very soon, news tickers were carrying the news of two wings of the four-storey building on LBS Road in Ghatkopar, which had collapsed killing at least twelve people and injuring more than 19 others. “I was in office and the moment I figured out what had happened, I froze. My first ins-tinct was to rush and get to my parents as soon as I possibly could. I began running. I ran with my laptop in hand, without thinking,” she recalls.

After the thick cloud of anxiety had faded, Binita called up her husband to explain the situation and asked him to get to Hyderabad airport as soon as he could. Then on the very next flight to Mumbai, the couple, along with their two-year-old daughter, finally made it home — a home lost in rubble.

The four-story building, Sai Darshan Apartment, was 35 years old when it came crashing down. “My father had stepped out of the building, moved his car and turned, only to see the building collapse right in front of his eyes. My mother was in the house when the building collapsed,” says Binita. Her mother was stuck in the debris for hours before she was pulled out. “When she got out, she said she felt all right. But then, in a little while, she started experiencing intense back pain. And today, she is in the hospital on complete bed rest, where she will have to be for the next six weeks,” the former Mumbaikar says.

Recalling the nightmare that the past couple of days have been, Binita sheds light on the troubles of the residents of the building. “We have lost our homes, all our belongings, property, and important documents. We are left with nothing. We don’t even have a change of clothes,” she rues into the phone as she is running up and down the corridors of the BMC office in the city in the name of justice.

Amidst all the chaos, the former journalist is doing all in her power to bring the real culprits to light.

Sharing the plight of the residents, Binita is making full use of social media websites to bring the issue to the attention of, not just the authorities, but also the people. “I’m not new to such disasters. I have read a number of case studies following similar accidents, where the victims haven’t got anything — no justice let alone any compensation. But, we aren’t going to be the same,” she says, determined.

Today, the first live video she published on Facebook has been shared around 15,000 times with hundreds of people even commenting and offering some kind of help to the victims and their families. “People shared the video so many times. I don’t see it as empathy, I see it as a collective struggle against the corrupt system for justice,” she says, adding that she wants the government and the authorities to know that the government first belongs to its people.

It was barely two days ago when her mother woke up, startled and panicking saying, “Binita, ghar chala gaya (Our home is lost, Binita)”.

“I broke down. Here are two people who have been my pillars of strength all my life, and now I have to see them like this,” her voice quivers as she opens up. “I feel blessed that I have both my parents with me; there are people who have lost their children. Home for them, even rebuilt on this debris, won’t ever be the same,” she laments.