Kick offs for the gizmo gurus

The winners of the game are announced on a weekly/monthly basis. 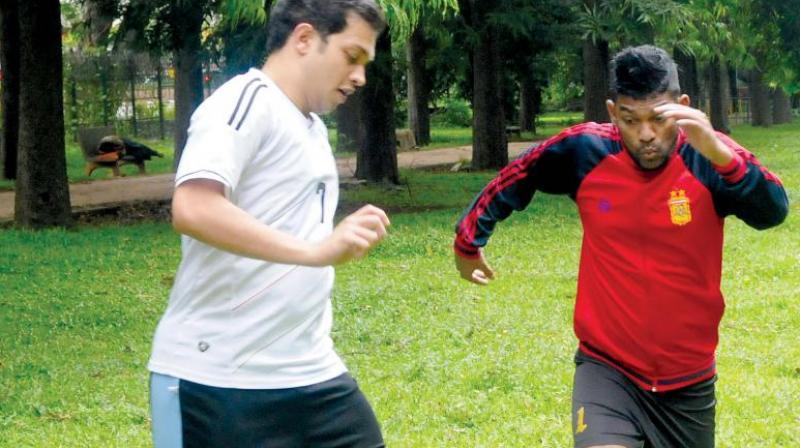 With the FIFA World Cup into the round of 16, indian footie fanatics are busy with fantasy apps to choose playmakers and teams as clicks rule the game even while the live fixture is on.

The ongoing FIFA World Cup 2018 has gotten Indian footie fans glued to their televisions and gadgets as over five million youngsters around the world participate in the Fantasy Leagues on apps and gadgets. They have their playing elevens, and are gaining points on their choices of Ronaldo and Messi, even as others lose with Germany’s shocking exit at the World Cup. While netizens online are wondering how their fantasy football teams will pan out, a few youngsters share their experiences playing footie via click, even as they watch the matches live.

Fantasy football sees participants form an imaginary team of real life footballers and score points based on those players’ actual performance on the field of play, which in this case is the FIFA World Cup 2018. The winners of the game are announced on a weekly/monthly basis.

Shubham Mazumdar, a content strategist has taken part in the game. He says, “There are a set number of players that you are supposed to have in your team. Each player has a price and you are given a budget. It is not possible to pick the topmost players are they are priced higher; you will end up exceeding your budget. It is important to know the players and choose wisely.”

It was revealed that Lionel Messi  — not Cristiano Ronaldo — will be the most expensive player on the game at £8 million. German Thomas Müller was priced at £6 million, that has caused heartache since Germany is out of contention, and as has Lewandowski who was priced £5.5 million.

Ayush Roy, a content head, says, “I play Dream 11. It works on a betting format, that is, we can download the app and begin by betting any amount of money. It needn’t be a huge amount. There are people who bet amounts as small at `20. Based on how the players of your team perform, you may either double your money or lose everything you invested.”

Suraj Balasubramanyam, a football enthusiast and head of analytics in an advertising firm, elaborates, “I have been participating in the Fantasy Premier League for over a decade and I thoroughly enjoy it. It goes without saying that the game demands a lot of your time. You are required to do a lot of research and know about the game and the players. The one good thing about it is that there is no money involved in the game on a mandatory basis. All you have to do is download the app, create a team and you are good to go. Of course, we do bet on teams but that is always on a personal level.”

Various prizes can be won by playing the game. The first prize is VIP hospitality at two 2018/19 matches including travel and two nights’ accommodation. The other prizes and goodies include tablet computers, Bluetooth speakers, Nike manager jacket and so on...

Pritam Sharma, a product manager at sportskeeda.com says, “I have been participating in the Fantasy Premier League for the past seven to eight years. It is almost impossible for us to win a prize because we are competing against a huge number. I have a bunch of college friends; we create teams of our own and compete against each other. More than prizes we play for the thrill it gives us.”