‘Spay’ a thought for the lil’ ones

According to Dr. Jyotsna Mirlay, Spaying or neutering pets is not going against nature in any way. 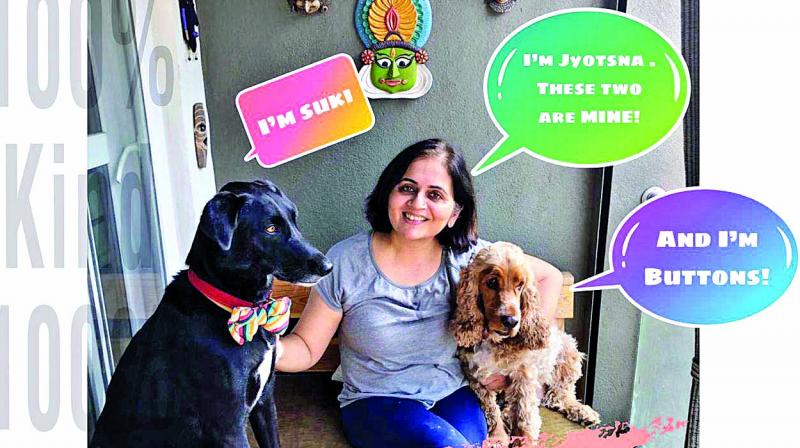 Dr Jyotsna Mirlay, a gynaecologist with her pet dogs for the Spay it forward campaign.

Wouldn’t it be nice to have a flurry of small paws running around the house, as they waddle and fall over each other? Yes, puppies are that universal element that evoke all sorts of mushy feelings. Yet, what would happen if these same pups (grew older), and had babies of their own? And not just one or two but a whole litter of 12! Many folks find that they are unable to look after their litter, and while abandoning them is not a choice, they have taken too much on their plate. To avoid such a situation, spaying or neutering is the only option. Every last Tuesday of February is regarded as the World Spay Day where dog lovers come together to spread awareness. On this day, pet owners are motivated to spay and neuter pets to improve the quality of life of their pets, and indirectly, theirs too.

Entrepreneur and activist Priya Chetty Rajagopal says, “When it comes to pet dogs, only 10 percent of them are neutered. There are two aspects of home pets not being neutered or spayed. One is accidental breeding and also over population. So many pets are abandoned and ill because of their genetic makeup. Street dogs are a huge population. Indian laws on animals are very compassionate but they are not implemented. This campaign is an attempt to get pet owners who have spayed their pets to commit to neutering street dogs as well. BBMP has unfortunately not been able to keep up. They are now making three attempts: All vets need to do ABC’s and WVS trained, they have floated for eight new tenders in Bengaluru, they are trying to get the right people to do the necessary procedures.”

Special additional commissioner D Randeep elaborates, “The BBMP has been sporting the World Spay Day along with animal welfare organisations actively to create awareness. We have brought out a video that is about a minute where all of us at BBMP appeal to people that this is the only way forward. When people are unable to look after the litter, they just abandon them on the streets which is not correct. This brings along a lot issues that the city corporation has to face.”

Lopa Saikia is a pet parent to over six rescue dogs, and she is all for spaying and neutering dogs, “Over three years ago, I rescued a Lab who had cancer in the ovaries. This situation could have been avoided if she had been neutered before hand. It’s important when it comes to the health of a pet. But when you spay and neuter a dog, the biggest side effect is that they tend to gain weight which needs to be regulated.”

Spaying or neutering pets is not going against nature in any way. Dr Jyotsna Mirlay, a leading gynaecologist  says, “I got my pets neutered within their first six months. I did it for several reasons. Firstly, I had no intention of using them for breeding, it had health benefits like reducing the risk of cancer of ovaries and breast in the case of the girl. There are a few disadvantages when they are spayed as they put on weight, but I’m a careful pet parent giving them healthy food and a lot of exercise. I don’t think spaying them goes against nature. In the world we live in today, it’s important that we be responsible as pet parents.”

City-based vet Dr Chamapak Naik who is a pet parent to two dogs and two cats feels, “Neutering pets has a lot of health benefits. The stigma comes from humans attaching human emotions to pets. Neutering them doesn’t make them dull, doesn’t take away something that is natural from them, they also do not lose their personality and habits. Neutering is a form of birth control that reduces aggression and territorial behaviour. It is not a complicated procedure (taking upto 30 minutes to an hour for females). Any vet with a basic amount of knowledge about the procedure can do it.”