The pastor claimed that some people were healed of various medical complaints after he had sprayed them. 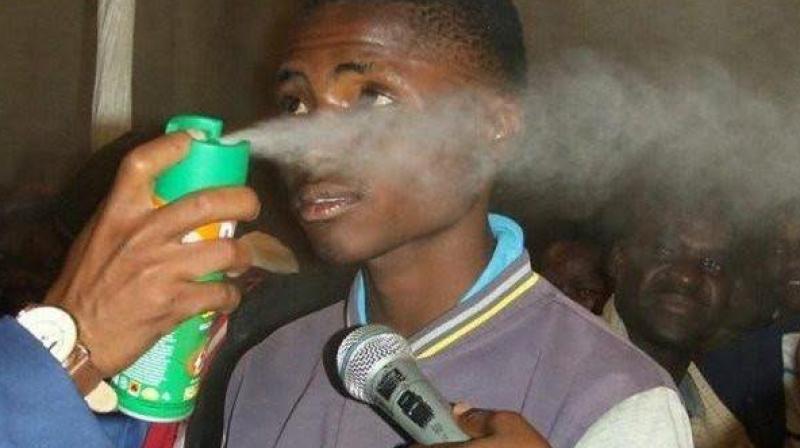 Rabalago said at the time he was “glorifying God” by spraying his congregation at the Mount Zion General Assembly church (Photo: Facebook)

A South African court has fined a self-styled prophet who sprayed his followers in the face with insecticide as a supposed cure for illness.

Pastor Lethebo Rabalago was found guilty by a court in the northwest town of Limpopo of five charges of grievous assault and contravening chemicals laws .

He used “Doom”, a household insecticide on his followers, earning the sobriquet “Prophet of Doom”.

The Sowetan daily reported Wednesday that the presiding judge jailed Rabalago to four years or a 21,000 ($1,700) fine.

“We have made an arrangement that my client will pay 3,000 rand in instalments every month until the fine is fully paid,” Lubusi told the paper.

Photographs of Rabalago spraying volunteers at his church in Limpopo spread on social media in 2016.

The pastor claimed that some people were healed of various medical complaints after he had sprayed them.

However some suffered the effects for several months.

Rabalago said at the time he was “glorifying God” by spraying his congregation at the Mount Zion General Assembly (MZGA) church.

Brand Tigers, which manufactures the spray, had issued a statement calling on Rabalago to halt his ritual healing and stressing the dangers of using their product on humans.