Thinking about cognition is meta-thinking or meta-cognition. 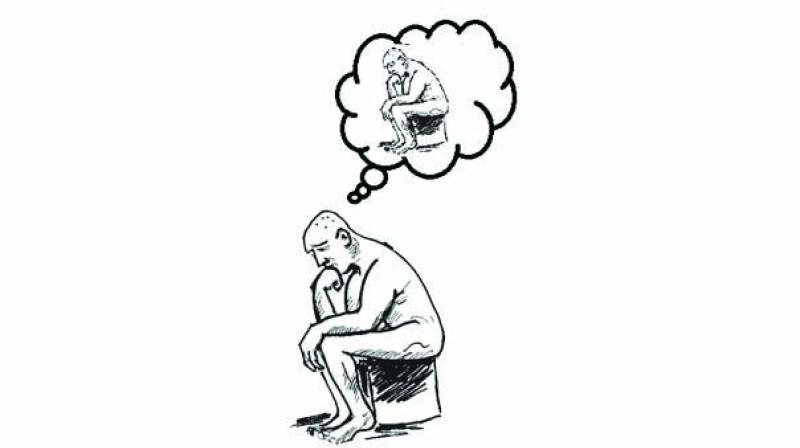 Meta-cognition was long regarded as a unique human ability, but recent studies have discovered such abilities in chimps and monkeys.

Consider yourself a participant in a knowledge-based game show where you are asked, “Which city hosted the 2008 Olympics?”. If your mind works like mine, you would think backwards to reach the answer; Rio 2016, London 2012, and yes, 2008 was Beijing. As you progress in the game, questions get tougher, and touch areas where your memory is not as good. For example, “When did Kerala last host the National Games?” A string of thoughts on the repeated postponement of the event crosses your mind, and you are left wondering, was it 2013, 2014 or 2015? You are now reminded that you have a lifeline, ‘Phone a Friend’. Wow. But, wait, ‘is my memory about the event so bad that I should phone a friend?’ Or ‘should I preserve the lifeline for a later question?’ Let us contrast the thoughts invoked by the Olympics and National Games questions. The first question prompted thoughts about facts you know. The second got you to think about how accurate your thoughts are, to judge whether the lifeline is worth going for.

Researchers make a distinction between these, and call the second one as meta-cognition, or thinking about thinking. Meta indicates self-references – e.g., a speech on public speaking may be called a meta-speech. Similarly, thinking about cognition is meta-thinking or meta-cognition.

One need not go to a game show to experience meta-cognition. It is all too common in daily life. The tip-of-the-tongue experience is one such example. This is when you know that you know the name of an old friend, but can’t recollect it at the moment. It is sometimes fun chasing the memory on such occasions, knowing that the name will eventually come to you. Meta-cognitive judgement reflects in our actions and words too. The question “What is your name?” is answered spontaneously and confidently, whereas “How long did British rule last?” might be answered with raised eyebrows, “I think, maybe, 150 years..”. The confidence that we have in our memory reflects in the wording and delivery. Meta-cognition was long regarded as a unique human ability, but recent studies have discovered such abilities in chimps and monkeys. Monkeys were found to be able to make a judgement of their knowledge, and ask for clues selectively. Yeah, we are not alone!