Speaking to a few artists on display, Abhishek, a young artist, he says that it is a great opportunity for an artist like him. 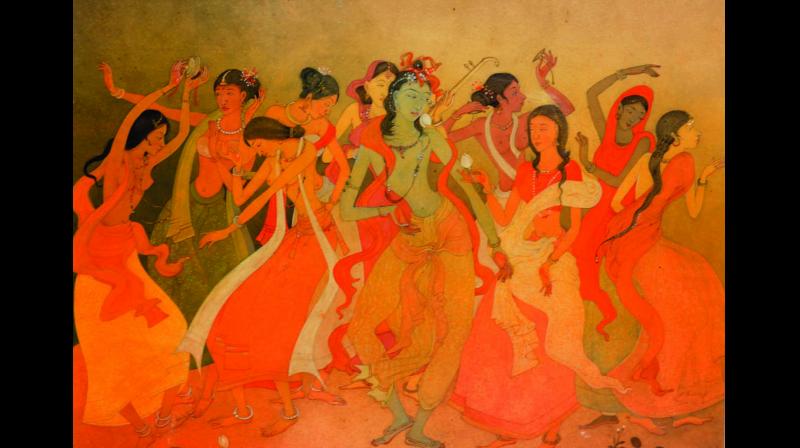 Currently, the 12th edition of the India Art Fair is ongoing at the NSIC Ground, the fair boasts of over 81 exhibitors from 20 Indian and international cities. And not just that, a variety of works were on display. Be it from the traditionality of the oil and acrylic medium to the modernity of frescos and installations.

Apart from what is on canvas, there are other hotspots where you can suck in the artistic vibes, one could witness the performances of legendary artists like Maya Krishna Rao, Jelili Atiku, Piyali Ghosh and many more.

Jagdip Jagpal, Fair Director, shares, “India Art Fair has grown extraordinarily in its last 12 years creating a spotlight on South Asian and Indian art.” She further adds, “ Modern and Contemporary South Asian art remains the focus of the fair, with 70% of the floor space dedicated to Indian galleries and an esteemed line up of artists not seen in India presented by international galleries.”

Speaking to a few artists on display, Abhishek, a young artist, he says that it is a great opportunity for an artist like him. He continues, “Displaying your works next to some great masters and contemporary artists is a big thing for me.” Speaking on what he has displayed for the show, his works are a representation of the issues ongoing in the contemporary socio-political world. He depicts himself by pushing the man in the painting to act as a protagonist. He adds, “If you are an artist or even a member of society, how you are going to react is represented (in these works).”

His series of works are based on the idea of self-validation as one would have to validate himself or herself when you face day-to-day situations. He incorporates hand-bleached technique with watercolours.

But the fair is not only about showing your creativity — it is to express what is going on. For artist Probhir Gupta, that is exactly the case. His installation pays tribute to the mothers of Shaheen Bagh.

“I thought, apart from me going there, as a practitioner of the medium I use, I must speak about it in some way or the other.”

The reason why the comb is being used as a symbol of tribute is because for the artist it is a “very typical symbol that represents the interior — a personal and a physical interior.”

Speaking to Avijit Dutta, another artist on display showcases the mechanical nature of humans in terms of “how emotionless, heartless life is every day”. On his works, he says, “It is a recall of time and a juxtaposition of time and memory together. I showcase the paintings with a lot of dialogue and conversation with the viewer.”

Speaking on the use of Tempera on paper, he says, “Tempera technique is using the pigment where there is a huge layer after layer. When the same colour is being used layer after layer, it is tempered.”

But that was not all, there was legendary photographer, Martin Parr, who apart from displaying his photographs, clicked photographs of people while they visited the exhibition. “I very much like the idea of bringing photographs back to the people who are in them. This is the best way to do it, to take them, print them and show them and hopefully people see them.”

How does it feel to showcase the photographs in a fair like this, he simply responds, “It couldn’t be better. You’ve got the perfect audience and if this lot doesn’t appreciate a photograph, I don’t know who will.”

On the subject about capturing people while they view works from not just India but from all across the world, he concludes, “I am making art out of people looking at art.’