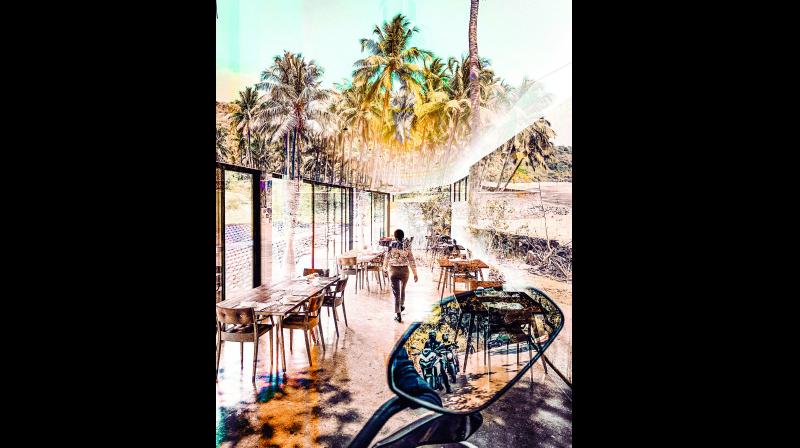 Growing up in the US, Hussain graduated in visual arts and has developed a knack for experimenting with various art forms.

When you find the perfect frame amidst pristine hills and lush green valleys, you’d want to capture the beautiful scenery for posterity. But what happens when you are not allowed to take photographs of the place? Mostly you would want to capture it in your memory and move away. But this isn’t the case with legendary painter M F Hussain’s grandson Salamat Hussain. For him, the prohibition allows him to explore new visions and imaginations and his recently concluded solo exhibition titled Not Allowed, is an example of his shifted imaginations from the existing, tempting but prohibited locations.

“There were so many places where I wanted to shoot but I wasn’t allowed. That gave me different imaginations about what I actually want to capture. I looked for other spaces, which were open and welcoming for shooting,” says Hussain, who grew up learning to paint and sketch from his grandfather and later found his calling for photography during his school days in the USA.

His recent photography work of vibrant landscapes was interspersed with intriguing colour combinations, drama and shades, making it an interactive work of art. With multiple layers and shades, Hussain’s work appears like a moving painting that follows strong aesthetics of colours and canvas. Hussain shares that his process is much akin to a painter’s course of action. “I take a lot of time to finish my photography. I add a lot of drama and strength in it. My camera is my blank canvas and then, I think about colours to bring the vibrancy,” reveals the photographer whose exhibition was displayed at Nine Fish Art Gallery in association with Dot Line Apace Art Foundation.

Growing up in the US, Hussain graduated in visual arts and has developed a knack for experimenting with various art forms. “I am an expressionist than a card-carrying activist for the medium of photography. I constantly shoot and sharpen my eyes. I also deviate from photography to other arts like sketching, sculptures, books to sharpen my photography,” shares Hussain.

Being the grandson of the master painter does come with a lot of expectations but the photographer believes that each person has to forge his own path. “I am blessed to be his family and there were, of course, a few things which were laid out but the real struggle of proving yourself as an artist starts when your journey begins,” opines the photographer and adds that it is difficult for a person hailing from a family of a known stature to make people understand that the journey is different. “He (M F Hussain) was genius and there is no one like him, so it is wrong to see the other person in the same light,” he adds.

Talking about his relations with the grandfather, Hussain recalls how his grandfather taught him to view places from their roots. He would motivate Hussain to follow his passion for art and photography. “He would always tell me to keep doing what I love. He asked me to carry a camera with me the way he would carry his brush with him. He would look at my photography and suggest that I need to look at the roots and aesthetics of the subject,” Hussain reminisces and adds that he still misses the family meeting that M F Hussain would call for whenever he was in town. “He would always encourage all of us to engage in conversations. He would recite his Urdu poetries and engage us in intellectual conversations. I miss those get-togethers,” rues the photographer, and adds that it is impossible to have another artist of his stature. “It’s a faraway thing to be an artist like him. He had determination, curiosity and courage to take failures. He was a self-critic and was a man of immense patience,” he muses.