While asthma is considered a winter disease, cases of asthma induced by allergy are reported during summers as well. 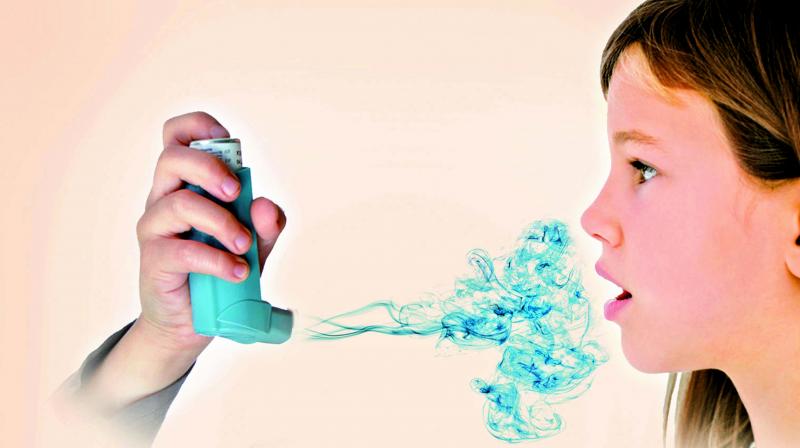 The symptoms of an asthma attack are the same in any season.

While asthma is considered a disease of the winter, some patients experience more pronounced incidences of shortness of breath, cough and wheezing in the summer. This is because the air quality deteriorates due to greenhouse gases, extreme temperatures and the ever-mounting threat of climate change, explains Dr. Nagarjuna Maturu,  senior consultant pulmonologist.

What can trigger an asthma attack in the summer?
An increase in the concentration of grass and weed pollen in the air. Asthma symptoms worsen due to extreme heat conditions, fluctuation in the temperature and, also, high levels of humidity. It has been noted that there is an increase in mold spores, which is another trigger. Similarly, the number of house dust mite, which is a very common indoor allergen, also increases in the warm season. There is also a subset of patients who experience symptoms throughout the year. These patients are found to have ‘remodeled asthma’, where their airways become narrow permanently and are at high risk of frequent asthma attacks.

Are new cases of asthma noted in the season?
New cases are very few in the summer. While they may develop any time of the year, the highest number of new instances are identified in the peak winter season.

How do pre-monsoon showers and extreme weather conditions in the summer affect the person?
Extreme weather conditions, followed by hailstorms and rain showers, result in the wind carrying grass and weed pollen, which cause irritation in the airways of the lungs. These particulates can trigger asthma symptoms. An asthmatic patient is particularly prone to an increase in symptoms during the summer.

Spending long hours in air-conditioned rooms can be equally dangerous for a patient. The respiratory tract is sensitive to the dust particles expelled from the filters in the ACs. This will happen often if the filters are not cleaned regularly. In India, air-coolers are also very commonly used. These are a major trigger for asthma and hypersensitivity pneumonitis as the dry grass and water they use for cooling the air carry various fungi. It is strongly recommended that people with asthma avoid using air-coolers. Extra care is required to protect oneself from the rise in symptoms of asthma during the summer, especially because there is a strong belief that it is only a winter disease.

How is an asthma attack in the summer different from one in the winter?
The symptoms of an asthma attack are the same in any season. The common ones are worsened cough, increased sputum production, worsened breathlessness, feeling of chest tightness and increased wheezing. The triggers can be different but not the method of the attack.

What precautions should asthmatics take? Also, please explain the different types of the disease.
The symptoms of asthma vary depending on the stage it is at. There are people who experience them once or twice a week, as in the case of mild asthma. For patients with moderate asthma, symptoms arise typically every day. For severe and chronic asthmatic patients, the indicators are frequent.

Precautions
Prevention is a very important aspect of asthma management. At all stages of severity, it is important to follow certain precautions:
1. Use allergy-proof covers on pillows and mattresses to get rid of dust mites.
2. Ensure clean living and working spaces.
3. Care should be taken to counteract a damp atmosphere near your home and workplace.
4.Use dehumidifiers and air purifiers if the atmosphere is found to repeatedly cause asthma attacks.
5. Outdoor travel has to be planned so as to avoid exposure to dust and extreme climate. It is important to check pollution and weather updates regularly.
6. Drink adequate water to ensure constant hydration of the airways and to prevent drying of the mucus within the airways.
Patients with severe asthma who continue to experience symptoms despite using inhalers and taking adequate precautions may need medical intervention, like bronchial thermoplasty, to manage the symptoms and attain a better quality of life.

Which summer foods should asthmatics avoid?
Avoid foods that come with preservatives as the additives used in food processing can easily trigger an attack It’s suggested that patients avoid cut fruits, packed potatoes, wine and beer, bottled juices, frozen shrimp, pickled foods, etc. It is critical to find out which food items you are allergic to and avoid them.

Should they keep the inhalers close to them even in summers?
Patients with asthma must always carry their reliever inhaler with them irrespective of the season. Those who are on regular controller medicines should continue to use the same. It is even more important to carry the inhalers along when people travel for vacations, as sudden changes in climate are a major trigger.