Life   Health  29 Aug 2017  'Sindoor' powder sold in India and US could have unsafe levels of lead
Life, Health 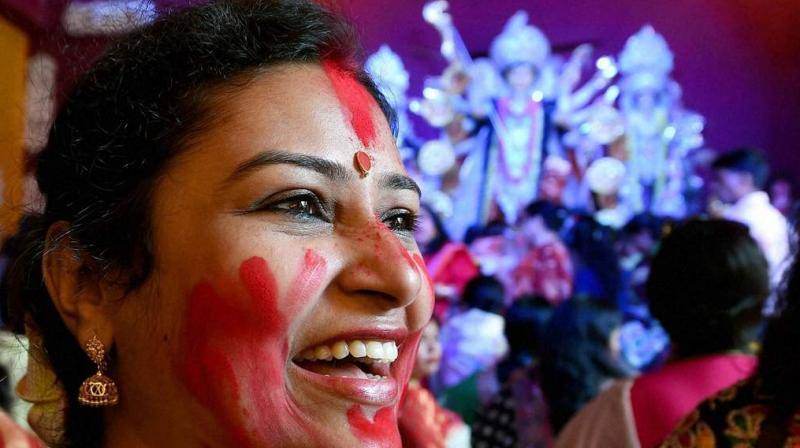 Some manufacturers use lead tetroxide to give it a distinctive red color (Photo: PTI)

Sindoor powder sold in the United States and India could have unsafe levels of lead, researchers warn.

Sindoor, also called vermilion, is a brilliant scarlet powder used during Hindu religious and cultural ceremonies. Sindoor is often used by women who wear a bindi, or red dot, on their foreheads for cosmetic purposes. Married women may also put it in their hair, and men and children may wear it for religious purposes. Some manufacturers use lead tetroxide to give it a distinctive red color.

Of the 118 sindoor samples tested in the study, 95 were from South Asian stores in New Jersey. Another 23 came from stores in Mumbai and New Delhi, in India. Overall, about 80 percent of the samples had at least some lead, and about a third contained levels above the limit set by the U.S. Food and Drug Administration.

“We are diverse here with a lot of individuals who emigrate or travel from many parts of the world through airports on a weekly basis,” said study author Dr. Derek Shendell of Rutgers University in Piscataway, New Jersey. “If there is a product that could be contaminated with lead, it’s of public health interest. There’s possibility of spread through ingestion or inhalation.”

Shendell’s team found that 83 percent of the U.S. samples and 78 percent of the samples from India had at least 1 microgram of lead per gram of powder.

“There is no safe level of lead,” Shendell said. “It shouldn’t be in our bodies, especially for children under age 6.”

“Even low levels of lead in blood have been shown to affect IQ, ability to pay attention, and academic achievement,” the U.S. Centers for Disease Control and Prevention warns. “And effects of lead exposure cannot be corrected. The most important step . . . is to prevent lead exposure before it occurs.”

The FDA’s limit for lead in cosmetics is 20 micrograms per gram. Nineteen percent of the U.S. samples and 43 percent of the India samples exceeded that limit. Five samples - three from the U.S. and two from India - contained more than 10,000 micrograms.

The FDA issued general warnings about sindoor after a 2007 test by the Illinois Department of Health detected high lead content in one brand, which led to a recall by the company. Other cosmetics such as kajal and tiro have been banned due to lead content.

Researchers should continue to monitor sindoor lead levels and make the public aware of potential hazards, the study authors wrote in the American Journal of Public Health.

“Just as we screen kids who live in houses built prior to 1978 with lead-based paint, we should screen children who use sindoor cosmetically,” study author Dr. Bill Halperin of the Rutgers University campus in Newark told Reuters Health by phone.

Since the researchers saw variable lead levels in different samples from the same brand, they say it may be tough to determine which sindoor products have lead.

“That puts the burden on the consumer,” Halperin said. “For parents who want to make decisions to benefit their children, it could be a gamble.”

Pediatricians and parents should talk about cultural and cosmetic practices at home, especially during routine child checkups, said Dr. Cristiana Lin of Pediatrix Medical Group in Scottsdale, Arizona, who has studied lead exposure from imported Indian spices and cultural powders.

“It’s disappointing that we’re still finding products with so much lead,” Lin, who wasn’t involved in the current study, told Reuters Health by phone. “But we can spend time with our patients and ask questions.”

“At the end of the day, you can’t assume people’s country of origin or practices, so you open up the conversation,” she said. “We have to respect families and encourage them to stay in their belief systems but also support them.”

Also, she said, “We need companies to be cognizant of this issue and become partners in creating lead-free products. Consumers should be able to make informed choices for themselves and protect their families.