Beware of the Nipah virus 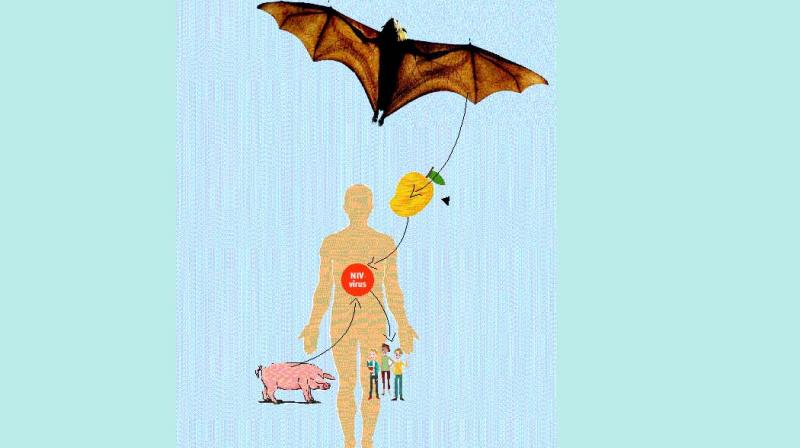 This newly emerging zoonosis affects both animals and humans, and is known to be spread by fruit bats.

The past few days have been scary for people who have been listening to the news and rumours surrounding the outbreak of a deadly infection which has claimed 11 lives in Kerala. Named Nipah virus (NiV) infection, the newly emerging zoonosis that affects both animals and humans, are known to be spread by fruit bats.

First reported in Kampung Sungai Nipah, Malaysia, in 1998, the disease, back then was found to be transmitted by pigs which contracted the virus from fruit bats. In 2004, an NiV outbreak was reported in Bangladesh when humans were infected after consuming date palm syrup contaminated by insect fruit bats. Once contracted, human-to-human transmission of the disease happen, triggering panic.

The latest test results of blood and serum samples of 21 bats found on the premises of the first Keralite victims’ house have ruled out those insectivore bats as the carriers of the virus. Amidst rumours, panic and scare, Dr B. Padmakumar, Professor and Head of the Department of Medicine, Govt Medical College, Kollam, Kerala, explains about the disease, its symptoms and the precautions to be taken.

What is NiV infection?
It’s a relatively new epidemic caused by Nipah virus commonly hosted by fruit-eating bats. Relatively new, because it has been just 20 years since the first instance has been reported. The virus, believed to be transmitted from bats to livestock, and then to humans, spread among humans through body fluids. The virus, with its mutation ability developed for survival, has an incubation period that ranges from three to 21 days.

What are the early symptoms of NiV infection?
The early symptom begins as a fever during the NiV’s incubation period, but since that is a common symptom for Japanese encephalitis or Dengue, it can’t be confirmed as NiV for two-three days. Along with fever, there might be mild respiratory infection symptoms too. Severe infection starts with symptoms like severe headache, disorientation, encephalitis and results in unconsciousness, coma and death.

How dangerous is the Nipah outbreak?
Though the infection rate is slower compared to common cold and influenza, the mortality rate stands at 40 per cent to 70 per cent, which is very high. The current outbreak is believed to be limited to the area of the victims alone; so there’s no need to panic about the situation. However, any case of fever is being referred to as suspected NiV and only after obtaining the test results is the disease ruled out.

What is the treatment procedure?
If a person shows symptoms of encephalitis along with fever, three body fluids — blood, urine and cerebral spinal fluid — and throat swabs are collected and sent for lab tests. Meanwhile, the patient is quarantined and Ribavirin antibody is being administered. If the results that come in three to seven days confirm the presence of the virus in the body, the patient is administered the human monoclonal antibody which neutralises the virus. Intensive supportive care is all that can be done to treat the infected.

What are the precautions that have to be taken to avoid
General health maintenance is the most important factor. Avoid consuming decayed fruits or the ones bitten by bats or birds. Usually, people cut out the decayed or bitten portion and consume the fruits. If a carrier fruit-eating bat has bitten it, eating such fruits could be fatal. Likewise, change your clothes and take a bath after being in a crowd, even if it is a bus or a hospital. Avoid animal contact and if your pets fall sick, take them to a vet immediately. If possible, avoid travelling to the places where the outbreak has been reported, at least for two to three weeks.

Tips to fight NiV
1 Visit your family physician instead of rushing to a crowded specialist hospital.

2 Wash your hands using soap, especially if you are taking care of a patient.

4 Never go for self-medication. Be it is a cold or fever, make sure that visit your family doctor and do not treat yourself.

5 Most importantly, do not believe unscientific news, social media messages or rumours.