Pain-free patch for diabetics may manage blood sugar for days

It is mixed with therapeutic agents and poured into a microneedle form to make the patch. 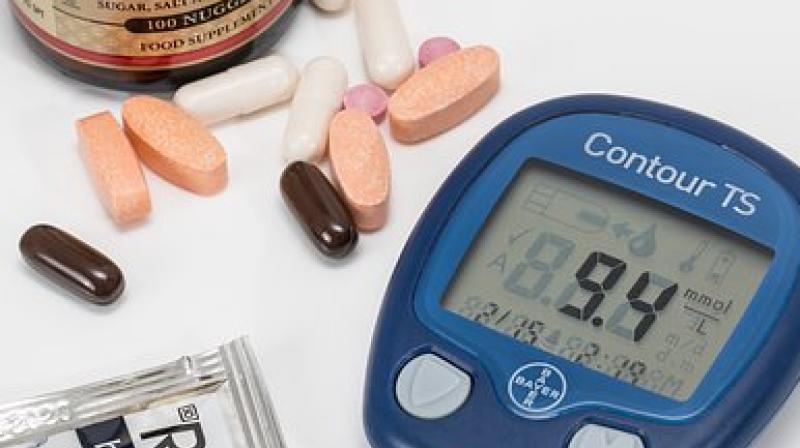 For millions of people with type 2 diabetes, ongoing vigilance over the amount of sugar, or glucose, in their blood is the key to health. (Photo: Pixabay)

Scientists have developed a skin patch that can deliver drugs to regulate blood sugar in diabetics for days at a time, potentially putting an end to the need for painful daily injections and needle pricks.

For millions of people with type 2 diabetes, ongoing vigilance over the amount of sugar, or glucose, in their blood is the key to health.

A finger prick before mealtimes and maybe an insulin injection is an uncomfortable but necessary routine.

Researchers from the National Institute of Biomedical Imaging and Bioengineering (NIBIB) in the US have devised a biochemical formula of mineralised compounds that interacts in the bloodstream to regulate blood sugar for days at a time.

In a study performed with mice, researchers showed that the patch of dissolvable microneedles can respond to blood chemistry to manage glucose automatically.

"This experimental approach could be a way to take advantage of the fact that persons with type 2 diabetes can still produce some insulin," said Richard Leapman, NIBIB scientific director.

Insulin is a hormone made in the pancreas and secreted into the bloodstream to regulate glucose in response to food intake. It is needed to move glucose from the bloodstream into cells where the sugar can be converted to energy or stored.

In type 1 diabetes, usually diagnosed in children and young adults, the body does not make insulin at all.

Type 2 diabetes, which can be diagnosed at any age but more commonly as an adult, progressively lessens the bodys ability to make or use insulin.

Untreated, diabetes can result in both vascular and nerve damage throughout the body, with debilitating impacts on the eyes, feet, kidneys, and heart.

Global incidence of all types of diabetes is about 285 million people, of which 90 per cent have type 2 diabetes.

Many require insulin therapy that is usually given by injection just under the skin. Insulin therapy is not managed well in half of all cases.

For the study published in the journal Nature Communications, the team applied the treatment to mice to demonstrate its potential effectiveness.

The base of the patch is material called alginate, a gum-like natural substance extracted from brown algae.

It is mixed with therapeutic agents and poured into a microneedle form to make the patch.

Chens team infused the alginate with a formula of biochemical particles that stimulates the bodys own insulin production when needed and curtails that stimulation when normal blood sugar concentration is reached.

The responsive delivery system of the patch can meet the bodys need for days instead of being used up all at once.