Authorities in some regions have resorted to encouraging some of the 4.8 million drivers over 75 in Japan to hand over their licence. 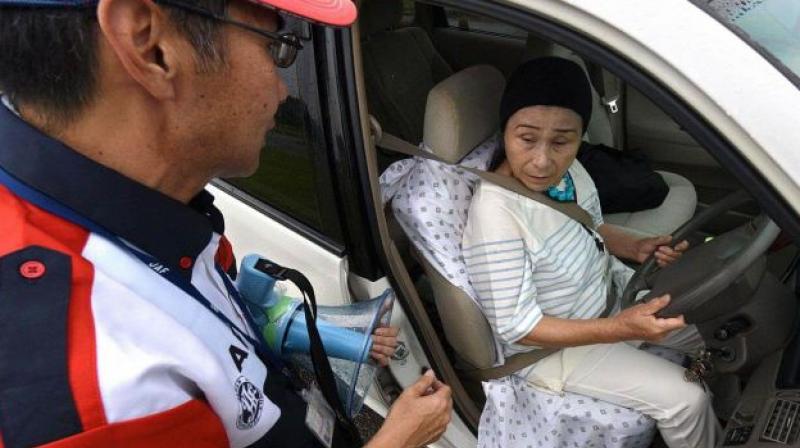 Authorities in some regions have resorted to encouraging some of the 4.8 million drivers over 75 in Japan to hand over their licence. (Photo: AFP)

A series of fatal crashes caused by elderly drivers in Japan has left authorities desperately grappling for ways to clamp down on a problem that experts warn is only going to get worse as the population ages.

Drivers over 65 were responsible for 965 deadly accidents in Japan - more than a quarter of the total - in 2016, according to the National Police Agency.

In one of the most shocking cases, an 87-year-old crashed his truck into a group of schoolchildren killing a six-year-old and injuring others, prompting demands for action on the issue.

In tranquil countryside outside the town of Kanuma, north of Tokyo, on a track surrounded by rice paddies and mountains, a group of elderly drivers are taking public safety into their own hands and completing refresher courses behind the wheel.

The pensioners pilot their cars gingerly between cones while instructors bark out orders via loudspeaker through open car windows as high-tech sensors measure reaction times for emergency stops.

Madam Emiko Takahashi, a 73-year-old woman taking the course, admitted she had "no confidence" in her driving as she got older.

"That's why I came here," she said, adding that she has no choice but to drive her ailing husband, seven years her senior, to hospital every day.

Madam Takahashi said her ability to concentrate had declined as she aged and her reaction times have waned.

"I have become slow," she admitted.

Fatal accidents caused by geriatric drivers now account for 28.3 per cent of the total, up from 17.9 per cent a decade ago, NPA records state.

And with the elderly set to account for 40 per cent of the population by 2060, there are increasing fears for public safety.

Authorities in some regions have resorted to novel ways to encourage some of the 4.8 million drivers over 75 in Japan to hand over their licence.

These include deals for cheaper funerals and discounts on ramen noodles, along with more conventional methods such as cheap or free taxis and buses.

But 67-year-old Kiyotaka Ukita, also taking part in the course, scoffed at these efforts.

"The advantage (of driving your own car) is that you can go wherever and whenever you want. I hope I can continue driving until I die," he said.

Most accidents caused by elderly drivers result from them mixing up the accelerator and the brake or losing control of the steering wheel, the police agency said, calling it a "pressing problem".

Mr Masato Zenyouji, an instructor at the Japan Automobile Federation (JAF), said one of the problems lay in the declining ability of older drivers "to instantly make a judgement, such as suddenly hitting the brake".

"When the speed increases, their field of view narrows down, which could lead to accidents," he said.

The driving course attempts to address this by physical exercises such as stretching as well as drills to improve cognitive functions.

Another factor in accidents is overconfidence from drivers who have often been behind the wheel for decades, said Professor Masabumi Tokoro at Rissho University who has been studying elderly drivers.

According to a survey Prof Tokoro conducted, 10 per cent of drivers in their 30s thought they were capable of avoiding accidents, while the figure stood at 53 per cent for those aged 75 and older.

"They think they can avoid accidents with their driving skills," he said.

Authorities have taken steps with legislation, introducing laws in March forcing drivers aged 75 or older to pass cognitive tests when renewing their licences.

And carmakers are trying to do their bit as well, installing features such as a system that stalls acceleration if the driver steps on the gas pedal instead of the brake.

But this is being rolled out only gradually and only for new models.

According to the transport ministry, the system to slow acceleration was installed in around one-third of 4.4 million new passenger cars manufactured in 2015.

Mr Tokoro believes the problem will not be solved with cognitive tests or bribing older drivers to return their licenses.

"It's inconvenient in rural Japan and you cannot do anything without a car. That's why (older drivers) won't let go of their permits," he explained.

Mr Tokoro said the government needed to foster an environment in which older people can lead a normal life even after handing in their licence.

He cited as examples reasonably priced taxi-sharing services and a drive to encourage older residents to move to city centres from suburban areas.

Japanese IT firm DeNA has been testing self-driving cars to provide a new means of transportation in ageing rural communities by 2020.

Back at the track, Madam Takahashi said she was hoping to continue driving until 85 years old.