According to studies, behavioural addiction is very similar to substance addictions like alcohol, cannabis etc. seen plaguing the society. 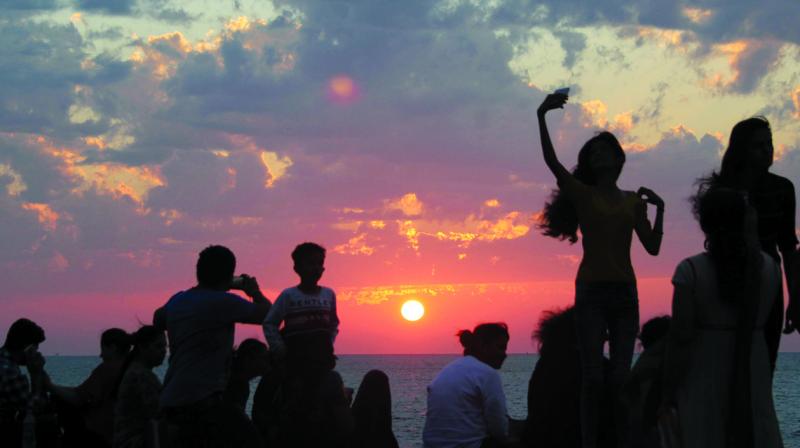 India has had the highest number of selfie-related deaths in the world. (Photo: Shripad Naik)

With the death of Love Island’s Sophie Gradon earlier last week, focus has shifted on sites like Instagram, with people questioning if they are masking a person’s true state of mind and perhaps even fuelling a rise in mental health issues.

In days leading to her death, Gradon’s social media was full of happy holidaying pictures of herself along with her boyfriend Aaron Armstrong. Then what happened?

Apart from seemingly masking emotions (as in the case of Gradon), it seems the act itself prompts people into letting go of their cautious self – more so in India.

A study conducted last year called Me, Myself and My Killfie: Characterizing and Preventing Selfie Deaths, a collaborative study by researchers from Carnegie Mellon University and Indraprastha Institute of Information Delhi, found that India has had the highest number of selfie-related deaths in the world.

Take the example of Priti Pise who drowned when a wave crashed onto the parapet and dragged her out to sea at Marine Drive or Meenakshi Rajesh, 21, who slipped and drowned at Bandra Bandstand in May 2017 and the more recent death of Delhi’s Sarita Rammahesh Chouhan, who fell 500-feet into the valley while taking a selfie at Louisa Point at Matheran, the hankering for social media fame seems to be fuelling more tragedies than happy memories.

Dr Sapna Bangar, Head, Client Care (Psychiatrist), Mpower too is of the same opinion, referring to a recent survey published by the United Kingdom’s Royal Society for Public Health, where it was found that Instagram was associated with high levels of anxiety, depression, bullying and FOMO, or the ‘fear of missing out.’

Dr Bangar adds, “Young people are vulnerable to being easily influenced, have high peer pressure and feeling of wanting to be part of a group. So when they see images of others having 'perfect lives' or 'perfect bodies', their feelings of inadequacy are compounded which leads them to feel inadequate or 'not good enough'.”

Siddharth Upadhyaya, Founding Partner & Chief Strategy Officer, OurHealthMate says, “Addiction to Instagram is causing an upsurge in the mental health crisis. There are lot of fake posts with contrived images highlighting happiness which builds pressure on the peer group leading to expectation mismatch. Depression soon sets in for those who cannot compete.”

Notably, social networking sites like Instagram may fuel mental health issues among those who are already struggling with sensitive problems like poor self esteem, social anxiety, body image issues, depression, and relationship difficulties.

Their vulnerabilities make them turn to virtual relationships as a substitute for the missing social connection in their lives. This, in turn, provides them a medium for false sense of connection or interaction which makes them socially isolated.

Pandey explains, “This social isolation further causes them to be more engrossed in internet based activities, possibly leading to a vicious cycle of social withdrawal. They see virtual world as a safe place to absorb themselves mentally to reduce their tension, sadness or stress. The internet becomes a quick fix to wash away the troubling feelings and is identified as a ‘reward’ by brain’s reward system.”

Furthermore, experts opine that sites like Instagram encourage people to embrace a false self through posting images which go through a lot of filters and editing. Pandey furthers the point by saying that it ruins the concept of self-expression as the self that is being expressed is no more their ‘real self’. However, that ‘distorted’ self is what garners compliments. It also instils a sense of inferiority if they fail to get enough compliments or likes by others in comparison to their peers.

Dr Bangar feels that networking sites should encourage the expression of the ‘real self’ rather than highly-edited imagery.

Upadhyaya adds, “To ensure mental well-being of the youth, there should be support groups educating and raising awareness on possible negative effects of reckless usage.”

In fighting the unhealthy obsession towards platforms like Instagram, encouraging the new generation to indulge in self expression through proper communication is optimum importance.

Experts opine that such a move would encourage the development of empathy in the other person as well as strengthen the social support system.

Practicing ‘digital-detox’ for a defined period on an everyday basis is also something that experts like Pandey and Dr Bangar endorse.

At the end of the day, the key is to educate and empower our youth to use social media responsibly in a way that protects and promotes their health and wellbeing.