Measles making a comeback due to millions unvaccinated

UNICEF asserts on the need to get vaccinated for averting the spread of this dangerous but preventable disease. 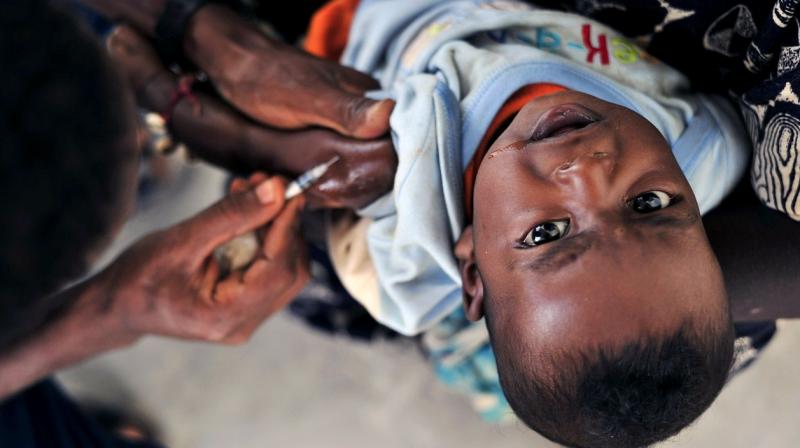 The measles infections worldwide nearly quadrupled in the first quarter of 2019. (Photo: Representational/Pixabay)

More than 20 million children a year missed out on measles vaccines across the world in the past eight years, laying a path of exposure to a virus that is now causing disease outbreaks globally, a United Nations report said on Thursday.

“The measles virus will always find unvaccinated children,” said Henrietta Fore, executive director of the United Nations children’s fund UNICEF, adding: “The ground for the global measles outbreaks we are witnessing today was laid years ago.” The UNICEF report said an estimated 169 million children missed out on the first dose of the measles vaccine between 2010 and 2017, equating to 21.1 million children a year on average.

As a result of greater vulnerability to the disease, the measles infections worldwide nearly quadrupled in the first quarter of 2019 against the same period in 2018 to 112,163 cases, according to World Health Organisation data. In 2017, some 110,000 people, most of them children, died from measles, up 22 per cent from the year before, UNICEF said.

Measles is a highly contagious disease that can kill and can cause blindness, deafness or brain damage. It is currently spreading in outbreaks in many parts of the world, including in the United States, Europe, the Philippines, Tunisia and Thailand. Two doses of the measles vaccine are essential to protect children and the WHO says 95 per cent vaccine coverage is needed for “herd immunity” against measles.

But due to lack of access, poor health systems, complacency, and in some cases fear or scepticism about vaccines, UNICEF said, the global coverage of the first dose of the measles vaccine was reported at 85 per cent in 2017, a level that has remained similar for the past decade. Global coverage for the second dose is even lower, at 67 per cent.

Among high-income countries, the United States, which currently is fighting its biggest measles outbreak in almost 20 years, topped UNICEF’s list of places with the most children missing the first dose of the vaccine between 2010 and 2017, at more than 2.5 million.

Next come France and Britain, with more than 600,000 and 500,000 unvaccinated children, respectively, during the same period. In poorer countries, however, the situation is “critical”, UNICEF’s report found. Nigeria in 2017, for example, had the highest number of children under one year old who missed out on the first dose, at nearly 4 million. It was followed by India, with 2.9 million, Pakistan and Indonesia, with 1.2 million each and Ethiopia, with 1.1 million.

Fore said measles was “far too contagious” a disease to be ignored and urged health officials to do more to fight it. “If we are serious about averting the spread of this dangerous but preventable disease, we need to vaccinate every child, in rich and poor countries alike,” she said.