Erectile dysfunction in men can be treated with stem cells 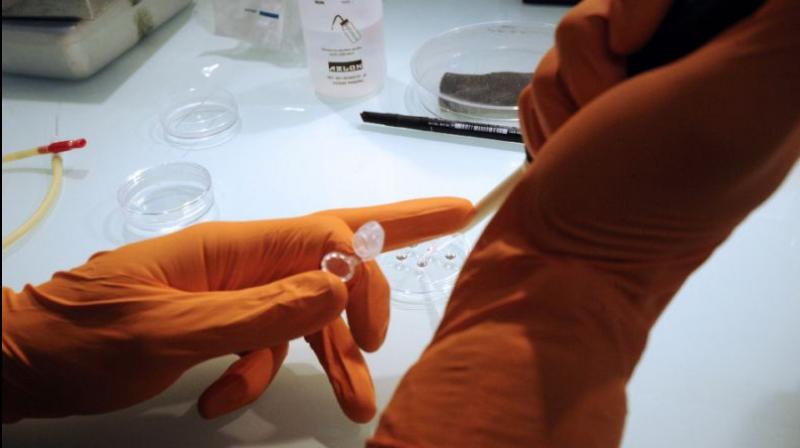 The stem cell therapy can help people suffering from diabetes, cardiovascular disease to get a better erection. (Photo: AFP)

Paris: Men unable to have an erection after prostate surgery enjoyed normal intercourse thanks to stem cell therapy, scientists are to report Saturday at a medical conference in London.

In first-phase clinical trials, eight out of 15 continent men suffering from erectile dysfunction had sex six months after the one-time treatment, without recourse to drugs or penile implants.The positive result showed no signs of flagging during a subsequent year-long monitoring period.

"As far as we know, this is the first time that a human study with a 12-month follow up shows that the treatment is lasting and safe," said Lars Lund, a professor at Odense University Hospital in Denmark who took part in the trials.

"That is much better than taking a pill every time you want to have intercourse," he told AFP.The results were promising enough to convince Danish health authorities to authorise so-called phase III "double-blind" randomised trials in which one group of men is given stem cell therapy and another placebos.

Only men recovering from prostate cancer and able to control their bladders will be enrolled in the new experiments, Lund explained by phone.

To perform the procedure, doctors remove fat cells from a patient's abdomen via liposuction.The cells undergo a brief treatment and emerge as all-purpose stem cells, meaning they can mutate into almost any specialised cell in the body.

"We do not cultivate the cells or change them in any way," said Lund's colleague Martha Haahr, head researcher and lead author of a study detailing preliminary results, published last year in EBioMedicine.The stem cells are then injected with a syringe into the penis, where they spontaneously begin to change in to nerve and muscle cells, as well as the endothelial cells that line blood vessels.

Men are under general anaesthesia while all of this happens, and are discharged from hospital the same day. Prostate surgery is responsible for about 13 percent of erectile dysfunction cases. Up to 80 percent of men experience difficulty having sex immediately after an operation, previous research has shown.

Diabetes accounts for 40 percent of erectile dysfunction cases, and vascular disease another 30 percent.Men with diabetes would be the next target group for clinical trials, Lund said.The results reported at the European Association of Urology conference could be an effective "therapeutic option for patients suffering erectile dysfunction from other causes," Haahr said.

It is estimated that nearly half of men between the ages of 40 and 70 experience erectile dysfunction to some degree.The global market for drugs treating the disorder is expected to top $3.4 billion (3.15 billion euros) by 2019.

Failure to perform sexually can also, in some men, result from relationship problems, performance anxiety or repressed homosexuality, Haahr said.