On account of turning a century old, the institute is hosting a celebration welcoming people across all sectors. 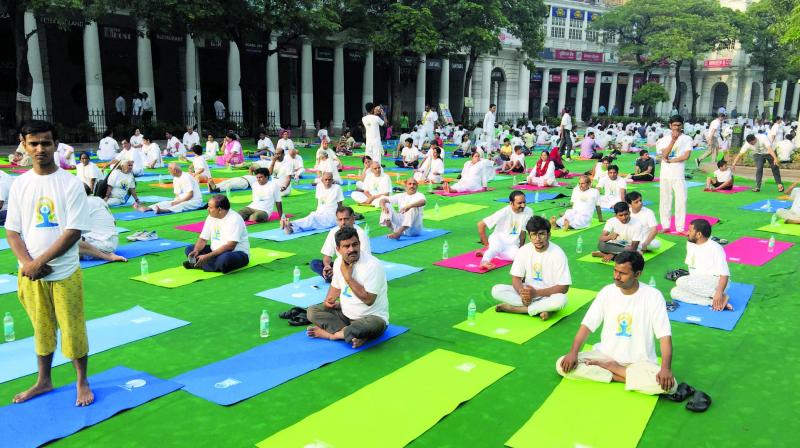 A yoga morning organised by The Yoga Institute in session

Mumbai is home to the world’s oldest organised centre for yoga. For the last hundred years, The Yoga Institute has welcomed not just yogis but also beginners who hope to hone the practice one day. Established in 1918, the aim was spread the message that yoga is more than a practice followed by sadhus and sanyasis. “My grandfather Mani Haribhai Desai, believed that the essence of yoga needed to be passed on to society,” says Hrishi Yogendra, assistant director of the institute.

On account of turning a century old, the institute is hosting a celebration welcoming people across all sectors. “We are having two-day long celebration that will be spread across several elements,” begins Hrishi. Sharing more about the itinerary through the two days, the 28-year-old says, “We have organised awareness programmes, there will also be a yogic exhibition. There will also be international seminars where experienced speakers from different international institutions will be discussing yoga and its culture,” he lists. Adding that the subject for the discussion delves deeper into the culture of yoga, Hrishi says he is looking forward to learn more about the practice himself.

Conducted in St Xavier’s College, Hrishi reveals that there is a reason behind hosting the celebration on the college premises. “My grandfather gained an interest in yoga when he was studying in St Xavier’s. So we thought there is no better way than to celebrate there,” reveals Hrishi. “In fact, he met his guru, Paramhamsa Madhavadas, in the college only,” he says.

Over the two-days, the first day will see the inauguration of their new year-long programmes aimed at spreading awareness and knowledge about yoga. “After the inauguration, we have doctors there who will be conducting free OPD counselling, where people can get expert information on how yoga can benefit their ailments,” he says.

The institute is known for its contribution to society in the field of yoga. From conducting workshops and drives across the city, Hrishi says that The Yoga Institute also organises special classes. “We host a number of social events as well.  We teach yoga to police commandos, hold workshops and classes for children studying in BMC schools, and more,” he says.

Even though yoga has its roots in India, the practice isn’t as connected to its natives as it is abroad. “Today, people internationally know more about yoga than we ourselves do! There is no connect with the practice,” rues Hrishi adding that people almost always approach yoga as a fitness routine. “It is so much more than just a physical routine — it is a way of life. And that is what we aim to change,” he says.