Stethoscope battles it out with new devices

Is the stethoscope dying? High-tech rivals pose a threat. 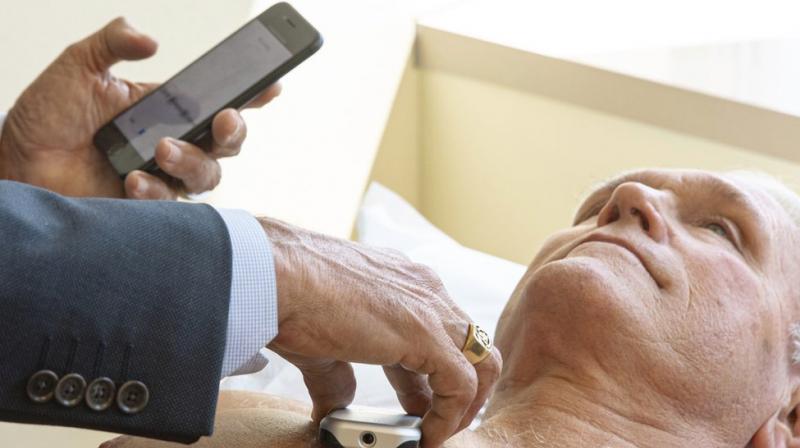 Chicago: Two centuries after its invention, the stethoscope -the very symbol of the medical profession - is facing an uncertain prognosis. It is threatened by hand-held devices that are also pressed against the chest but rely on ultrasound technology, artificial intelligence and smartphone apps instead of doctors’ ears to help detect leaks, murmurs, abnormal rhythms and other problems in the heart, lungs and elsewhere. Some of these instruments can yield images of the beating heart or create electrocardiogram graphs.

Dr Eric Topol, a world-renowned cardiologist, considers the stethoscope obsolete, nothing more than a pair of “rubber tubes.” It “was OK for 200 years,” Topol said. But “we need to go beyond that. We can do better.”

In a longstanding tradition, nearly every U.S. medical school presents incoming students with a white coat and stethoscope to launch their careers. It’s more than symbolic — stethoscope skills are still taught, and proficiency is required for doctors to get their licenses.

Over the last decade, though, the tech industry has downsized ultrasound scanners into devices resembling TV remotes. It has also created digital stethoscopes that can be paired with smartphones to create moving pictures and readouts.

Proponents say these devices are nearly as easy to use as stethoscopes and allow doctors to watch the body in motion and actually see things such as leaky valves. “There’s no reason you would listen to sounds when you can see everything,” Topol said. At many medical schools, it’s the newer devices that really get students’ hearts pumping.

“Wow!” ″Whoa!” ″This is awesome,” Indiana University medical students exclaimed in a recent class as they learned how to use a hand-held ultrasound device on a classmate, watching images of his lub-dubbing heart on a tablet screen.

The Butterfly iQ device, made by Guilford, Connecticut-based Butterfly Network Inc., went on the market last year. An update will include artificial intelligence to help users position the probe and interpret the images.

Students at the Indianapolis-based medical school, one of the nation’s largest, learn stethoscope skills but also get training in hand-held ultrasound in a program launched there last year by Dr Paul Wallach, an executive associate dean. He created a similar program five years ago at the Medical College of Georgia and predicts that within the next decade, hand-held ultrasound devices will become part of the routine physical exam, just like the reflex hammer.

The devices advance “our ability to take peek under the skin into the body,” he said. But Wallach added that, unlike some of his colleagues, he isn’t ready to declare the stethoscope dead. He envisions the next generation of physicians wearing “a stethoscope around the neck and an ultrasound in the pocket.”

Modern-day stethoscopes bear little resemblance to the first stethoscope, invented in the early 1800s by Frenchman Rene Laennec, but they work essentially the same way.

Laennec’s creation was a hollow tube of wood, almost a foot long, that made it easier to hear heart and lung sounds than pressing an ear against the chest. Rubber tubes, earpieces and the often cold metal attachment that is placed against the chest came later, helping to amplify the sounds.

When the stethoscope is pressed against the body, sound waves make the diaphragm — the flat metal disc part of the device — and the bell-shaped underside vibrate. That channels the sound waves up through the tubes to the ears. Conventional stethoscopes typically cost under USD 200, compared with at least a few thousand dollars for some of the high-tech devices.

But picking up and interpreting body sounds is subjective and requires a sensitive ear — and a trained one. With medical advances and competing devices over the past few decades, “the old stethoscope is kind of falling on hard times in terms of rigorous training,” said Dr James Thomas, a cardiologist at Northwestern Medicine in Chicago. “Some recent studies have shown that graduates in internal medicine and emergency medicine may miss as many of half of murmurs using a stethoscope.”

Northwestern is involved in testing new technology created by Eko, a Berkeley, California-based maker of smart stethoscopes. To improve detection of heart murmurs, Eko is developing artificial intelligence algorithms for its devices, using recordings of thousands of heartbeats. The devices produce a screen message telling the doctor whether the heart sounds are normal or if murmurs are present.

Dennis Callinan, a retired Chicago city employee with heart disease, is among the study participants. At age 70, he has had plenty of stethoscope exams but said he feels no nostalgia for the devices. “If they can get a better reading using the new technology, great,” Callinan said.

Chicago paediatrician Dr Dave Drelicharz has been in practice for just over a decade and knows the allure of newer devices. But until the price comes down, the old stalwart “is still your best tool,” Drelicharz said. Once you learn to use the stethoscope, he said, it “becomes second nature.”

“During my work hours in my office, if I don’t have it around my shoulders,” he said, “it’s as though I was feeling almost naked.”