Scuba diving may damage your teeth 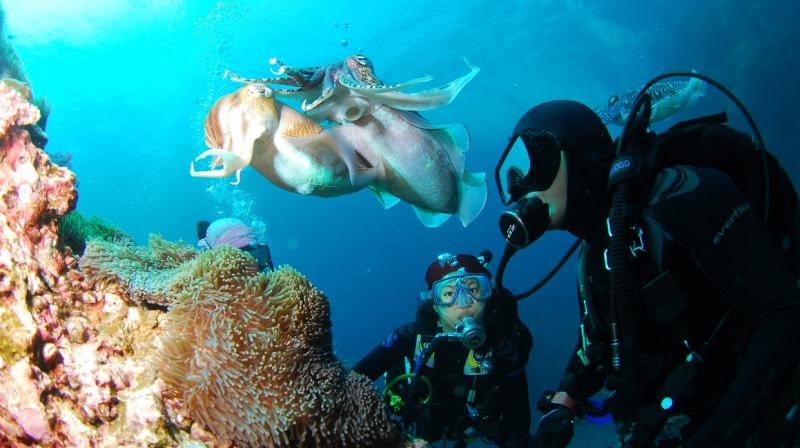 If the air supply regulator is held in the mouth, any disorder in the oral cavity can potentially increase the diver's risk of injury. (Photo: Pixabay)

New York: Scuba divers may want to stop by a dentist's clinic before taking their next plunge, according to researchers, including one of Indian origin, who found that nearly half of divers experience dental symptoms in water, including jaw pain and broken fillings.

Due to the constant jaw clenching and fluctuations in the atmospheric pressure underwater, divers may experience symptoms that range from tooth, jaw and gum pain to loosened crowns and broken dental fillings, researchers said. Recreational divers should consider consulting with their dentist before diving if they recently received dental care, said lead author Vinisha Ranna from the University at Buffalo (UB) in the US."Divers are required to meet a standard of medical fitness before certification, but there are no dental health prerequisites," said Ranna.

"Considering the air supply regulator is held in the mouth, any disorder in the oral cavity can potentially increase the diver's risk of injury. A dentist can look and see if diving is affecting a patient's oral health," she said. The research was inspired by Ranna's first experience with scuba diving in 2013. Although she enjoyed being in the water, she could not help but notice a squeezing sensation in her teeth, a condition known as barodontalgia.

She created an online survey that was distributed to 100 certified recreational divers. Those who were under 18-years-old, ill or taking decongestant medication were
excluded. Her goal was to identify the dental symptoms that divers experience and detect trends in how or when they occur. Of the 41 participants who reported dental symptoms, 42 per cent experienced barodontalgia, 24 per cent described pain
from holding the air regulator in their mouths too tightly and 22 per cent reported jaw pain.

Another five per cent noted that their crowns were loosened during their dive, and one person reported a broken dental filling. "The potential for damage is high during scuba diving," said Ranna. "The dry air and awkward position of the jaw while clenching down on the regulator is an interesting mix. An unhealthy tooth underwater would be much more obvious than on the surface. One hundred feet underwater is the last place you
want to be with a fractured tooth," she said.

The study also found that pain was most commonly reported in the molars and that dive instructors, who require the highest level of certification, experienced dental symptoms
most frequently. This frequency is likely attributed to more time spent at shallower depths where the pressure fluctuations are the greatest, said Ranna. The study was published in the British Dental Journal.